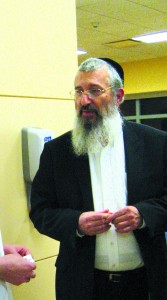 Dr. Yoram Bental, who as longtime director of the Laniado Hospital’s neonatal intensive-care unit, built the Sanz-Klausenburger Rebbe’s dream of a world-class hospital in Netanya into a reality, was niftar on Friday after a long illness, his life changed by the hospital as much as he changed it. He was 60.

“He was one of a kind,” Rabbi Aharon Yeshaya Spitzer, a Laniado trustee, told Hamodia on Sunday. “You only had to tell him once and he pursued it to the end.”

Rabbi Spitzer emphasized that besides for Dr. Bental’s reputation as a top-notch doctor, he was also a tremendous talmid chacham, who utilized all his spare time for learning Torah.

In an interview with Hamodia three years ago, Dr. Bental said that the first he heard of Klausenburg was in 1994, when as a secular doctor he was on his way to work when he passed a convoy of hundreds of cars. It was the levayah of Harav Yekusiel Yehudah Halberstam, zt”l, the Rebbe whose miraculous survival from the Holocaust inspired him to create a life-giving hospital.

Dr. Bental came from a family of physicians. His father, Professor Ephraim Bental, arrived in Israel from Germany with his father, also a neurosurgeon, in 1933. Now 89-years-old, he is the former head of the neurology departments in two hospitals in Haifa.

Dr. Bental himself held a promising career by the mid-1990s, working in Haifa’s Carmel Hospital and serving as president of Israel’s Neonatology Association. But as he drew closer to Yiddishkeit, he consulted with Harav Yitzchak Zilberstein about where to pursue his career.

Harav Zilberstein advised him to go to Laniado. So although he never moved to Netanya, and never counted himself a Chassid, he applied for the position and was accepted.

For 13 years, Dr. Bental would make the hour-long commute two or three times a week; the other days, with all his children married, he would sleep in his office.

Dr. Bental was determined to make Laniado’s maternity ward competitive with the top hospitals in the country. To that end, one of his first rules was that babies requiring special needs would not be automatically transferred to other hospitals for treatment.

It took some convincing, but staffers were gradually drawn over to his methods. Today, aside from cardiac surgery, all neonatal operations are performed on site.

Dr. Bental’s expertise was quickly noticed by women, both local and overseas. By 2007, seven years after his arrival at the hospital, they were catering to patients from across the state — including 40 percent of whom are non-religious. Laniado has about 7,000 deliveries a year.

However, Dr. Bental ascribed all credit to others, insisting that credit goes to the head nurse who was devoted, the hospital director who took personal care, the Rebbe’s blessings, the willingness of staff to work overtime, to volunteer for extra work.

But he forgot to mention himself. That came from others. They talked of the devotion with which Dr. Bental went about his job, the way he stood with the families of the patients through their triumphs and disappointments.

Even the interview with Hamodia only came about since he accompanied the family of a patient to surgery in New York.

“It was very reassuring to the family,” he said simply. “Because I had this special connection with them all these years I felt that … the family will probably feel better if I would be around.”

When his proficiency became more renowned, for a while he was head of Bnei Brak’s Mayanei Hayeshuah medical center.

Born in Israel in 1954, Yoram Bental received his medical degree at Haifa’s Technion.

Dr. Bental was diagnosed with cancer a while back, but he didn’t want to worry his friends so he sought treatment outside of Laniado. He would still come in regularly to check up on his patients, until several months ago, when he was no longer able to do so.

He was niftar on Friday morning; his levayah in Netanya drew huge crowds.

Dr. Bental is survived by his parents, wife, five children and about 20 grandchildren.

When he was asked during the interview how he felt, as a third- generation doctor, that his two sons and three sons-in-law were all learning in kollel, he had an immediate response.

This article appeared in print on page 1 of the May 12th, 2014 edition of Hamodia.