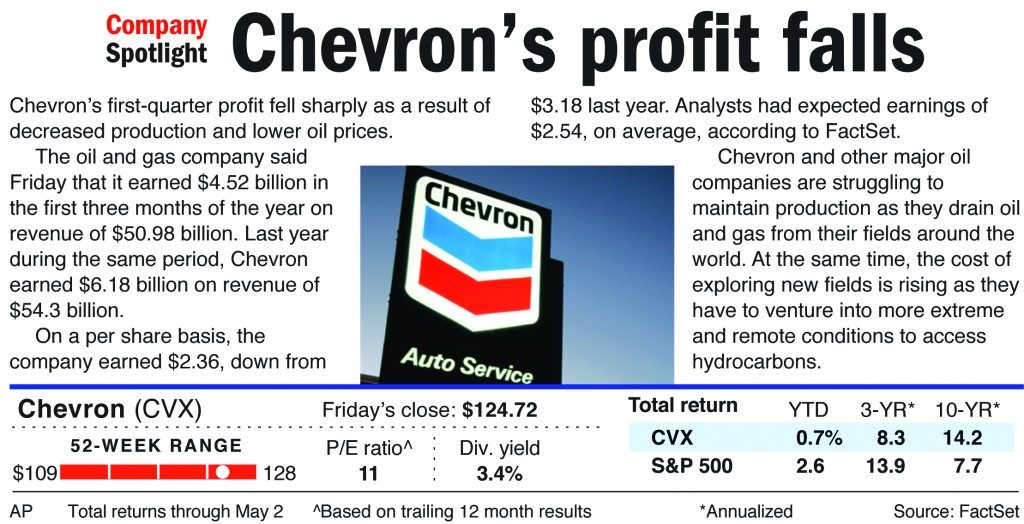 Chevron Corp. profits plunged 27 percent during the first quarter of this year, with its earnings of $4.51 billion squeezed by weaker oil prices and slumping production levels, the energy giant reported Friday.

The company’s profits of $2.36 a share fell short of Wall Street’s expectations of $2.51, and revenue of $53.3 billion missed analysts’ predictions of $57 billion.

“Our first-quarter earnings were down from a year ago, primarily due to lower prices and volumes for crude oil,” Chevron CEO John Watson said in a prepared release. “Crude prices were tempered by global economic factors, while our current year production volumes were affected by weather-related, unplanned downtime, particularly in Kazakhstan.”

In recent years, much of Chevron’s focus has been on its upstream – exploration, development and production of oil and natural gas – which has also become a big driver of company profits.

San Ramon, Calif.-based Chevron has struggled to raise production levels in recent quarters. During the recent January-March period, production totaled the equivalent of 2.59 million barrels of oil, down 2.3 percent from the year-ago first quarter.

But Chevron believes production will increase in 2015 and reach a growth rate of 20 percent in 2017, as big projects such as a liquefied-natural-gas facility in western Australia and other efforts come on line with energy supplies.

“We continue to advance our key development projects, and we are anticipating production growth in 2015 and beyond as a result of these investments,” Watson said.