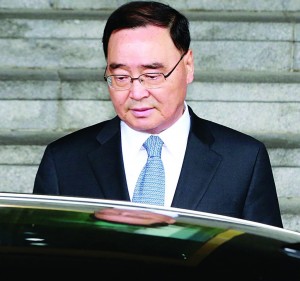 South Korea’s prime minister resigned Sunday over the government’s handling of a ferry sinking that has left more than 300 people dead or missing and led to widespread shame, fury and finger-pointing, blaming “deep-rooted evils” in society for the tragedy.

South Korean executive power is largely concentrated in the president, so Chung Hong-won’s resignation appears to be symbolic. Presidential spokesman Min Kyung-wook said President Park Geun-hye would accept the resignation, but did not say when Chung would leave office.

Chung’s resignation comes amid indignation over claims by the victims’ relatives that the government did not do enough to rescue or protect them. Most of the dead and missing were high school students on a school trip.

Officials have taken into custody all 15 people involved in navigating the ferry Sewol, which sank April 16. A prosecutor revealed that investigators were also looking into communications made as the ship sank, between a crew member and the company that owns the ferry.

Chung was heckled by victims’ relatives and his car was blocked when he visited a shelter on an island near the site of the sinking a week ago. On Sunday, he gave his reasoning for the resignation.

“As I saw grieving families suffering with the pain of losing their loved ones and the sadness and resentment of the public, I thought I should take all responsibility as prime minister,” Chung said. “There have been so many varieties of irregularities that have continued in every corner of our society and practices that have gone wrong. I hope these deep-rooted evils get corrected this time and this kind of accident never happens again.”

Meanwhile, senior prosecutor Yang Jung-jin said that two helmsmen and two members of the steering crew who were detained Saturday had been formally arrested. Eleven other crew members, including the captain, had been arrested earlier.

Yang also said that a crew member called the ship’s owner, Chonghaejin Marine Co. Ltd., as the ferry was listing, but declined to disclose whether the caller was the captain. Local media reported that the captain called for company approval of an evacuation. Prosecutors said they are analyzing the content of communications between the ship and the company.

The arrested crew members are accused of negligence and of failing to help passengers in need. Capt. Lee Joon-seok initially told passengers to stay in their rooms and took half an hour to issue an evacuation order, by which time the ship was tilting too severely for many people to get out.

Divers have recovered 188 bodies and 114 people are believed to be missing, though the government-wide emergency task force has said the ship’s passengers list could be inaccurate. Only 174 people survived, including 22 of the 29 crew members.

The seven surviving crew members who have not been arrested or detained held non-marine jobs such as chef or steward, according to Yang.

The ferry was carrying an estimated 3,608 tons of cargo, according to an executive of the company that loaded it. That far exceeds what the captain claimed in paperwork — 150 cars and 657 tons of other cargo, according to the coast guard — and is more than three times what an inspector who examined the vessel during a redesign last year said it could safely carry.

Yang said that the cause of the sinking could be excessive veering, improper stowage of cargo, modifications made to the ship and tidal influence. He said investigators would determine the cause by consulting with experts and using simulations.

This article appeared in print on page 3 of the April 28th, 2014 edition of Hamodia.