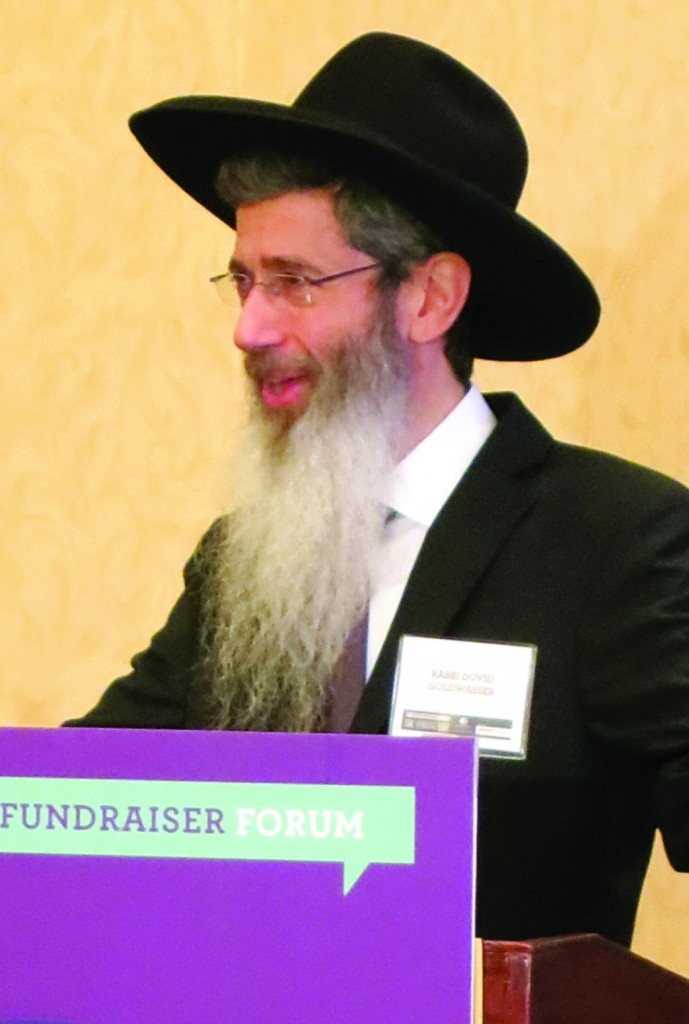 For many residents of Flatbush, a key component of their preparations for Pesach is the Shabbos Hagadol drashah delivered by Harav Dovid Goldwasser, Rav of Khal Bnei Yitzchok.

The drashah will take place, iy”H, Shabbos Parashas Acharei Mos at 5:45 p.m. in the auditorium of Shulamith High School at 1277 East 14th Street (entrance on Chestnut Avenue, near Avenue M). As usual, people are expected to walk in from various neighborhoods for the much-anticipated annual event.

This year’s drashah is dedicated to all the children in Klal Yisrael who need a refuah shleimah and pirkei Tehillim will be recited in their zechus. Those who have other names they wish to be included in these tefillos may submit them at the drashah. Recently, Rav Goldwasser met two of these children — Refoel Elisha Meir ben Devorah and Chaim Shmuel ben Sarah — and their parents. After the visit Rav Goldwasser noted that the Chasam Sofer states that a powerful zman of hisorerus is created when a large tzibbur gathers, and that it is imperative for us to do whatever is possible as a zechus for the children’s recovery.

In past years, Hamodia featured selected highlights of Rav Goldwasser’s drashah in its Pesach issue. Since this year Shabbos Hagadol falls only two days before Erev Pesach, making it impossible to run them in the paper, Rav Goldwasser has kindly consented to provide the following insights in advance to share with our readers.

Harav Yosef Shalom Elyashiv, zt”l, in discussing the symbolism of wine in the Torah, comments on an ostensible inconsistency. Maseches Brachos 35a states “A song of praise is sung only over wine.” Yet, we learn in maseches Yoma 76b, “Wine brings lamentation into the world.” We use wine for mitzvos such as Kiddush, Havdalah and Arba Kosos, yet the Nazir is forbidden to drink wine since it compromises his state of holiness.

To reconcile this disparity Harav Elyashiv cites the Gemara in Maseches Sanhedrin 70a which notes the Torah’s defective spelling of the word for wine, without a vov, which would be read as tirash. Yet, this word is actually pronounced tirosh. From this the Gemara learns, “If one has merits (i.e. he drinks in moderation), he will become a leader (rosh); if he does not merit (he overindulges), he becomes impoverished (rash).” Harav Elyashiv notes that the outcome depends on the circumstances. In Parashas Toldos, Yaakov Avinu brought wine with the food his mother Rivkah had prepared when he approached Yitzchak for the brachos since he understood wine’s benefits and purity, as it says, “And may Hashem give you … abundant grain and wine.” Therefore, Yitzchak’s brachah to Yaakov included wine. Eisav, however, due its intoxicating power, did not bring wine, so that his father would bless him with a clear mind. Accordingly, Yitzchak’s blessing to Eisav was “…of the fatness of the earth shall be your dwelling and of the dew of the heavens from above,” since wine would not be beneficial for him.

In the Haggadah we read, “V’HaKadosh Baruch Hu matzileinu miyadam” — Hashem delivers us from the hands of our enemies.” Harav Ovadiah Yosef, zt”l, comments that Hashem orchestrates events in such a way that Klal Yisrael’s salvation can be effected even via
their oppressors. In Mitzrayim, Moshe Rabbeinu, the redeemer of Klal Yisrael, was raised in the palace of Pharaoh. Similarly, in the Purim story, Haman was the one who suggested to Achashverosh that Vashti should be killed. Chazal tell us (Megillah 12b) that Memuchan is identical with Haman and he was so called because he was destined for punishment. It was through his own pronouncement that Esther came to power and Klal Yisrael was eventually saved.

When people observe the various crises and occurrences that abound in the world in our times they are liable to become despondent. However, all must remember that the Yad Hashem is directing all these developments. The very situations that seem injurious to Klal Yisrael or Eretz Yisrael in the present will ultimately lead to our redemption, as alluded to in the Haggadah — “V’HaKadosh Baruch Hu matzileinu miyadam.”

These and many additional insights, thoughts and stories will inspire all those who attend the drashah. Minchah will follow at Khal Bnei Yitzchok, 1433 East 19th Street (bet. Avenues K-L).