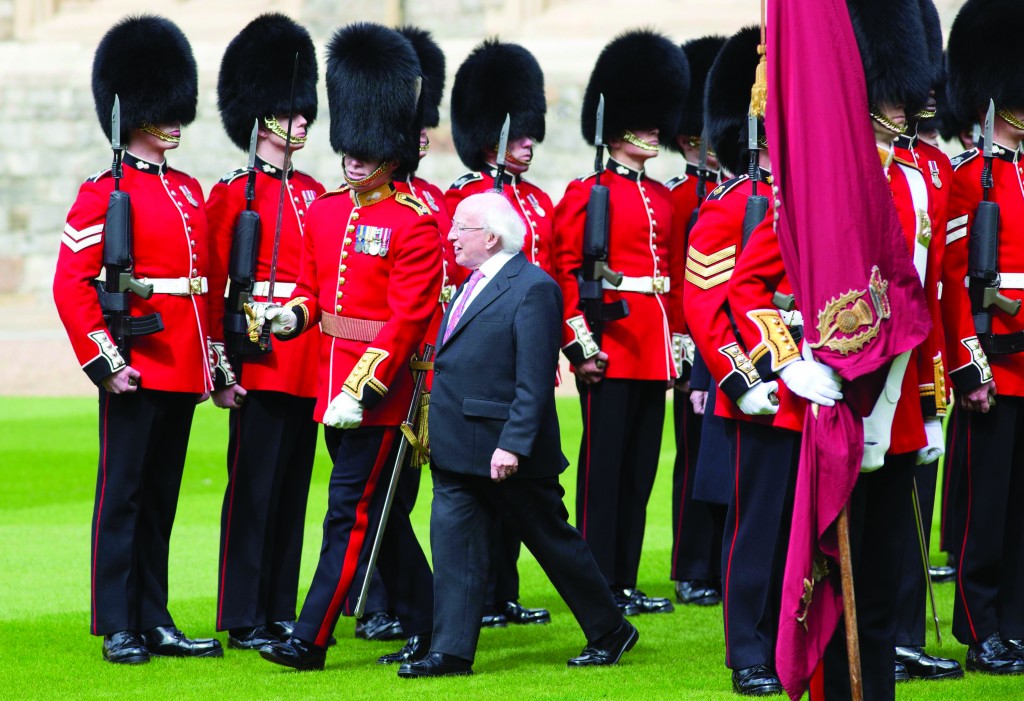 Ireland’s president was welcomed with regal pomp to Queen Elizabeth II’s Windsor Castle home on Tuesday, opening a state visit heavy with symbolism for two countries with a tangled and troubled history.

President Michael D. Higgins’ visit is the first by an Irish head of state since Ireland threw off British rule almost a century ago, and a sign of how Northern Ireland’s peace process has transformed relations between two one-time enemies.

Higgins — a veteran left-wing politician, poet and human rights activist — said it was impossible to “wipe the slate clean” about the past, but relations between the two countries were good.

A military band played the Irish national anthem as Higgins and his wife Sabina were welcomed by the queen and her husband Prince Philip in the castle quadrangle. The streets of the town, west of London, were bedecked in Irish tricolors and Union Jacks.

Higgins will address both houses of Britain’s Parliament — another first — during his three-day trip, which includes a banquet Tuesday evening at the castle, hosted by the queen.

Among the guests will be Martin McGuinness, once a senior Irish Republican Army commander, now Northern Ireland’s deputy leader. His presence at the queen’s table would have been unthinkable — by both sides — just a few years ago.

The IRA killed nearly 1,800 people during its 27-year campaign of violence aimed at wresting Northern Ireland from Britain, among them the queen’s cousin, Lord Louis Mountbatten. Experts say McGuinness was the IRA’s chief of staff when the group assassinated Mountbatten in 1979.

Much has changed since an IRA cease-fire and the U.S.-brokered Good Friday peace accord for Northern Ireland in 1998. The IRA-linked Sinn Fein party serves in Northern Ireland’s power-sharing administration alongside British Protestants.

In 2011, the queen became the first reigning British monarch to visit the Republic of Ireland. The following year she and McGuinness shook hands in a brief but minutely choreographed meeting.

For all its symbolism of progress and reconciliation, McGuinness’ invitation to the royal banquet dismayed some victims of Northern Ireland’s violence.

Stephen Gault, whose father died in an IRA bombing, said it was “another nail in the coffin of the innocent victims of terrorism.”

Gault told the BBC that he “would like to see Mr. McGuinness behind bars for his crimes.”

“Yes, we all want peace, but peace at what cost? It’s been a dirty peace so far.”