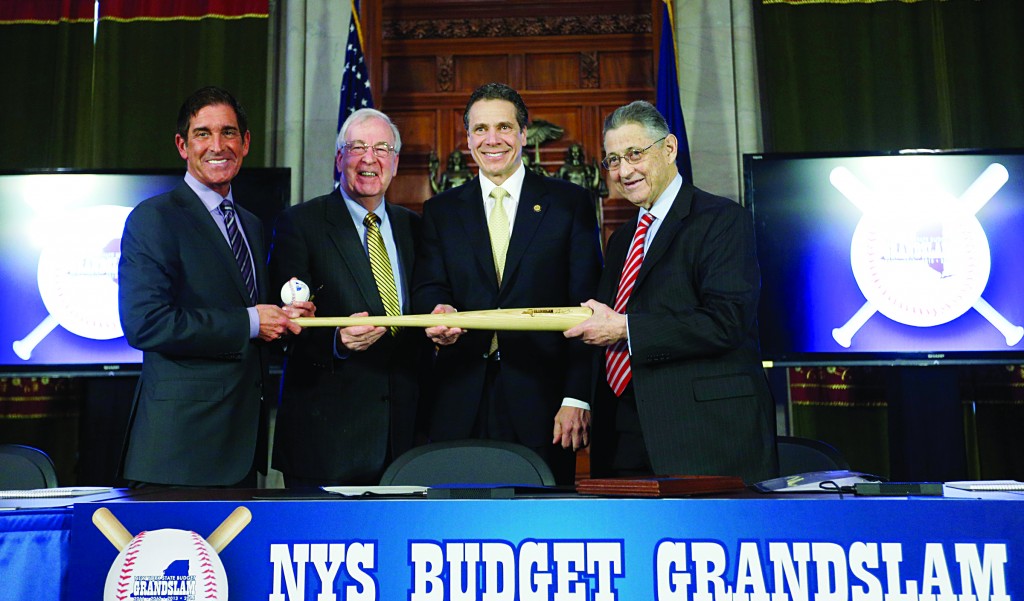 The nearly $140 billion budget deal signed by Gov. Andrew Cuomo late Monday left tuition-paying parents deeply disappointed, with the failure of a historic education tax-credit proposal, which would have provided a dollar-for-dollar tax credit for donations for education.

The collapse of the bill spearheaded by Brooklyn state Senators Simcha Felder and Marty Golden, which had already passed the state Senate, rankled Orthodox and other religious groups.

“Let no individual or organization try to convince anyone that this budget is good for tuition-paying parents or New York state’s children,” Felder told Hamodia on Sunday. “We have to stop being satisfied with the crumbs that they give us and demand what is rightfully ours.”

The education tax-credit proposal came as close as it ever did to passing last week, decades after a blue ribbon commission headed by a former governor first suggested it to state lawmakers. Its failure overshadowed some of the other good news in the budget, such as making permanent free transportation for late homecoming yeshivah students.

“In the real world they didn’t give us anything,” said one disappointed askan who was close to the negotiations.

“We, of course, appreciate the positive provisions of the budget,” Rabbi Chaim Dovid Zwiebel, Agudath Israel’s executive vice president, said in a statement, “but the rejection of EITC is a difficult pill to swallow.”

James Cultrara, director of education for the New York Catholic Conference, was critical in a conversation with Hamodia.

“There was tremendous growth in the budget in terms of public schools,” Cultrara noted. “Frankly, given all that was in the state budget, tuition-paying families should be enormously disappointed that their needs were unaddressed. It is patently unfair and leaves them continuing to shoulder a dual burden of tuition and taxes supporting public schools.”

He expressed his disappointment with the governor who had told Cardinal Timothy Dolan of the New York Archdiocese during a rally in Albany two weeks ago that he was “in support” of the tax credit.

Cultrara said that his next step would be to “make known” to his constituency that “ultimately, the governor and legislative leaders let them down.”

Assemblyman Dov Hikind said that the budget’s message was that the state’s children are unequal before the legislature.

“Never could I have imagined that the message of this year’s budget would be that education is important for all children in New York State, unless you attend a yeshivah or a parochial school,” Hikind said in a statement. “This was the one legitimate way to bring relief to parents struggling, whether sending their children to a yeshivah or to a private or parochial school. It would have benefitted parents of public school children as well.”

However, the Orthodox Union in a press release Friday thanked Cuomo and the legislature for the “unprecedented amount of funding for non-public schools” in the budget, not mentioning the failed education tax credit.

In other issues related to yeshivos, the state increases funding for mandated services and CAP (comprehensive attendance policy) reimbursements. For the first time, it also begins repaying the state’s longstanding CAP debt to nonpublic schools.

The nearly $160 million appropriation for both programs represents an increase of more than $21 million. But of that additional amount, $16 million was owed from previous years, while an additional $10 million is still outstanding.

More significant than CAP funding is that funding for late-hour school transportation services has been increased and made permanent in a bill sponsored by Felder last year which particularly benefits yeshivah students, who come home after the regular 4:00 deadline.

Also in the budget is funding for school safety equipment and inclusion in a proposed $2 billion state bond to upgrade technology in schools. The bond issue, if approved by voters in a November referendum, may not benefit yeshivos, since it provides unfettered internet access to students.

But the crown jewel of the budget as it relates to the private education community was to have been the EITC, a proposal which would have allocated $150 million for the coming fiscal year, and then $225 million and $300 million for the two following fiscal years. Half of those funds would have been earmarked for tax credits for private and business sector contributions to private school scholarship funds for needy students.

One particular detail that needles activists is the fact that the state’s nearly 3 million public school students received a whopping increase of $1.5 billion for a total of $21 billion. However, the approximately 400,000 non-public school students got less than $200 million in total funding, including textbooks, computers, CAP and mandated services.

This equals to less than 1 percent for a student population that is about 8 percent of the state.

The concept of an education tax credit, which would decrease a donor’s state tax bill by the amount of money contributed to an education fund, was first suggested in 1993 by a blue ribbon commission headed by former Gov. Hugh Carey and state Sen. Seymour Lachman.

Orthodox askanim had worked together with the Catholic Conference to attempt to have it inserted in several state budgets in a way that would not arouse traditional opposition from the powerful teachers’ unions. But although the GOP Senate passed it twice before, they never had the support of the Assembly and governor as they thought they did this year.

Circumstances had appeared favorable, with the GOP Senate on board and Cuomo promising Cardinal Dolan that he would support it.

However, on Thursday night, Felder issued an emergency message, saying that its passage was being held up by Cuomo and Assembly Speaker Sheldon Silver. He urged a call-in campaign to their offices to say that voters care about the tax credit.

“I am in Albany working tirelessly to get the Education Tax Credit bill passed,” Felder wrote in a statement widely disseminated in the Orthodox media. “At this time, the New York State Assembly Speaker and the Governor are preventing this from happening.”

Thousands of people, if not more, called over the following 18 hours. At one point, the speaker’s office closed down the lines due to the heavy call traffic.

In the final budget deal, however, worked out by Cuomo, Silver and the two co-leaders of the Senate — Republican Dean Skelos and Independent Democrat Jeff Klein — it was entirely excluded from the budget.

“The EITC would not have been just another nice program for the nonpublic school community,” Rabbi Zwiebel said. “It would have been a real game-changer, a program that would have generated tens of millions of dollars annually to help needy families whose children attend yeshivos and other nonpublic schools.”

Significantly, Skelos said Monday night in his message that the fight to pass the tax credit was not yet over, suggesting what some have said would be a push over the summer to pass it.

Cultrara of the Catholic Conference said that the battle for equity continues.

“We’ve been fighting for it in a concerted way for ten years,” he told Hamodia on Tuesday. “I can’t say whether or not we’ll have an opportunity this year or next year or when there is a different governor or when the makeup of the legislature is different, it’s hard to say. But we will keep on fighting, there is no end to our efforts to fight for tuition-paying families.”

“I get disappointed and frustrated — and, to be honest, angry — when the children in our Catholic schools are treated like second-class citizens again and again. State leaders missed a great opportunity to show their real commitment to the education of all students across New York. Sadly, once again, they’ve divided our kids into winners and losers.”

The credit, the cardinal noted, was supported by business groups and unions alike, and would have amounted to less than 0.1 percent of the budget.

“The state already gives tax credits for everything from movie productions to beer brewers,” he asked. “Why not one for children’s education?”

Dolan said that when he met with elected officials in Albany recently, “we received plenty of assurances that the tax credit was a ‘no-brainer,’ that it had plenty of support and that, for the first time, Catholic-school students wouldn’t be left by the wayside.

“Sadly, those assurances turned out to be empty.”

He said that the $3.8 billion paid in tuition each year — on top of the taxes which pay for public schools — saves taxpayers $9 billion a year.

“Just imagine for a moment that all Catholic schools across the state closed their doors, and the public schools had to absorb all our students,” Dolan wondered. “The burden on our towns, counties and cities would be enormous.”