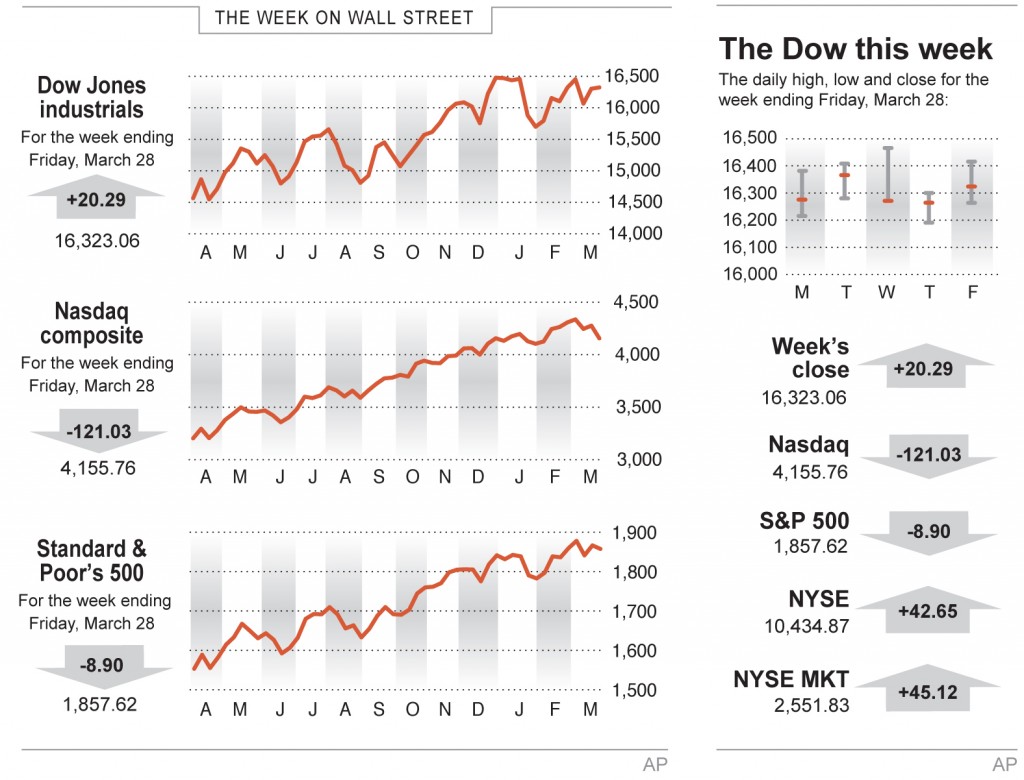 The gains were modest as investors continued to cut their holdings in biotechnology stocks, some of the best performing names of 2013. Instead, the stocks that advanced the most were mostly mature, large companies such as Microsoft, Exxon and Cisco Systems.

The biggest gainer in the Dow was Microsoft, which rose 94 cents, or 2.4 percent, to $40.30. The company announced Thursday that it was bringing Microsoft Office to the iPad and would shift its focus away from Windows, a move that analysts liked. Satya Nadella made the announcement in his first public appearance as the new leader of Microsoft.

“We continue to view (Office on the iPad) as a massive revenue and operating profit opportunity for Microsoft,” analysts at Credit Suisse said in a report Thursday.

In contrast to technology, biotechnology had another horrible day. Gilead Sciences, Biogen Idec and Vertex Pharmaceuticals were all down 4 percent or more.

That momentum stopped dead in the month of March. The S&P 500 Biotechnology index is down 12 percent this month alone, erasing all of the sector’s gains in January and February.

The sell-off in biotech echoes the pullback investors have seen in speculative technology stocks. Those stocks are down between 14 percent and 20 percent this month alone.

“The high-momentum names have lost all the traction they had in the past year,” said John Fox, director of research at Fenimore Asset Management.

Investors were encouraged by news that Americans increased their spending last month, a hopeful sign for an economy that has been slowed by months of severe winter weather. The Commerce Department said consumer spending inched up 0.3 percent, a hair short of economists’ forecasts. Incomes rose at the same pace.

“The economy is now reaching the point where it can shake off the weather-related excuses,” Doug Cote, a market strategist for ING Investment Management, wrote in an email.

Investors will now turn their attention to next week’s economic data, including the March jobs report due out Friday. Economists expect that the U.S. economy, thawing from the harsh winter, created 200,000 jobs last month and the unemployment rate remained steady at 6.6 percent.