Regional Back in N.Y., Bratton Looks to Spread ‘Miracle’ to Other Cities
Regional 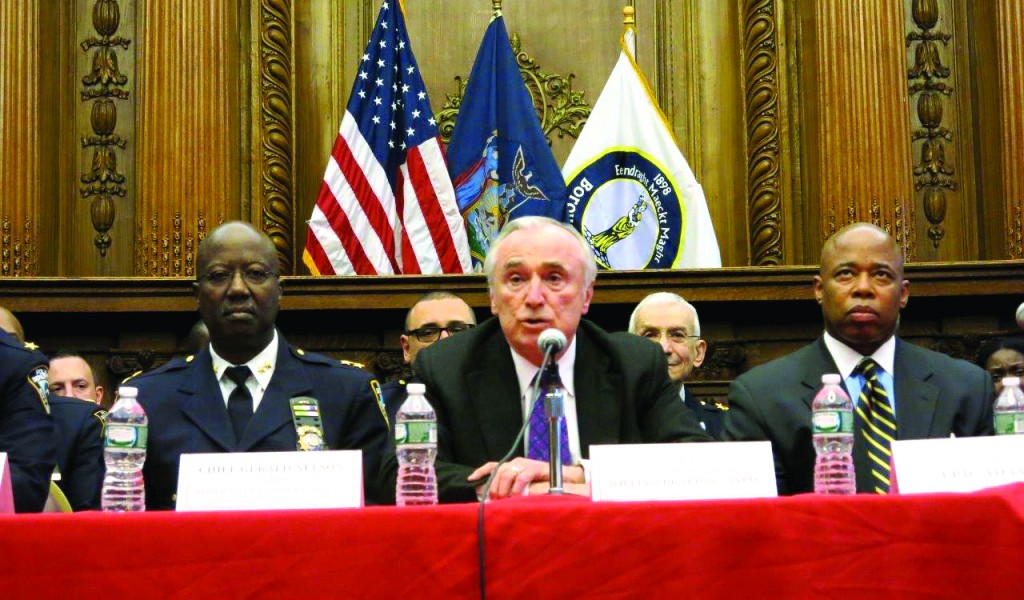 It’s been dubbed the New York Miracle. Bill Bratton, who returned to his former job as the city’s police commissioner in January, says he wants Los Angeles, Chicago and London to experience it too.

He’s talking about a 23-year span in which major crime fell almost 80 percent, creating an aura of safety that was key to revitalizing the five boroughs. The revolution he kicked off, carried on by successors including Raymond Kelly, helped boost housing prices from Harlem to Brooklyn and attract a record 54 million tourists who pumped $58.7 billion into the local economy last year.

New York has led a national decline in crime that goes beyond just police tactics, with the most populous U.S. city posting the steepest drop of any major metropolitan area. Sharing the methods of that success highlights how cities are increasingly collaborating on both local matters such as law enforcement and global challenges such as alleged climate change.

While Bratton retakes command with a reputation that Mayor Bill de Blasio called “nothing short of a legend,” he faces different challenges than he did 20 years ago. Then, most police commanders viewed crime as an intractable feature of urban life.

To counter that mindset, Bratton and his colleagues used a Hewlett Packard 360 personal computer purchased from Wal-Mart to remake police work. They created CompStat, a database to map, categorize and time-stamp crimes and manage dangerous neighborhoods. It was so successful that Bratton, whose first stint at the New York Police Department was from 1994 to 1996, wound up on the cover of Time magazine and as the subject of management studies at Harvard and Yale universities.

“If you take care of the little things, you can prevent a lot of the big things,” Bratton is fond of saying about the so-called Broken Windows approach to law enforcement. As the city’s transit-police chief before taking over the NYPD, he implemented zero-tolerance policies on turnstile jumping and graffiti.

All that has translated into economic gains.

A reduction of one homicide a year in a ZIP code correlates to a 1.5 percent increase in housing values the following year, according to a 2012 study by economists Robert Shapiro and Kevin Hassett.

“Perhaps the most optimistic lesson to take from New York’s experience is that high rates of homicides and muggings are not hardwired into a city’s population, cultures and institutions,” wrote Franklin Zimring, a law professor at the University of California. “The steady, significant and cumulatively overwhelming crime decline in New York is proof that cities as we know them need not be incubators of [crime].”

After leaving New York in 1996 following a falling-out with Giuliani, Bratton, 66, worked as a security consultant before being named chief of the Los Angeles Police Department. During his tenure there from 2002 to 2009, the city’s homicide rate fell to 7.8 per 100,000 residents from 17.1.

Bratton’s collaboration with London’s Metropolitan Police brought him to the attention of Queen Elizabeth II, who in 2009 named him a Commander of the Most Excellent Order of the British Empire. By 2011, he advised British Prime Minister David Cameron following the London riots that year. He became a candidate to run Scotland Yard, an idea rejected due to objections to a non-Briton filling the post.

Bratton now intends to work with officials in Los Angeles, London and other cities to promote exchanges on innovative methods. Los Angeles, for example, could offer New York what it’s learned after years dealing with street gangs. And London’s “ring of steel” securing the financial district may give New York anti-terrorism specialists ideas about protecting Wall Street.

“We will join hands, share technology, training, intelligence, bringing people here and sending people there,” Bratton said on March 4 as he met with the Police Foundation, a group of New York executives who since 1971 have provided financial support to the NYPD.