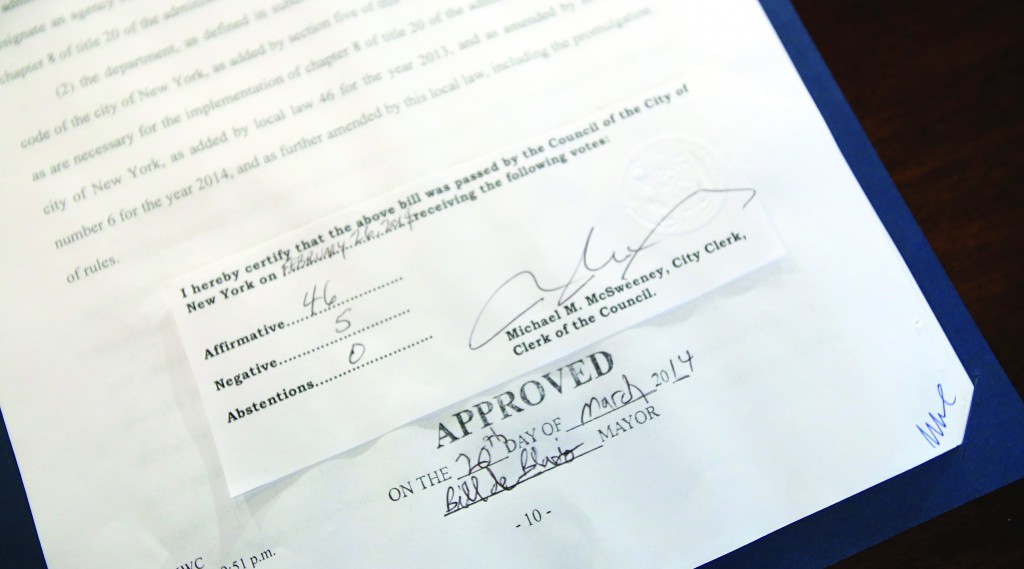 Surrounded by dozens of elected officials and commoners at a Brooklyn ice cream parlor, Bill de Blasio on Thursday signed his first bill into law as mayor, legislation approving paid sick leave for an expanded pool of residents.

The measure allows the right of paid sick leave to approximately a half million New Yorkers whose employers have five or more workers. A previous bill that passed in the frenzy of last year’s mayoral Democratic primary only applied to businesses that had more than 15 workers.

The new law removes the previous exemption for the manufacturing sector, and adds grandparents, grandchildren and siblings to the definition of family members workers can legally care for using paid sick time.

De Blasio signed the bill during an elaborate ceremony at a Brooklyn ice cream manufacturer, which he said was since he wanted to be “where the people are.”

He signed the bill using several pens, which he distributed to legislators who worked to help pass it.

The mayor said the law is “the first of many steps” his administration will undertake to fight the city’s rising income inequality. Paid sick leave took central issue in the primary last year, and contributed to then-frontrunner Council Speaker Christine Quinn’s implosion.

The law goes into effect on April 1.