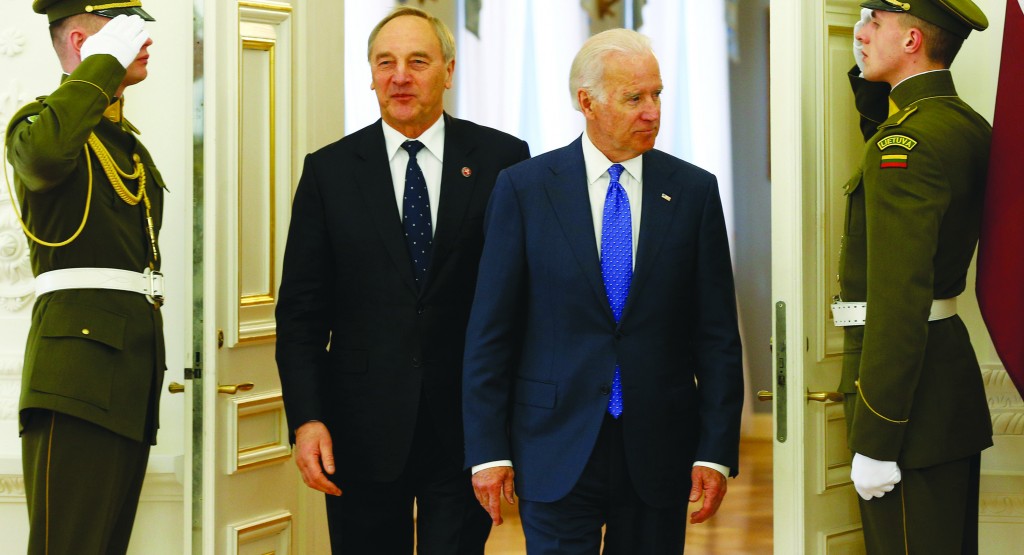 Russian forces seized military installations across the disputed Crimean Peninsula on Wednesday, prompting Ukraine’s security chief to announce that his country will hold joint military exercises with the United States and Britain.

Vice President Joe Biden was in Lithuania, trying to reassure nations along Russia’s borders who were terrified by the sight of an expansion-minded Moscow.

“We’re in this with you, together,” Biden said.

Ukraine has been powerless to prevent Russian troops from taking control of Crimea, which Russian President Vladimir Putin annexed on Tuesday. A day later, masked Russian-speaking troops moved into Ukraine’s naval headquarters in the Crimean city of Sevastopol, detaining the head of Ukraine’s navy and seizing the facility. They faced no resistance.

Andriy Parubiy, secretary of Ukraine’s National Security and Defense Council, said the government was drawing up plans to evacuate its outnumbered troops from Crimea back to the mainland and will seek U.N. support to turn the peninsula into a demilitarized zone.

He also said Ukraine will hold military maneuvers with the countries that signed the 1994 Budapest Memorandum. He didn’t elaborate.

The document was signed by the U.S., Britain and Russia to guarantee Ukraine’s territorial integrity when it surrendered its share of Soviet nuclear arsenals to Russia after the Soviet Union broke up in 1991. Ukraine has accused Russia of breaching the agreement by taking over the Crimean Peninsula.

In addition, Parubiy said Ukraine decided to leave the Moscow-dominated Commonwealth of Independent States, a loose alliance of 11 former Soviet nations. The last nation to leave the group was Georgia, which lost a brief war with neighboring Russia in 2008 and ended up losing two separatist territories.

In a warning to Moscow, Biden declared that the United States will respond to any aggression against its NATO allies, which include neighbors to Russia.

Standing side-by-side with two Baltic leaders in Vilnius, Lithuania, Biden said the U.S. was “absolutely committed” to defending its allies, adding that President Barack Obama plans to seek concrete commitments from NATO members to ensure the alliance can safeguard its collective security.

“Russia cannot escape the fact that the world is changing and rejecting outright their behavior,” Biden said after meeting in Vilnius with Lithuanian President Dalia Grybauskaite and Latvian President Andris Berzins.

The several hundred Russian-speaking troops who captured the base in Sevastopol met no resistance. Sevastopol is also the home port of Russia’s Black Sea Fleet, and tens of thousands of Russian-led troops are now patrolling Crimea.

The seizure of the base came a day after a confrontation between Ukrainian soldiers and pro-Russian militia left two dead.

The Russian-led troops, who arrived on the base after the storming, wore helmets, flak jackets and uniforms with no identifying insignia. By afternoon, they were in full control of the naval headquarters, a set of three-story white concrete buildings with blue trim.

Ukraine’s Defense Ministry said no one was injured in the raid, which it said was led by pro-Russian militiamen and Cossacks.

Ukraine’s defense minister and deputy prime minister had planned to travel to Crimea on Wednesday in what they called a bid to avert an escalation in hostilities — but the pro-Russian leader of Crimea warned they would be turned back.

“They are not welcome in Crimea,” Sergei Aksyonov was quoted as saying by the Interfax news agency. “They will not be allowed to enter Crimea. They will be sent back.”

On Tuesday, Putin signed a treaty to incorporate Crimea into Russia following a referendum Sunday in which residents of the Black Sea region overwhelmingly backed the move.