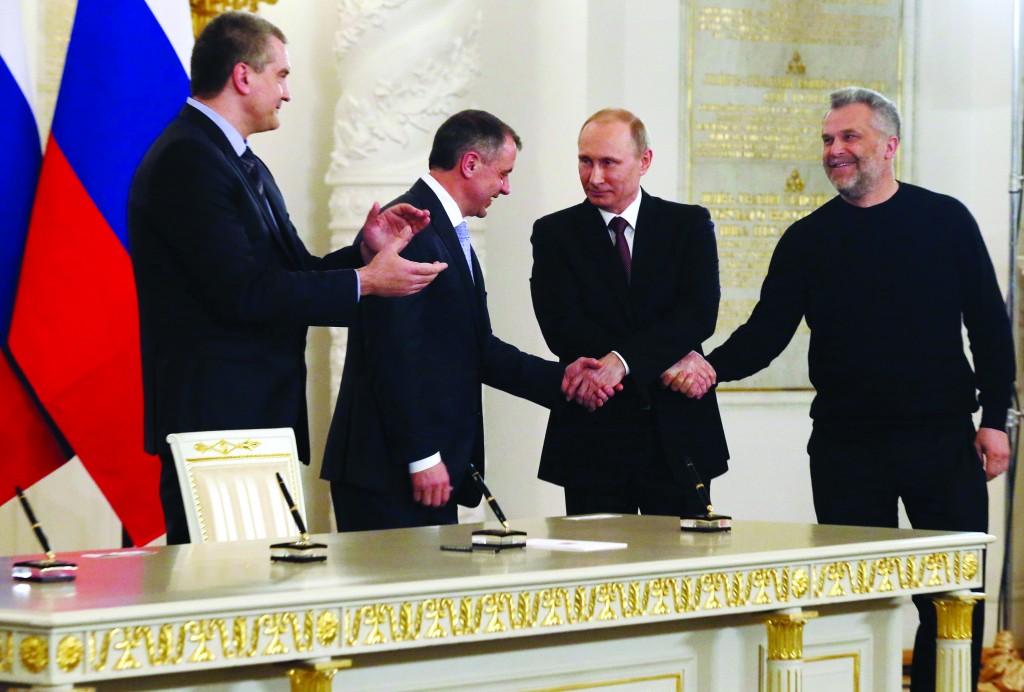 Defying Ukrainian protests and Western sanctions, Russian President Vladimir Putin signed a treaty in Moscow on Tuesday making Crimea part of Russia again, but said he did not plan to seize any other regions of Ukraine.

On the peninsula, a Ukrainian  serviceman was killed when a base still held by Kiev came under attack in the main town of Simferopol, the first death in Crimea from a military clash since Russia seized control three weeks ago.

Kiev said the attackers had been wearing Russian military uniforms, and it responded by authorizing its soldiers in Crimea to use weapons to protect their lives, reversing previous orders that they should avoid using arms against attack.

In a fiercely patriotic address to a joint session of parliament in the Kremlin, punctuated by standing ovations, cheers and tears, Putin said Crimea’s disputed referendum vote on Sunday, held under Russian military occupation, had shown the overwhelming will of the people to be reunited with Russia.

As the Russian national anthem played, Putin and Crimean leaders signed a treaty to make Ukraine’s region part of the Russian Federation, declaring: “In the hearts and minds of people, Crimea has always been and remains an inseparable part of Russia.” Parliament is expected to begin ratifying the treaty within days.

Russian forces took control of the Black Sea peninsula in late February following the toppling of Moscow-backed Ukrainian President Viktor Yanukovich by protests provoked by his decision to spurn a trade deal with the European Union last November and seek closer ties with Russia. People in Crimea voted overwhelmingly in last weekend’s referendum to join Russia.

Ukrainian and Russian troops have held back from violent confrontations, with Kiev anxious to avoid giving Moscow a reason for overrunning its bases in Crimea.

However, Ukraine’s pro-Western prime minister Arseny Yatseniuk denounced Tuesday’s death of the serviceman as a “war crime” and called for international talks to prevent an escalation of the conflict.

A defense ministry statement said the man had been shot while manning a tower, adding that the attackers in Russian uniforms were holding the base commander in a nearby building. A Russian Defense Ministry spokesman declined immediate comment.

Interfax Ukraine news agency, quoting Crimean police, reported that a member of the pro-Russian “self-defense forces” was also killed in the incident but this could not be confirmed.

In Kiev, the press service of Acting President Oleksander Turchinov announced new military orders. “In connection with the death of a Ukrainian serviceman … Ukrainian troops in Crimea have been allowed to use weapons to defend and protect the lives of Ukrainian servicemen.”

Vice President Joe Biden called Moscow’s action a “land grab” and on a visit to Poland stressed Washington’s commitment to defending the security of NATO allies on Russian borders.

“It is completely unacceptable for Russia to use force to change borders, on the basis of a sham referendum held at the barrel of a Russian gun,” British Prime Minister David Cameron said, threatening Putin with “more serious consequences.”

NATO Secretary-General Anders Fogh Rasmussen joined the condemnations. “Russia has disregarded all calls to step back into line with international law and continues down the dangerous path,” he said in a statement. “Crimea’s annexation is illegal and illegitimate and NATO allies will not recognize it.”

In his speech, the Russian leader lambasted Western nations for what he called hypocrisy, saying they had endorsed Kosovo’s right to self-determination and independence from Serbia but now denied Crimeans the same rights.

“You cannot call the same thing black today and white tomorrow,” Putin declared, saying that while he did not seek conflict with the West, Western partners had “crossed the line” over Ukraine.”

Putin tried to reassure Ukrainians that Moscow did not seek any further division of their country. Fears have been expressed in Kiev that Russia might move on the Russian-speaking eastern parts of Ukraine, where there has been tension between some Russian speakers and the new authorities.

Putin said Russian forces in Crimea had taken great care to avoid any bloodshed, contrasting it with NATO’s 1999 campaign to drive Serbian forces out of Kosovo. Reinforcements had remained within the treaty limit of 25,000 troops in the area, he said.

Setting out Moscow’s view of the events that led to the overthrow of Yanukovich last month, Putin said the “so-called authorities” in Kiev had stolen power in a coup, opening the way for extremists who would stop at nothing.

Making clear Russia’s concern at the possibility of the U.S.-led NATO military alliance expanding into Ukraine, he declared: “I do not want to be welcomed in Sevastopol (Crimean home of Russia’s Black Sea fleet) by NATO sailors.”

Moscow’s seizure of Crimea has caused the most serious East-West crisis since the end of the Cold War, and Putin showed no
sign of backing down despite the threat of tougher sanctions.

In Crimea, where his speech and the signing ceremony were broadcast live, his words were greeted with rapture by some.

“Putin’s done what our hearts were longing for,” said Natalia, a pensioner who sells snacks in a kiosk in Simferopol. “For me, for my family, there can be no bigger joy, for us this is sacred.”

Yatseniuk earlier tried to reassure Moscow on two of its main concerns, saying in a media address that Kiev was not seeking to join NATO and would disarm Ukrainian nationalist militias.

Foreign Minister Sergei Lavrov threatened retaliation. “The sanctions introduced by the United States and the European Union are unacceptable and will not remain without consequences,” the foreign ministry said in a statement about a telephone call Lavrov made to U.S. Secretary of State John Kerry.

The White House said leaders of the world’s leading industrial democracies would hold a Group of Seven meeting without Russia on the sidelines of a nuclear security summit in The Hague next week to consider further responses to the crisis.