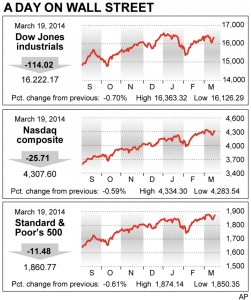 Higher interest rates are coming. And they are coming sooner than you think.

That’s the message investors took away from the Federal Reserve on Wednesday. In response, they sent stocks and gold prices lower and bond yields sharply higher.

The Fed voted to cut its monthly bond purchases from $65 billion to $55 billion, in line with what analysts were expecting. Despite severe winter weather in January and February, the Fed said economy had recovered enough for it to continue reducing the bond buys, which are aimed at keeping long-term interest rates low.

The Federal Reserve also said the vast majority of its policymakers believed it would be appropriate for the central bank to raise short-term interest rates starting in 2015. The Federal Funds rate, traditionally the Fed’s main tool for regulating the health of the economy, has been near zero since late 2008.

Investors have grown used to an easy-money policy from the Fed for more than five years now. Higher interest rates would mean the economy is improving, but it also raises the cost of borrowing money for everyone, from companies borrowing to expand their businesses to consumers looking at a mortgage. At the same time, if the Fed kept interest rates for too low for too long it could cause the U.S. economy to overheat and experience inflation.

Traders were also confused after newly appointed Fed Chair Janet Yellen implied that the Fed’s time frame for raising interest rates was closer to the first half of 2015, sooner than many had expected.

A timetable of six months was much sooner than investors had predicted. So whether or not Yellen meant the “six months” as a definitive timetable or a rough estimate based upon where the economy might be in a year, the market took Yellen at her word, strategists said. Stock and bond prices steepened in their decline after she made her comments.

“It creates a haze of uncertainty,” said Andres Garcia-Amaya, global market strategist with J.P. Morgan Funds. “As we get closer to 2015, we should expect more volatility like this.”

The reaction to Yellen’s remarks and the Fed’s announcements was far more noticeable in the bond market.

Financial stocks did better than the rest of the market. Citigroup rose 80 cents, or 1.7 percent, to $48.94 and Bank of America rose 25 cents, or 1.5 percent, to $17.44. Banks, in particular big commercial lenders like Citi, benefit from higher interest rates because they can charge more for loans and credit card balances.

This article appeared in print on page 8 of the March 20th, 2014 edition of Hamodia.