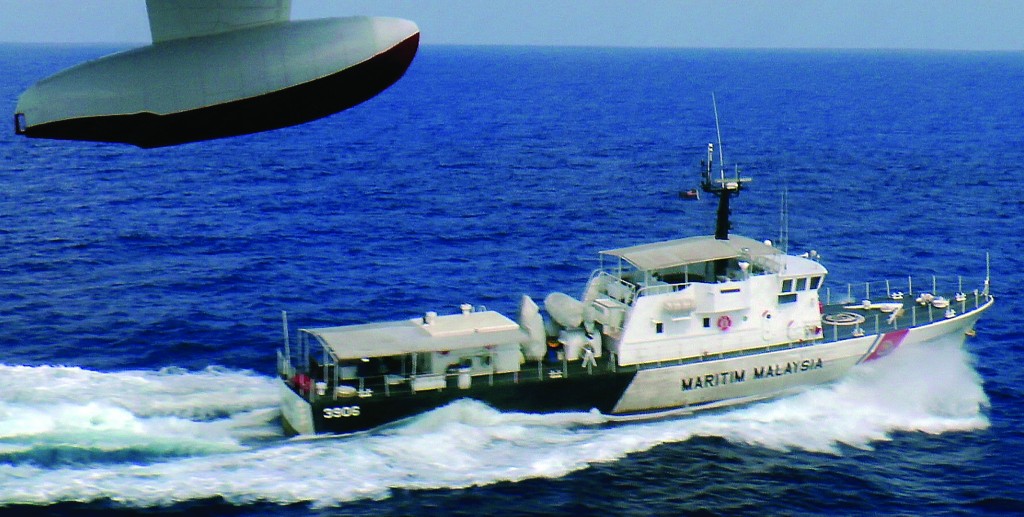 Vietnamese aircraft spotted what they suspected was one of the doors of a missing Boeing 777 on Sunday, while troubling questions emerged about how two passengers managed to board the ill-fated aircraft using stolen passports.

Interpol confirmed it knew about the stolen passports but said no authorities checked its vast databases on stolen documents before the Boeing jetliner departed Saturday from Kuala Lumpur en route to Beijing with 239 people on board.

Warning “only a handful of countries” routinely make such checks, Interpol secretary general Ronald Noble chided authorities for “waiting for a tragedy to put prudent security measures in place at borders and boarding gates.”

More than two days after Malaysia Airlines Flight MH370 went missing, the final minutes before its disappearance remained a mystery. The plane lost contact with ground controllers somewhere between Malaysia and Vietnam.

However, searchers in a low-flying plane spotted an object that appeared to be one of the plane’s doors, the state-run Thanh Nien newspaper said, citing the deputy chief of staff of Vietnam’s army, Lt. Gen. Vo Van Tuan.

Two ships from the maritime police were headed to the site about 60 miles (90 kilometers) south of Tho Chu island in the Gulf of Thailand, the same area where oil slicks were spotted Saturday.

“From this object, hopefully (we) will find the missing plane,” Tuan said.

The missing jetliner apparently fell from the sky at cruising altitude in fine weather, and the pilots were either unable or had no time to send a distress signal — unusual circumstances under which a modern jetliner operated by a professional airline would crash. 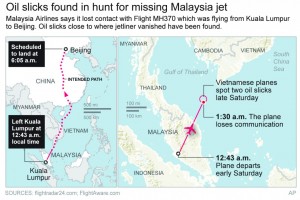 Authorities were checking on the identities of the two passengers who boarded the plane with stolen passports. On Saturday, the foreign ministries in Italy and Austria said the names of two citizens listed on the flight’s manifest matched the names on two passports reported stolen in Thailand.

“I can confirm that we have the visuals of these two people on CCTV,” Malaysian Transport Minister Hishammuddin Hussein said at a news conference late Sunday, adding that the footage was being examined. “We have intelligence agencies, both local and international, on board.”

The thefts of the two passports — one belonging to Austrian Christian Kozel and the other to Luigi Maraldi of Italy — were entered into Interpol’s database after they were stolen in Thailand in 2012 and last year, the police body said. But no authorities in Malaysia or elsewhere checked the passports against the database of 40 million stolen or lost travel documents before the Malaysian Airlines plane took off.

Troubling details also emerged Sunday about the itineraries of the two passengers traveling on the stolen passports.

A telephone operator on a China-based KLM hotline confirmed Sunday that passengers named Maraldi and Kozel had been booked on one-way tickets on the same KLM flight, flying from Beijing to Amsterdam on Saturday. Maraldi was to fly on to Copenhagen, Denmark, and Kozel to Frankfurt, Germany.

She said the pair booked the tickets through China Southern Airlines, but she had no information on where they bought them.

As holders of EU passports with onward flights to Europe, the passengers would not have needed visas for China.

Interpol has long sounded the alarm that growing international travel has underpinned a new market for identity theft: Bogus passports have lured illegal immigrants, terrorists, pretty much anyone looking to travel unnoticed. More than 1 billion times last year, travelers boarded planes without their passports being checked against Interpol’s database of 40 million stolen or lost travel documents, the police agency said.

Of the 227 passengers and 12 crew members on board, two-thirds were Chinese, while the rest were from elsewhere in Asia, Europe and North America, including three Americans.

Malaysia Airlines has a good safety record, as does the 777, which had not had a fatal crash in its 19-year history until an Asiana Airlines plane crashed last July in San Francisco, killing three passengers, all Chinese teenagers.