The Israeli navy seized a ship in the Red Sea on Wednesday that was carrying dozens of advanced Iranian-supplied rockets made in Syria and intended for Palestinian terrorists in the Gaza Strip.

The disclosure came as Israeli Prime Minister Binyamin Netanyahu was in the United States to press his case for tougher international action against Iran over its disputed nuclear program and support for Islamist terrorist groups.

State Department spokeswoman Jen Psaki disclosed that Washington had foreknowledge of the shipment.

“The White House directed the Department of Defense to monitor the vessel,” Psaki said, adding that the U.S. had prepared  to take “unilateral steps” to interdict it. But Israel volunteered to handle the matter itself.

The Panamanian-flagged cargo vessel Klos C was boarded in international waters 930 miles from the Israeli coast without resistance from its 17-strong crew in a “complex, covert operation,” IDF spokesman Lieutenant-Colonel Peter Lerner told reporters. The raid was the culmination of months of intelligence gathering. 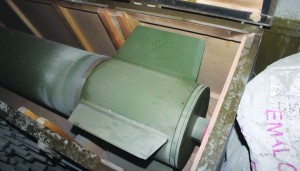 Lerner said dozens of M302 rockets were found aboard the Klos C, a weapon which could have struck deep into Israel from Gaza and would have significantly enhanced the firepower of Hamas and other armed factions.

“The M302 in its most advanced model can strike over 100 miles, and if they would have reached Gaza, ultimately that would have meant millions of Israelis under threat,” he said.

Hamas denied the charges as a “silly joke.”

There was no immediate comment from Iran or Syria.

Military footage showed the Israeli navy chief, Admiral Ram Rothberg, inspecting a rocket on the floor of a ship hold, with cement bags labeled “Made in Iran” in English next to it.
Lerner said the rockets were flown from Syria to Iran, from where they were shipped first to Iraq and then towards Sudan. Had they reached the African coast, they would have probably been smuggled overland through Egypt to Gaza, he said.

Netanyahu’s office said that the prime minister, who was in Los Angeles on Wednesday, had approved the ship seizure after consultations with his security chiefs.

“At the same time that it is talking to world powers, at the same time that Iran is smiling and saying all kinds of honeyed words, that same Iran is sending lethal weaponry to terrorist organizations and it is doing so in a complex web of covert, worldwide operations,” Netanyahu said from Los Angeles. 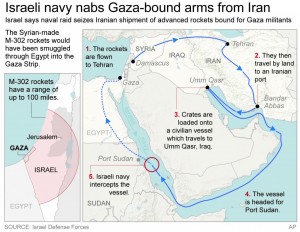 “We followed international law to the letter. The ship travelled under a Panamanian flag, the company was listed in Marshall Islands, the captain was Turkish and the crew was from different countries,” he told a conference in Tel Aviv.

Iran had orchestrated the shipment, Lerner said, describing the process as months in the making. The Klos C was being brought to the Israeli port of Eilat, where its contents would be more fully inspected and displayed to the public.

Lerner said there was no immediate indication the crew had known the nature of their cargo.

According to tracking data, the Klos C was previously at Bandar Abbas port in Iran in early February 2014 and prior to that in Port Said in January.