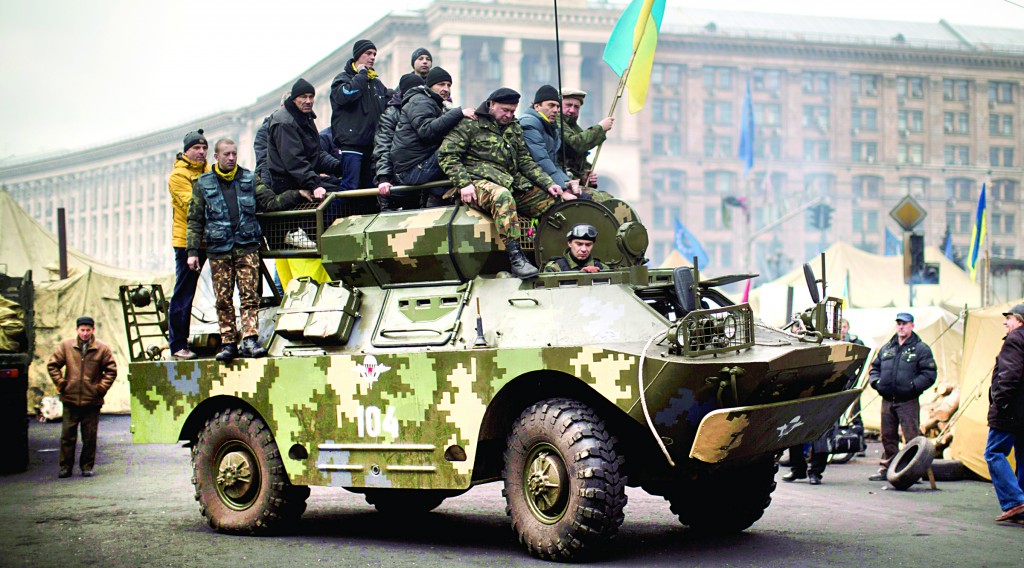 Moscow granted shelter to Ukraine’s fugitive president, Viktor Yanukovych, state media said. He was said to be holed up in a luxury government retreat and to have scheduled a news conference for Friday near the Ukrainian border.

As gunmen wearing unmarked camouflage uniforms erected a sign reading “Crimea is Russia” in the provincial capital, Ukraine’s interim prime minister declared the Black Sea territory “has been and will be a part of Ukraine.”

Yanukovych, whose abandonment of closer ties to Europe in favor of a bailout loan from Russia set off three months of protests, finally fled by helicopter last week as his allies deserted him. The humiliating exit was a severe blow to Russian President Vladimir Putin, who has long dreamed of pulling Ukraine closer into Moscow’s orbit.

For Ukraine’s neighbors, the specter of Ukraine breaking up evoked memories of centuries of bloody conflict. 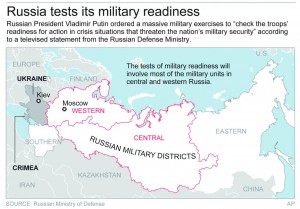 Russia has pledged to respect Ukraine’s territorial integrity. But the dispatch of Russian fighter jets Thursday to patrol borders and drills by some 150,000 Russian troops — almost the entirety of its force in the western part of the country — signaled strong determination not to lose Ukraine to the West.

Thursday’s dramatic developments posed an immediate challenge to Ukraine’s new authorities as they named an interim government for the country, whose population is divided in loyalties between Russia and the West. Crimea, which was seized by Russian forces in the 18th century under Catherine the Great, was once the crown jewel in Russian and then Soviet empires.

It only became part of Ukraine in 1954 when Soviet leader Nikita Khrushchev transferred jurisdiction from Russia — a move that was a mere formality until the 1991 Soviet collapse meant Crimea landed in an independent Ukraine.

Arseniy Yatsenyuk, named Thursday in a boisterous parliamentary session, now faces the difficult task of restoring stability in a country that is not only deeply divided politically but on the verge of financial collapse. The 39-year-old served as economy minister, foreign minister and parliamentary speaker before Yanukovych took office in 2010, and is widely viewed as a technocratic reformer who enjoys the support of the U.S.