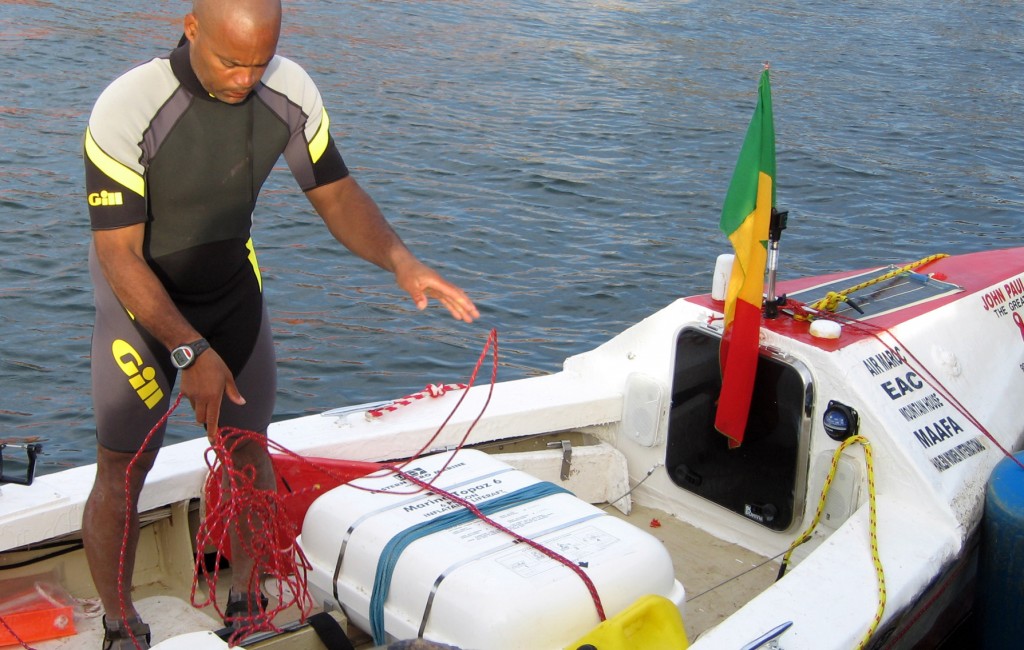 A tenacious New Yorker who has been trying for nearly a decade to row solo across the Atlantic Ocean, but has been plagued by bad luck, shipwreck and maybe a little early naiveté, embarked Wednesday on his fourth attempt at the epic journey.

Victor Mooney, 48, of Brooklyn, left for a roughly 3,000-mile row to the British Virgin Islands. After landing in April or May, he plans to resupply his tiny boat and row another nearly 1,800-plus miles back to New York. Along the way, he’ll live on freeze-dried military rations, a variety of herbs and green tea and whatever fish he can yank from the sea.

This impossibly long, lonely path is one Mooney has set out on before. But so far, his tale reads like the mythical land-obsessed monarch who stubbornly builds his castle on swampland only to have it repeatedly sink or burn.

Mooney’s first trans-Atlantic attempt, in 2006, ended when a 24-foot, wooden rowboat he’d built himself sank off the West African coast just hours after he’d pushed off from Senegal.

Three years later, he tried again with an oceangoing rowboat boat built by a professional. Its drinking water systems failed after two weeks at sea and he had to be rescued.

In 2011, Mooney set off from the Cape Verde Islands in an even more sophisticated boat. But that vessel, dubbed the Never Give Up, had apparently been damaged in transit and sprang a leak shortly after he put to sea. He escaped in a life raft, then spent two weeks drifting 250 miles in the ocean.

“It was quite humbling,” Mooney said of the disaster. “The first two days I cried like a baby because I didn’t want to die.”

He consoled himself by reading a waterlogged Bible, especially Psalm 91, which promises that angels will protect the faithful. Finally, he was picked up by a cargo ship headed for Brazil.

Before that trip, Mooney had vowed to his wife that it would be his last, whether he made it or not. But he was barely on dry land in Brazil before he was plotting another attempt.

This time, Mooney says he has taken his preparation to another level. His Brazilian-built oceangoing rowboat, he says, is his best yet. He spent months getting familiar with the craft by training around Long Island. He has better communications equipment aboard. More care was taken packing and shipping the boat. He’s taken it out for extensive trials in the Canary Islands to make sure everything is working.

This time, he’s also getting support throughout the trip from an oceanographer, Jenifer Clark, and meteorologist, Dane Clark, a husband-and-wife team in Maryland who will make sure Mooney stays on a course that takes advantage of the Atlantic’s ever-changing currents and weather. Rowers who get caught on the wrong side of an eddy can wind up moving backward, they said.

Mooney’s boat, a capsule-like affair, is designed to offer protection even in high seas. Like his other attempts, this one is dedicated to a brother who died.

The New Yorker is one of several people to attempt an east-to-west crossing of the Atlantic this winter. Successful crossings happen annually and high-seas rescues are also common.

Mooney said he is committed to finally making it. That stubborn king lost his first three castles to the swamp, as other kings ridiculed him.

“But the fourth one stayed up!” he told his son. “And that’s what you’re gonna get, lad. The strongest castle in these islands.”