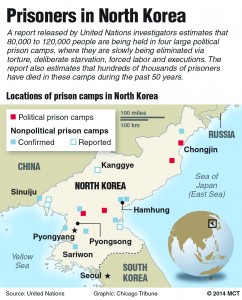 “We now need strong international leadership to follow up on the grave findings of the Commission of Inquiry. I therefore call on the international community, in line with the report’s recommendations, to use all the mechanisms at its disposal to ensure accountability, including referral to the International Criminal Court,” Pillay said in a statement issued in Geneva.

The independent U.N. investigators, led by Michael Kirby, recommended that the world body refer the situation in North Korea to the Hague-based ICC or set up a special tribunal.

Earlier, China rejected what it said was “unreasonable criticism” of Beijing in the U.N. report on human rights abuses in North Korea, but didn’t comment on  whether it would veto any proceedings in the Security Council.

The U.N. Human Rights Council is due to hold a debate on the report on March 17 and vote on its recommendations by March 28.

This article appeared in print on page 3 of the February 19th, 2014 edition of Hamodia.