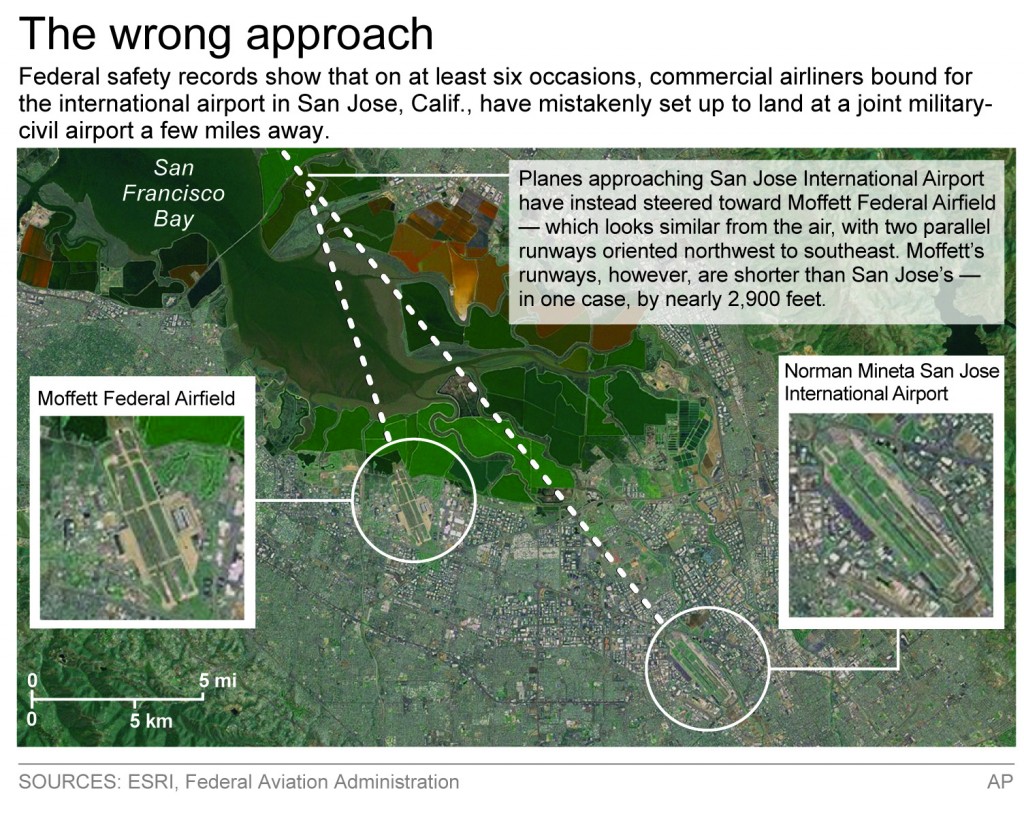 At a time when a cellphone can guide you to your driveway, commercial pilots attempt to land at the wrong airport more often than most passengers realize or government officials admit, according to an Associated Press search of government safety data and news reports since the early 1990s.

On at least 150 flights, including a Southwest Airlines jet last month in Missouri and a jumbo cargo plane last fall in Kansas, U.S. commercial passenger and cargo planes have either landed at the wrong airport or started to land and realized their mistake in time.

A particular trouble spot is San Jose, Calif. The list of landing mistakes includes six reports of pilots preparing to land at Moffett Field, a joint civilian-military airport, when they meant to go to Mineta San Jose International Airport, about 10 miles to the southeast. The airports are south of San Francisco in California’s Silicon Valley.

“This event occurs several times every winter in bad weather when we work on Runway 12,” a San Jose airport tower controller said in a November 2012 report describing how an airliner headed for Moffett after being cleared to land at San Jose. The plane was waved off in time.

In nearly all the incidents, the pilots were cleared by controllers to fly based on what they could see rather than relying on automation. Many incidents occur at night, with pilots reporting they were attracted by the runway lights of the first airport they saw during descent. Some pilots said they disregarded navigation equipment that showed their planes slightly off course because the information didn’t match what they were seeing out their windows — a runway straight ahead.

“You’ve got these runway lights, and you are looking at them, and they’re saying: ‘Come to me, come to me. I will let you land.’ They’re like the sirens of the ocean,” said Michael Barr, a former Air Force pilot who teaches aviation safety at the University of Southern California.

Using NASA’s Aviation Safety Reporting System, along with news accounts and reports sent to other federal agencies, the AP tallied 35 landings and 115 approaches or aborted landing attempts at wrong airports by commercial passenger and cargo planes over more than two decades.

The tally doesn’t include every event. Many aren’t disclosed to the media, and reports to the NASA database are voluntary. The accounts that are available paint a picture of repeated close calls, especially in parts of the country where airports are situated close together with runways similarly angled, including Nashville and Smyrna in Tennessee, Tucson and Davis-Monthan Air Force Base in Arizona, and several airports in South Florida.