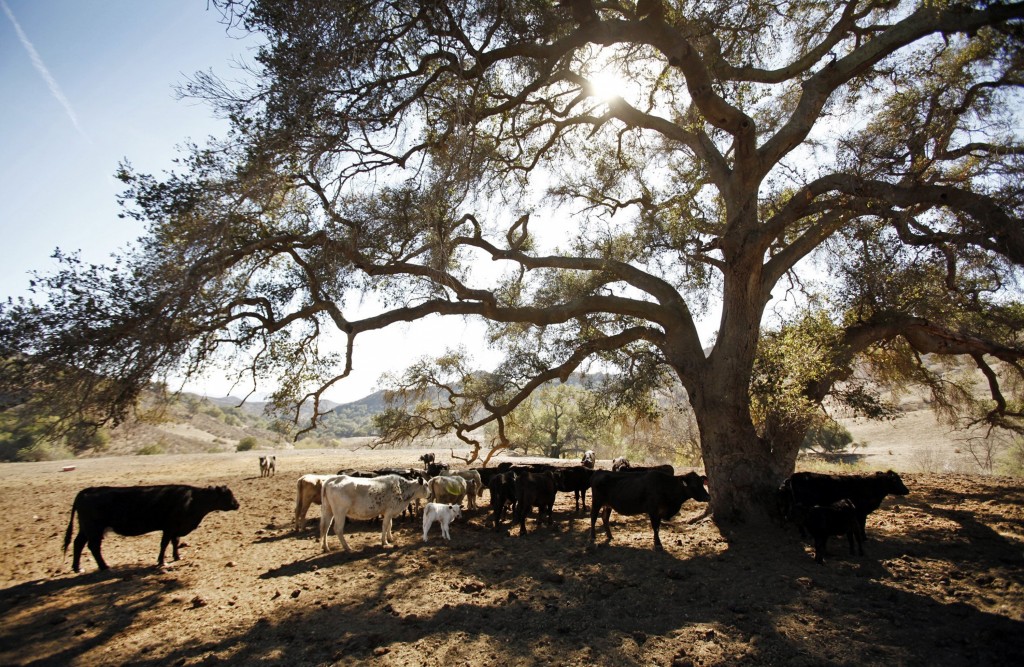 Beneath unyielding blue skies, on a recent afternoon, Ryan Indart knelt down to examine what was left of one of his sheep pastures.

Land that should have been lush with native grasses this time of year, has been reduced to powdery dirt, splotched with a few withered strands of filaree and foxtail. And where there’s no vegetation, there are no sheep.

A fourth-generation rancher, Indart has already sent 10 percent of his 4,000 ewes – which he normally would want to keep – to the slaughterhouse, because he can’t afford the hay to feed them. If the drought keeps up, his hungry ewes won’t reproduce as they should to make his investment pay off. Yearlings will struggle to gain weight because their mothers won’t produce enough milk. Indart may have to cull more of them if the clouds don’t open up.

“These animals need to be on green pasture,” he said. “Without rain, we can’t do that. We can’t survive, just feeding them hay. It’s critical.”

As California’s punishing drought drags on, ranchers are among the first to feel the pain.

Cattlemen and sheep farmers need winter rain to grow range grass. Without it, they have to depend on expensive feed, which delivers only a fraction of the nourishment provided by natural pastures.

Their struggle is a bellwether for California’s $45 billion agriculture sector, a force responsible for filling the grocery aisles and pantries of the world. The Golden State produces nearly half of all U.S.-grown fruits, nuts and vegetables and is the nation’s leading dairy and wine producer.

But dwindling water supplies are rousing anxieties in rural communities across the state. Ranchers have begun liquidating herds. Growers are considering tearing out thirsty tree crops, such as nut orchards and citrus groves. And tens of thousands of additional acres of prime California soil could go unplanted if farmers don’t get enough water to irrigate them.

“It’s a borderline catastrophe,” said Ryan Jacobsen, chief executive of the Fresno County Farm Bureau, which represents the largest agricultural county in the nation. “The impact is going to be very traumatic.”

Jacobsen estimates that 200,000 to 300,000 acres of farmland in Fresno County’s thirsty west side could be left fallow, because federal water allocations are expected to dry up. That will leave growers even more dependent on groundwater wells, whose quality is rapidly deteriorating from overuse and a lack of rainfall to replenish them.

Growers are now irrigating crops such as wheat and almonds, in a season when they usually rely on rainwater – further stressing what little water remains. As a result, at least one irrigation district, the Orland-Artois Water District in northern Glenn County, said that it ran out of water near the end of last month. The district said it began buying water this week.

Desperate ranchers are ordering hay from wherever they can get it, including neighboring states. Prices have shot up to about $270 a ton, from $200, in just a few months. Busy agricultural arteries, including Interstate 5 and California 99, are now dotted with heavy trucks hauling bales of hay.

The crisis in the nation’s food basket could ultimately cause prices of meat, milk and vegetables to surge, and leave thousands of farmhands out of work. The drought in the West, coupled with bitter cold in much of the rest of the country, has helped shrink the nation’s cattle population to a 61-year low. Wholesale prices for choice-graded beef hit an all-time high of $240.05 per hundredweight Jan. 22, according to the U.S. Department of Agriculture.

“The agricultural industry is definitely hit the hardest by drought,” said Doug Parker, director of the California Institute for Water Resources. “In California, agriculture uses 80 percent of the water in the state. It’s a major input for their business and hits their finances and employment directly.”

A drought in 2009 wiped out nearly 10,000 jobs, left 270,000 acres fallow and cost $340 million in lost revenue, according to a University of California-Davis study of the San Joaquin Valley.

That contributed to a 9 percent drop in year-on-year sales of state agricultural products to $34.8 billion. As a testament to the agriculture sector’s resilience, that figure was still good enough to be California’s third-highest recorded sales total at the time.

That’s unsettling to longtime ranchers like Rob Frost, whose ranch is tucked into dry, cinnamon-colored hills in Santa Paula, 12 miles east of Ventura. He’s been selling off his cattle for a year, because he can’t afford enough feed to overcome the loss in rangeland grass. In that time, he’s shrunk his herd more than 40 percent, to 200 animals.

The arid conditions have stressed his remaining animals. Some grew sick, drinking the area’s spring water, which has grown murky from lack of rain. When some cows died, Ford had to switch to more expensive hay, and reroute spring water to a deeper pond, to allow the sediment to sink.

“We should have six inches of grass and cleaner water,” Frost, a 71-year-old cowboy with a baritone drawl, said, while surveying a canyon reduced to craggy moonscape.