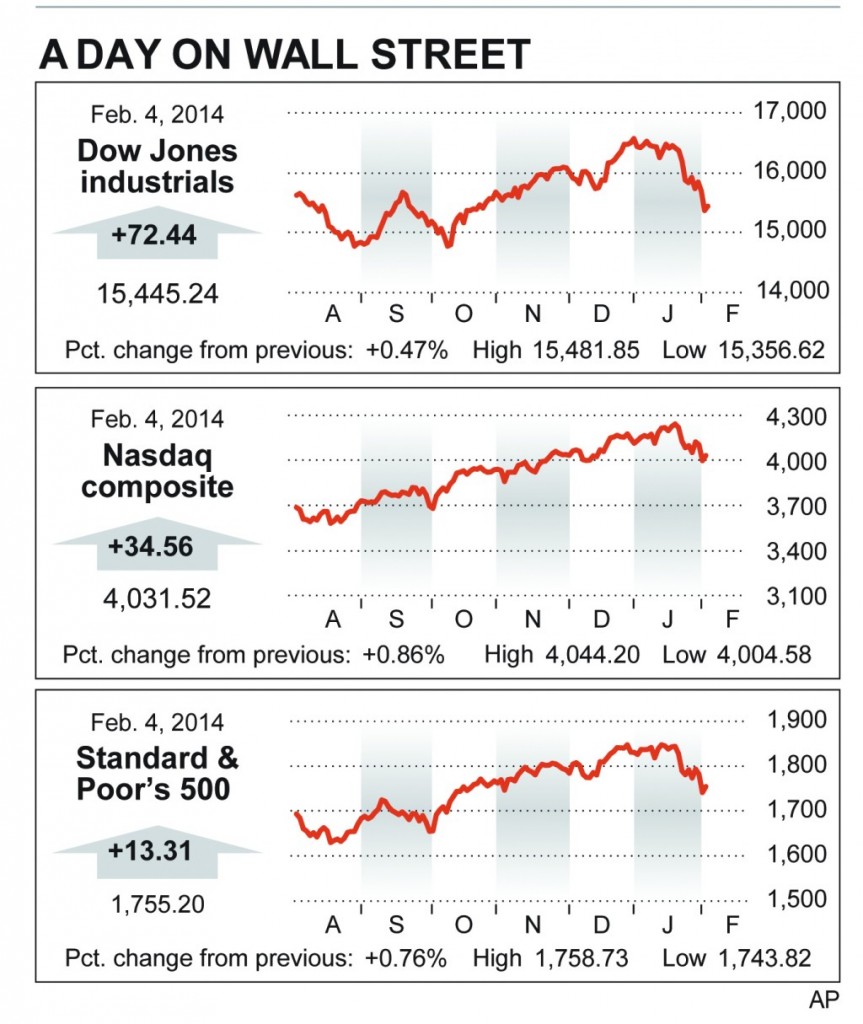 Investors went hunting for bargains a day after U.S. stocks racked up the biggest losses in more than seven months.

The buying helped lift major stock indexes out of the red on Tuesday. Prices of U.S. government bonds fell.

The mini-rebound seemed fragile at times, with the market giving up some of its earlier gains by late afternoon.

Markets were coming off a 326-point drop in the Dow Jones industrial average on Monday, and the blue-chip index’s worst January performance in five years prompted by disappointing news about U.S. manufacturing.

Among the biggest gainers on the day were fashion retailer Michael Kors Holdings, water technology provider Xylem and the owner of Pizza Hut, KFC and Taco Bell restaurant chains.

Trading was relatively light for much of the day, picking up by late afternoon. But most of the active stocks were in the green.

Investors are trying to gauge the strength of the U.S. economic recovery. They got some positive news on Tuesday, when the Commerce Department reported that orders to U.S. factories fell 1.5percent in December, as aircraft orders plunged. That’s the biggest drop since July, but it was less than anticipated.

On Monday, the Institute for Supply Management said its index of manufacturing activity fell to 51.3 in January, the lowest reading since May. That unnerved investors already worried about signs of a slowdown in the global economy.

Whether Tuesday’s market uptick gains momentum or gives way to another sell-off may depend on what the government’s latest jobs report says on Friday.

Employers added just 74,000 jobs in December, the fewest in three years and far below the average of 214,000 added in the previous four months. The consensus forecast for January calls for hiring to rebound to 170,000, according to FactSet.

Between now and then, Wall Street will parse company earnings for more clues about the economy’s health.

Among companies due to report on Wednesday: Time Warner, Merck, Yelp, Walt Disney and Allstate.

Investors rewarded some companies who reported earnings on Tuesday. Michael Kors jumped $13.24, or 17.3 percent, to $89.91 after the fashion retailer reported stronger results.

Yum! Brands jumped $5.90, or 9 percent, to $72.06 after the owner of KFC reported better-than-expected earnings late Monday. It also indicated it remains confident about its earnings growth forecast for the year.

Water technology provider Xylem made a splash, rising $3.47, or 11 percent, to $36.27, after it reported better-than-anticipated results for its fourth quarter.

Microsoft drew a muted response from investors after the tech giant named Satya Nadella as its new CEO. Founder Bill Gates is also stepping down as chairman and will become a technology adviser to the company. The news lowered shares 13 cents, or 0.4 percent, to $36.35.

Utilities were the laggard, with Dominion Resources leading the decline. Shares slid $1.27, or 2 percent, to $65.85.

The yield on the 10-year Treasury note climbed to 2.63 percent from 2.58 percent on Monday as investors sold bonds.