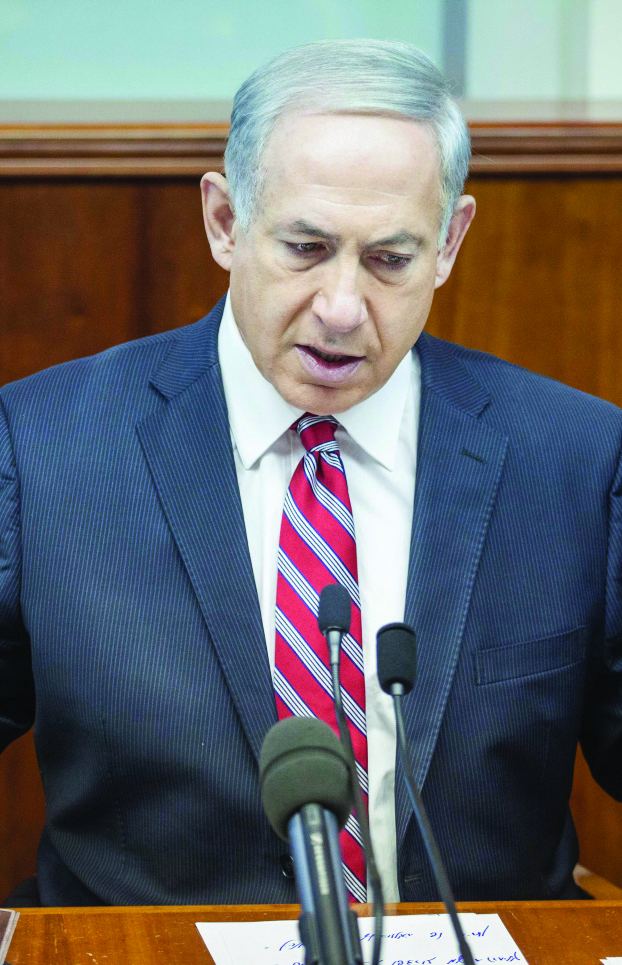 Israeli Prime Minister Binyamin Netanyahu defied international pressure to make concessions to the Palestinians, declaring at a press conference in Davos that he will not uproot any Israeli citizens from Yehuda and Shomron.

The statement appeared to run counter to the widespre

ad assumption that Israel is prepared to withdraw from parts of the region while keeping the main Jewish population blocs.

Although Netanyahu made the comment in response to a question about his commitment to maintaining an Israeli presence in the Jordan Valley, his wording was strikingly broad:

“I do not intend to evacuate any communities or uproot a single Israeli,” he said.

On Sunday, “a well-placed official in the Prime Minister’s Office” told The Times of Israel, that the prime minister was indeed referring to the entirety of Yehuda and Shomron. He will insist that residents be given the free choice of remaining in place and living under Palestinian rule, or relocating to areas under Israeli sovereign rule, the official said.

While the official said Netanyahu’s position on the issue was “longstanding,” Friday’s press conference marked the first time since talks resumed in August that the prime minister had said it in so many words in public.

It is worth noting, however, that Netanyahu was speaking in Hebrew during a briefing for Israeli journalists, which was not republished in the official version by the Prime Minister’s Office.

The press conference followed a meeting with Secretary of State John Kerry, concerning which Netanyahu insisted that Kerry is not trying to push the two sides into signing a framework agreement but merely suggesting ideas.

Netanyahu tried to allay mounting concern over an economic boycott against Israel because of its construction policy in Yehudah and Shomron, saying, “I actually see great interest on the part of international companies to invest in Israel,” he said.

Meanwhile, on Sunday, senior PLO official Yasser Abed Rabbo said that Israeli negotiators are discussing a series of limited withdrawals contingent on progress by the Palestinian Authority in maintaining security.

In an interview with the London-based al-Hayat daily, Abed Rabbo said the concessions would include land in the Jordan Valley.

“There are talks on long-term security arrangements and standards [that would be] subject to so-called improved performance on security by the Palestinians, overseen by Israel,” he said. “The Americans say they will be present and involved in evaluating this performance so that Israel will evacuate some areas, especially from the Jordan Valley.”

Speaking more generally, Abed Rabbo said “the plan proposes Palestinian recognition of Israel as a Jewish state, the establishment of the Palestinian capital in a part of eastern Yerushalayim and solving the refugee problem in accordance with former U.S. President Bill Clinton’s vision.”

Rabbo noted, however that Netanyahu “is refusing to open the file on Yerushalayim, and the Palestinians continue to reject Israel’s demand that it be formally recognized as the Jewish state.

Clinton proposed Israel allow a limited number of Palestinian refugees in, estimated at up to 100,000 people. Israeli negotiators have at times spoken of much smaller numbers.

Chief Israeli negotiator Tzipi Livni, who also attended the Davos gathering, told Israeli media at the end of last week that a new poll showing overwhelming skepticism about the peace talks will not deter her from seeking an agreement.

The poll found 87 percent of Israelis think that a peace agreement with the Palestinians will not result from the current talks.

“A leader’s role is to shape reality and not be influenced by polls. When the framework agreement for continuation of talks is put on the table the public will support it,” Livni predicted.

The Shiluv-Millward-Brown also found 63% of Israelis oppose eastern Yerushalayim concessions to the Palestinians under a peace accord; 77% want Palestinians to recognize Israel as the Jewish state as a condition for peace.

Livni was asked to comment on accusations from the right that her warning that a boycott against Israel would deepen if a peace settlement was not reached offers legitimacy to the cause of the boycotters and shows she identifies with the movement. Livni denied the accusation, saying that the claim is analogous to accusing a security official who warns of a military threat that the official identifies with the threat.