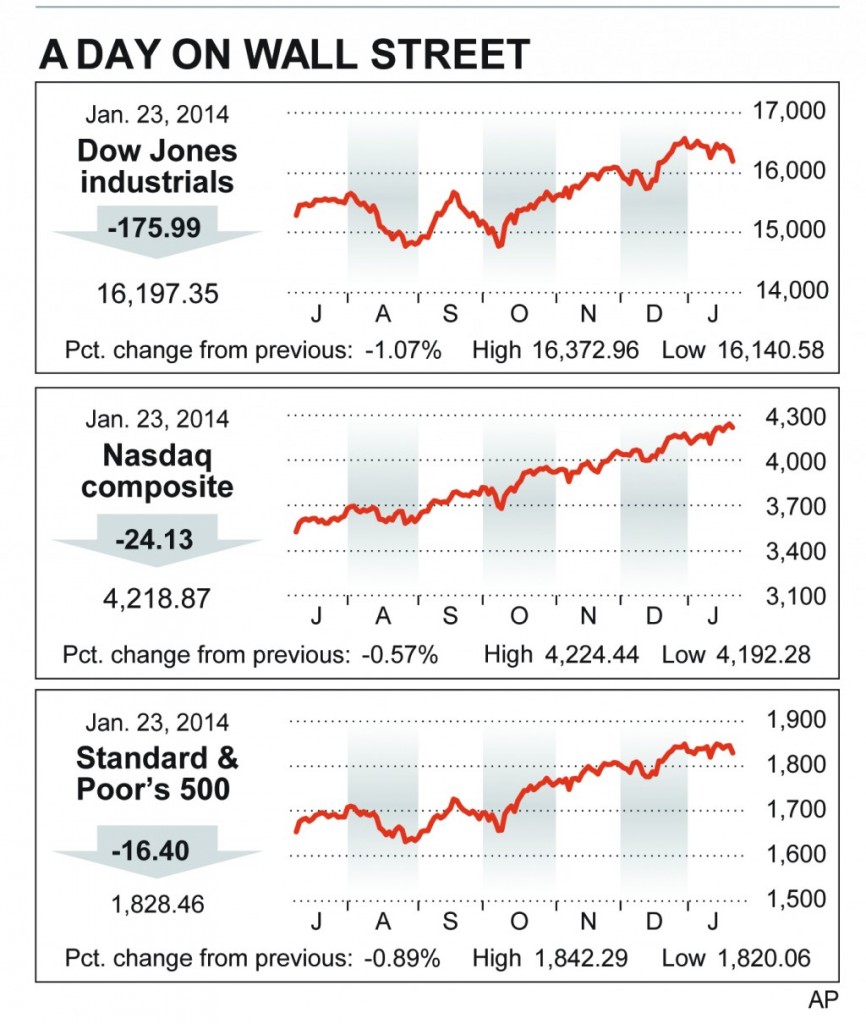 U.S. stocks fell broadly Thursday after a report from China added to growing signs that the world’s second-largest economy is slowing. The selling spared few companies, even those reporting solid earnings.

“It’s pretty ugly,” said Randy Frederick, a managing director of active trading and derivatives at Charles Schwab. “When you’ve got a market that’s near record highs … people are looking for any excuse to take profits.”

In the Standard and Poor’s 500 index, nine of 10 companies dropped.

Stocks fell from the start of trading after an HSBC survey of Chinese manufacturing fell to the lowest point since July and suggested that the country’s factory sector was shrinking. Earlier this week, China reported its slowest annual economic growth since 1999.

Fearful investors poured money into U.S. government debt securities, pushing the yield on the 10-year Treasury note down to 2.78 percent from 2.86 percent late Wednesday. That was the lowest since Nov. 29. Yields fall on bonds when their prices rise.

Worries about China also hammered emerging market currencies. The Argentine peso fell hard, and has now lost 16 percent of its value in two days, the fastest drop since the country’s economic collapse in 2002. The Turkish lira fell 1.3 percent and reached a record low against the dollar.

Several U.S. companies fell after reporting their latest quarterly results, including KeyCorp, Johnson Controls and Jacobs Engineering. All three either met or exceeded analyst expectations for earnings, but were each down at least 3 percent as investors sold the broad market.

So far this reporting season, about a fifth of the companies in the S&P 500 have reported fourth-quarter earnings, with about 65 percent of them beating analyst estimates — a solid performance, said Christine Short, associate director at S&P Capital IQ. She said that is about the historical average.

But investors seem more focused on the global economy, and on projections from companies for the coming year.

“The guidance has been very guarded and analysts are not lifting their numbers for 2014,” said David Bianco, head U.S. stock strategist at Deutsche Bank.

United Continental fell 75 cents, or 1.5 percent, to $48.43 after its prediction for revenue growth this quarter disappointed investors.

The pullback comes after a stellar run for stocks last year. The Dow rose nearly 27 percent and the S&P, nearly 30 percent.

“The market at these levels is a bit skittish,” said James Dunigan, chief investment strategist at PNC Wealth Management. He added that “any kink in the growth story … is going to give investors pause.”

Some companies bucked the selling tide. Netflix surged $54.99, or 17 percent, to $388.72, the biggest gain in the S&P 500. After trading ended Wednesday, the company reported fourth-quarter earnings had climbed six-fold and that it had added 2.3 million subscribers during the period.