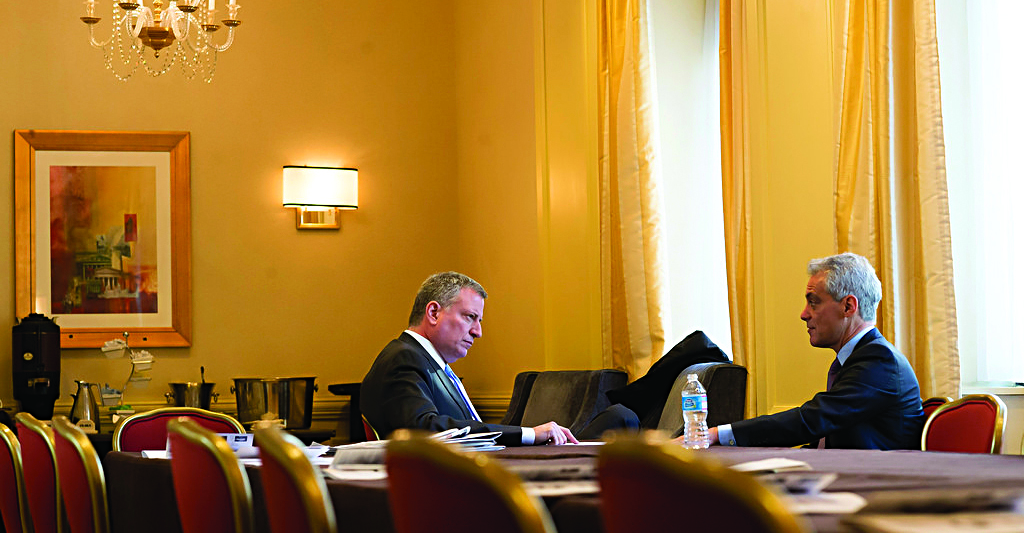 In the nation’s capital after an address to his fellow mayors, de Blasio insisted that his proposed tax hike is the only way to guarantee funding for his signature proposal and that an alternative payment plan proposed by Gov. Andrew Cuomo would not suffice.

His stance came hours after the publication of an interview with Cuomo, the state’s leading Democrat, in which he said the mayor’s interest in raising taxes on the rich had more to do with political symbolism than collecting revenue.

The public statements, which have been accompanied by scores of behind-the-scenes phone calls to lawmakers from de Blasio, Cuomo and their staff members, will set up perhaps the most dramatic moment yet when de Blasio journeys to the state capital of Albany on Monday to testify about his plan.

“This is the very early days of de Blasio’s mayoralty and he is going to need Albany’s help on lots of things in the years to come,” said David Birdsell, dean of the School of Public Affairs at Baruch College. “He needs to consider his relationship with Albany, and particularly Cuomo. If he doesn’t have the governor in his camp, he has scant prospects of getting other stuff done.”

De Blasio, elected in November, has been unwaveringly on message. More than a year before the election, he proposed a small increase in the tax rates on New York City residents who make $500,000 or more annually, which would raise $530 million a year. Of that, $340 million would be used to fund universal prekindergarten in the city,  while the rest would pay for expanded afterschool programs.

He has refused to consider any alternative and has been working to line up support for the tax hike, which needs the approval of lawmakers and the governor.

Cuomo, who is running for re-election this fall, had long signaled his support for universal prekindergarten but made a campaign pledge not to raise taxes. In this week’s state budget presentation, he offered instead to fund it for the entire state with existing money in the budget.

He questioned de Blasio’s motives for the tax hike in an interview with The New York Times editorial board published Thursday.

“He’s saying part of what he ran on is income inequality, and part of the answer to income inequality is taxing rich people,” the governor said. “That’s what he’s saying, and that’s a political position — I understand that. I’m saying something else, which is: When it comes to pre-K, we will pay for pre-K.”

“Why do you need a tax for a service we’re going to fully fund?” asked Cuomo, suggesting he was offering de Blasio a blank check for state funds to pay for the program. “Whatever he needs, as fast as he can phase in, we’ll fund it.”

Cuomo also suggested in the interview that de Blasio would push for the tax hike, a favorite in liberal circles in a city where Democrats outnumber Republicans 6 to 1, even if he relented and allowed the state to pay for prekindergarten.

De Blasio has never publicly stated that he would redirect the tax hike for another need. His team has stressed that the governor’s original plan — which would offer $100 million for the entire state in its first year, then increase in subsequent years — would not meet the city’s need or be a guaranteed, dedicated revenue stream.

“We’ve seen the history of Albany. Albany has often changed its mind and had different political dynamics affect it,” de Blasio said in Washington. “We need consistency and reliability.”

De Blasio said he will release a detailed report on his plan next week. He appears to have the votes he needs to get the plan through the Democratic-controlled state Assembly but not the Senate.

While their political ambitions are coming to a head over the pre-K program, the two have known each other for decades. Both made sure to emphasize that.

“I don’t have a better political friend than Bill de Blasio,” Cuomo told the Times.

And during a press conference following the mayors’ conference, de Blasio defended Cuomo against Republican critics, who demand the governor apologize for saying that “extreme conservatives” have no place in New York.

Cuomo’s aide said in a statement that the comments were taken out of context. De Blasio said he agreed with him.