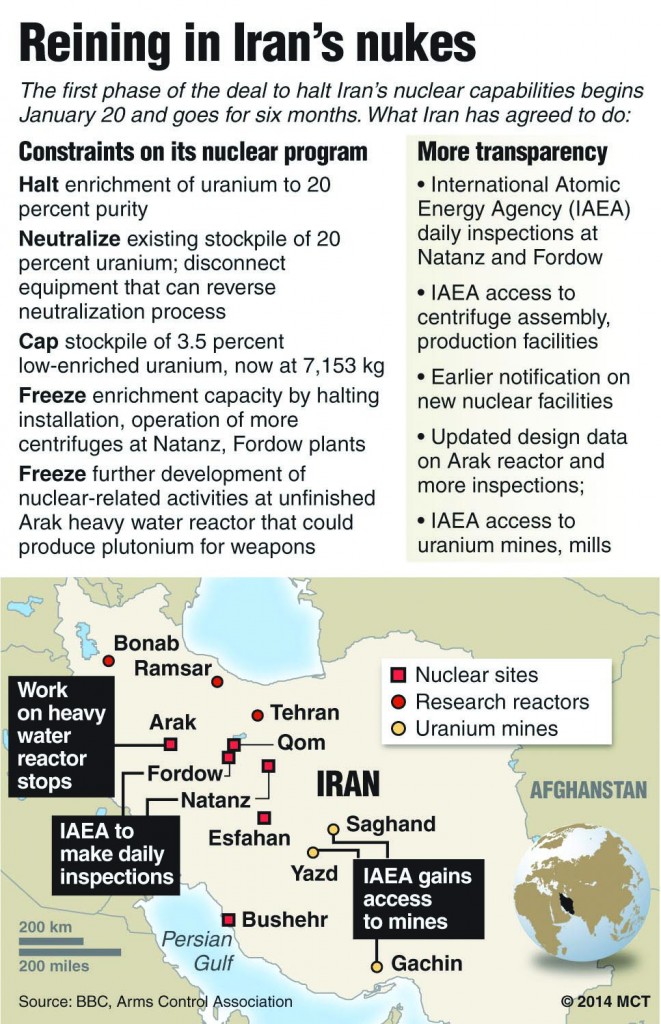 Iran has halted its most sensitive nuclear operations under a preliminary deal with world powers, winning some relief from economic sanctions on Monday in a ground-breaking exchange that could ease a threat of war.

The United States and European Union both suspended some trade and other restrictions against the OPEC oil producer after the United Nations’ nuclear watchdog confirmed that Iran had fulfilled its side of an agreement made on November 24.

The announcements will allow six months of negotiation on a definitive accord that the West hopes can end fears of Tehran developing nuclear weapons and Iran wants to end sanctions that are crippling its economy.

Iranian officials hailed a warming of ties that will also see their new president make a pitch to international business leaders at Davos later this week: “The iceberg of sanctions against Iran is melting,” the head of Iran’s Atomic Energy Organization, Ali Akbar Salehi, told Iranian state media.

Iran should be able to recover $4.2 billion in oil revenues frozen in foreign accounts over the six months of the interim deal, as well as resume trade in petrochemicals and gold and other precious metals. But EU and U.S. officials stressed that other sanctions will still be enforced during the six months of talks and that reaching a final accord will be difficult.

The interim accord was the culmination of years of on-off diplomacy between Iran and six powers — the United States, Russia, China, Britain, France and Germany. It marks the first time in a decade that Tehran has limited nuclear operations that it says are aimed mainly at generating electricity and the first time the West has eased its economic pressure on Iran.

“This is an important first step,” said EU foreign policy chief Catherine Ashton. “But more work will be needed to fully address the international community’s concerns regarding the exclusively peaceful nature of the Iranian nuclear program.”

Ashton, who coordinates diplomatic contacts with Iran on behalf of the six world powers, said she expected talks on the final settlement to start in February.

U.S. State Department spokeswoman Jen Psaki said those negotiations would be “even more complex” and added: “We go into it clear-eyed about the difficulties ahead.”

A White House spokesman said the “aggressive enforcement” of the remaining sanctions would continue.

A senior U.S. official said: “This temporary relief will not fix the Iranian economy. It will not come close.

“Iran is not and will not be open for business until it reaches a comprehensive agreement.”

President Barack Obama’s administration faces opposition to the easing of sanctions from Israel and from some members of Congress who have threatened to tighten some restrictions.

Israeli Prime Minister Benjamin Netanyahu told parliament the temporary pact fell short of preventing Iran from working on nuclear arms. He said: “In the final deal, the international community must get the Iranian nuclear train off the track. Iran must not have the capability to produce atomic bombs.”