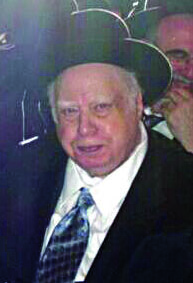 The world of Talmudic scholarship lost a visionary and brilliant contributor Wednesday with the petirah in Lakewood of Rabbi Tovia Preschel, z”l, a well-known Talmudic scholar and journalist whose prolific writings and activism made him a legend. He was 91.

Rabbi Preschel was a contributing writer for many Jewish and Talmudic encyclopedias, including both the Hebrew and English editions of the Encyclopedia Talmudis, founded by Harav Shlomo Yosef Zevin, zt”l.

A survivor of the Holocaust, from his native Austria through a Kindertransport visa to Britain, he was an activist on behalf of Jewish and Israeli causes throughout his life.

Rabbi Preschel was born in 1922 to Reb Moshe and Pearl Liba (Shapira) Preschel. Moshe Preschel, a successful businessman, was a son of Harav Yochanan Preschel, Rav of Sniatyen, Galicia, who authored various sefarim and was a contributor to a variety of Torah journals.

Towards the end of 1938, following the Anschluss, when Austria was taken over by Germany, Tovia was taken to London on one of the Kindertransports organized by Rabbi Solomon Schoenfeld, z”l. Tovia’s farewell to his parents in Vienna was the last time he was to see his mother. She was later deported from France to Auschwitz where she perished, Hy”d.

In London, Tovia studied for many years at Yeshivah Etz Chaim. His main teachers were the Rosh Yeshivah, Harav Elya Lopian, zt”l, one of the great mussar leaders of his generation; Harav Shlomo Nachman Greenspan, zt”l, a well-known rabbinical scholar and author; and Harav Arye Ze’ev Gurwitz, zt”l, one of Harav Elya Lopian’s sons-in-law, who was to later serve as Rosh Yeshivah in Gateshead.

During his stay in London, Tovia became active in Menachem Begin’s Irgun Zvai Leumi, later serving as a volunteer in the IDF during the 1948 War of Independence.

In Yerushalayim, Reb Tovia served for a period as an editor at Mossad HaRav Kook. He also contributed to Encyclopedia Talmudit, authoring the entry, “Talmud,” in Encyclopedia Americana. He contributed many articles on Jewish and Rabbinical scholars to the Encyclopedia Judaica and Encyclopedia Ivrit, as well as to various collections of biographies such as Eleh Ezkerah edited and published by Dr. Isaac Lewin on behalf of Agudas Yisrael.

Writing in Hebrew, Yiddish and English, he wrote for various Jewish newspapers including the Israeli dailies Herut, HaTzofeh and Hamodia, as well as the Jewish Press in the United States.

Rabbi Preschel also wrote for Torah periodicals such as Sinai, HaDarom, published by the Rabbinical Council of America; HaPardes of Agudas Harabbonim of America; Or Hamizrach under the auspices of the U.S. Mizrachi; and various other Torah collections.

About ten years ago, Reb Tovia moved to Lakewood to live with his son. He was niftar on Wednesday morning, with the levayah taking place in the afternoon at the 7th Street Chapel. Kevurah is scheduled for Thursday on Har Hazeisim.

He is survived by his wife Chana Rochel (Flam) Preschel and children: Dr. Yochanan Preschel, a psychiatrist in New York; Dr. Shmuel Aaron Preschel, an internist in Lakewood; Rabbi Chaggai Preschel, a marbitz Torah in Yerushalayim and Moscow; and Dr. Pearl Herzog, who teaches Jewish history at Kean University.

Shivah will be observed by all the Preschel children in Yerushalayim at 86 Rechov Fattal in Ramat Shlomo until Motzoei Shabbos. (The phone number is 02-571-2047.) The family will then sit in Lakewood until Wednesday morning at 119 Leonard St.