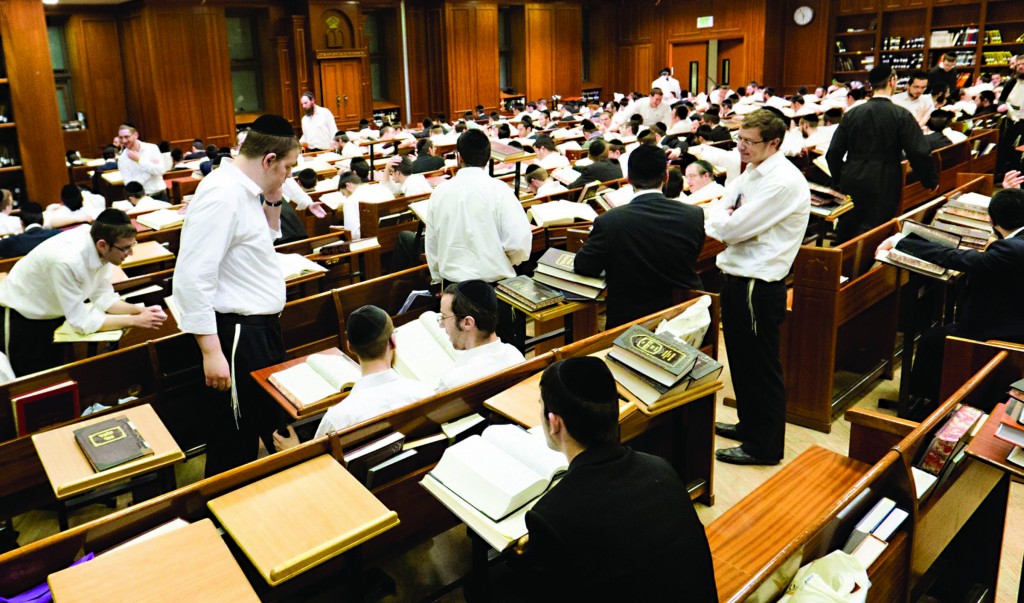 Feverish preparations are now underway on both sides of the ocean for a historic trip to America by Moetzes Gedolei HaTorah of Agudas Yisrael in Eretz Yisrael.

In what is being described as an unprecedented decision, the members of the Moetzes have  decided to travel to the United States to arouse Torah-true Jewry in light of the draft law that threatens yeshivah students and young married men in kollel.

The decision was taken at a meeting of the Moetzes, which convened at the headquarters of World Agudas Yisrael in Yerushalayim on Monday, to address the draft law.

A final date for the trip has not yet been finalized, although it is expected to take place within the coming weeks, possibly as early as next week, or the following one.

Sources told Hamodia that askanim are now searching for a suitable indoor venue to hosts the thousands that are expected to attend a mass gathering led by the Gedolim.

The news — first reported in the Tuesday edition of Hamodia — has already caused great excitement and anticipation within the various kehillos in the United States.

The members of the Moetzes also signed a joint kol korei along with the members of the Moetzes Gedolei HaTorah of Degel HaTorah in light of the intention to uproot Torah scholars from the beis medrash. They once again appealed to the government not to allow this to happen, and to prevent the tremendous bitul Torah, which brings about the opposite of Divine chessed and rachamim, which Klal Yisrael so desperately needs at this time.

The Moetzes meeting, the kol korei and the decision to travel abroad are all an effort to rally Torah-true Jewry in the Diaspora to stand beside their chareidibrothers in Eretz Yisrael, who are experiencing an assault on religious issues in general, and the draft law that threatens yeshivah students and kollel avreichim in particular.

The joint kol korei begins with a description of the draft decree that threatens yeshivah bachurim and kollel avreichim “whose toil in Torah is their trade,” the intention of which is to “uproot them, chalilah, from the beis medrash.” The kol korei declares that “there is no right to uproot them from their place, and thus, to violate our right of existence in our Holy Land.”

The Gedolim note that there is “certainly no right to draft them and coerce them into the army framework, in which their very presence is a spiritual danger, Hashem Yerachem, and which is the opposite of the pure chinuch they received and their toil to live lives of emunah.” They emphasize that “We are carrying out the mission of those before us, to protect the lomdei Torah, and we vigorously object to the plan to force one who is Toraso umnaso to leave the beis medrash.”

The kol korei concludes with a call to the yeshivah students and kollel avreichim themselves, to whom Gedolei Yisrael lovingly say, “Be mekadesh Shem Shamayim… Stand strong and with strength and devotion, and do not submit even one bit to those who seek to separate you from the source of your life.” They express their hope and offer a brachah that the law will be suspended and that “Torah magna umatzlah — protects and saves, and that Hashem will not abandon His Nation and His Land.”

The hearts of G-d-fearing Jews are woeful and sad in light of the intentions to decree a draft law on the bachurim of the holy yeshivos and the avreichei kollel, whose toil in Torah is their craft, Torasam umnasam, and to uproot them from the beis medrash, chalilah. The place of lomdei Torah is in the tent of Torah, and there is no right to uproot them from their places, and thus to violate the essence of our right to exist in our Holy Land. Certainly, there is no right to draft them and coerce upon them the framework of the army, in which their very presence poses a great spiritual danger, Hashem should have mercy, and it is the opposite of their pure chinuch and toil to live lives of emunah.

We are carrying out the mission of those before us to guard the lomdei Torah, and we vehemently protest the plan to force someone who is Toraso umnaso to leave the benches of the beis medrash, and to integrate into frameworks that are intended to change the character of the yerei’im and chareidim l’dvar Hashem, while persecuting them with financial or criminal sanctions, so that they should not stay to learn Torah — and to cause, chalilah, that Torah should be stopped in Am Yisrael.

Woe unto us that a small part of Am Yisrael has come to this low level that we have not seen in previous generations,   where Jews persecute Jews in the Holy Land for their desire to learn Torah and to devote themselves to their Torah learning; and seek to do this to them through a decree of drafting them to the army — something that, if it will be realized as they wish, will cause a terrible chillul Hashem, and will cast a stain and kitrug, a denunciation, on Am Yisrael, that your destroyers and demolishers will come from you.

We are repeating our call to the heads of the government: Al nah tarei’u, do not do bad, and do not allow the persecutors of religion to realize their intentions.

And to the talmidim of the holy yeshivos and to the avreichei kollel for whom Torah is their craft, Torasam umnasam, we call to you with love: Sanctify the Name of Hashem, fortunate are you for being caught for divrei Torah. Stand strong and firm and be on your guard, and do not submit even one iota to those who seek to separate you from your source of life. Netzach Yisrael lo  yeshaker, and in the merit of your Torah and the tefillah of the public that accompanies you, may you merit redemption and deliverance and much Heavenly Mercy.

We are sure that the decree can yet be canceled, and that Torah magna umatzla, Torah protects and saves — and Hashem will not abandon His Nation and won’t leave His Land. And we daven to the Creator that He grant us deliverance and mercy, and may we merit to see the revelation of the Kavod of Hashem and the glory of Torah and Yirah be raised, and the arrival of Moshiach speedily in our day, Amen.