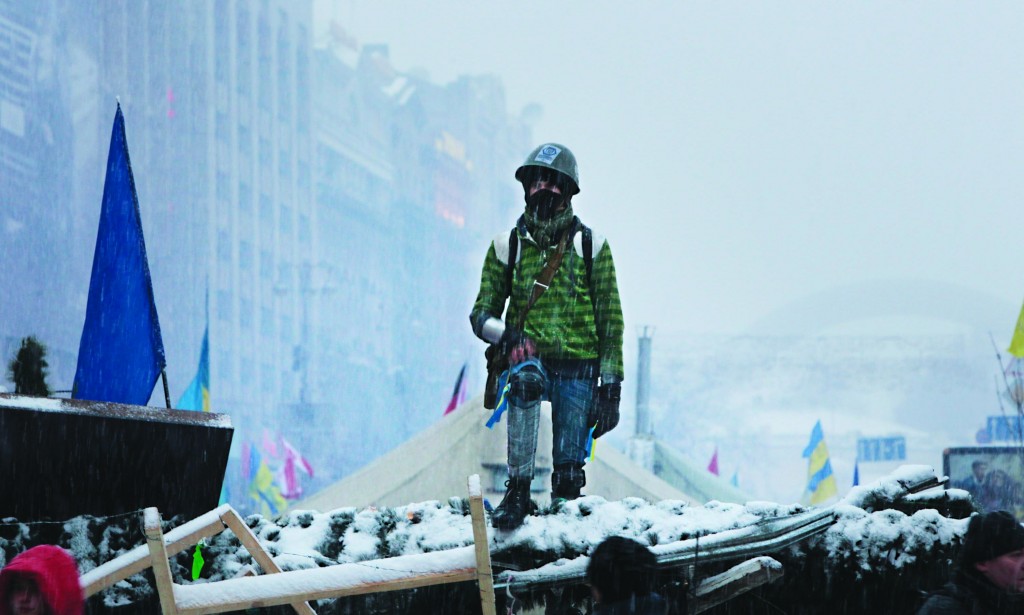 Heavily armed riot troops broke into the offices of a top Ukrainian opposition party in Kiev and seized its servers Monday, the party said, as anti-government protests crippled the capital for yet another day.

Tensions also rose as a double cordon of helmeted, shield-holding police deployed in the street near Kiev’s city administration building, which demonstrators had occupied and turned into a makeshift command post and dormitory.

The moves came a day after hundreds of thousands of demonstrators crammed into Kiev, the biggest in three weeks of protests that started when Ukraine’s president backed away from signing a long-awaited pact to deepen ties with the 28-nation European Union.

Protesters are angered not only by the thwarting of their desire to become closer to the West and spin out of Russia’s orbit, but also by police violence against the demonstrators. Club-swinging police have twice broken up protest rallies.

Ostap Semerak, a member of the Fatherland Party, told The Associated Press that troops broke into the party’s offices on Monday evening, some climbing in through its windows.

“They are storming us. The images are insane,” he said by telephone.

The troops left after confiscating some computer equipment, he said. An Associated Press reporter later saw broken glass and smashed computers in the offices.

Ukraine’s political standoff has been aggravated by its rapidly deteriorating finances. The economy has been in recession for more than a year, and the government is in desperate need of foreign funding to avoid a default. As talks stalled with the International Monetary Fund, Yanukovych has sought a bailout loan from Russia.

This former Soviet republic of 46 million people is sharply divided over the prospects of drawing closer to its powerful neighbor, Russia. Yanukovych’s stronghold is dominated by Russian speakers who want closer ties to Russia, in contrast to Kiev’s students and residents in the West who see better EU ties as the way forward.

Opinion polls, however, show that the EU is more popular among Ukrainians than Russia.

As tensions mounted, Yanukovych announced on his website that he would meet with Ukraine’s three former presidents to discuss the situation: Leonid Kravchuk, Leonid Kuchma, Viktor Yushchenko. But at the same time, prosecutors called in several opposition leaders for questioning.

Protesters on Monday vandalized another Lenin statue in the southern town of Kotovsk.

“Only the legs are left standing,” town spokeswoman Yelena Khaustova told the AP.