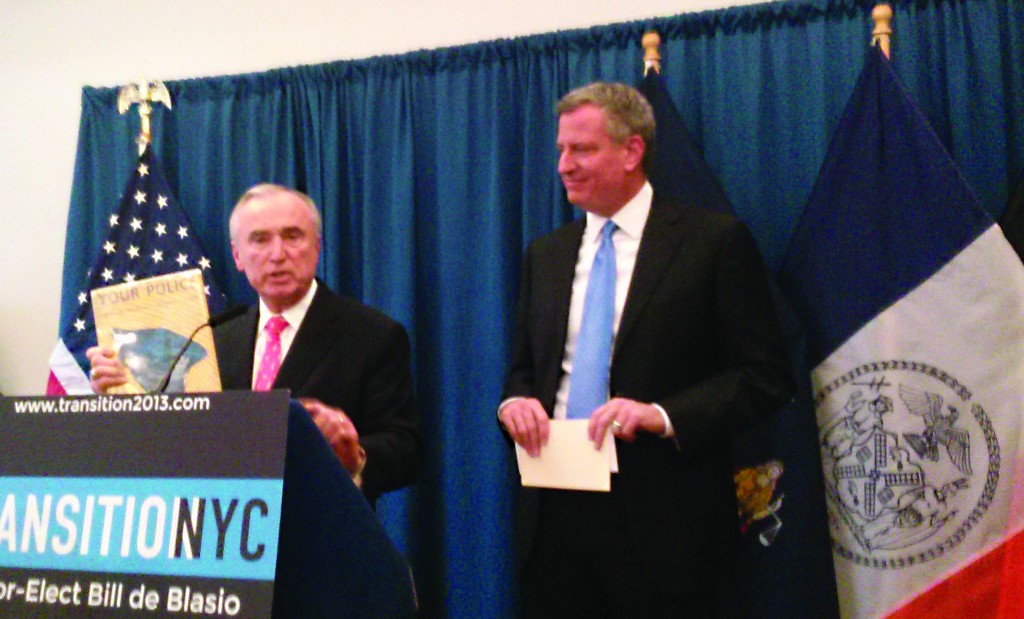 William Bratton, whose tenure as New York City police commissioner in the 1990s was marked by a steep decline in crime and clashes with Mayor Rudolph Giuliani, was chosen Thursday to lead the nation’s largest police force again, with mayor-elect Bill de Blasio reaching back to what he called a “proven crime-fighter” to ease concerns that his criticism of the police will compromise safety.

Elected officials and Jewish activists lauded the choice as one that keeps a steady hand on a crucial department.

“Mr. Bratton’s previous tenure as NYPD commissioner, as well as his years as Los Angeles’s top cop, were marked by significant declines in crime rates,” said Rabbi Chaim Dovid Zwiebel, Agudath Israel’s executive vice president. “He is experienced and smart, and has an excellent track record of working closely with the Jewish community.”

That track record, the Agudath Israel leader noted, gives the community a sense of comfort in a climate where Jewish New Yorkers appear to be increasingly targeted for attack by African-American and Hispanic teens in the “knockout game,” in which victims are sucker-punched in the head and knocked to the ground.

Rabbi Zwiebel added a condemnation of remarks made by Laurie Cumbo, the new councilmember-elect from Crown Heights, who explicitly linked the knockout attacks to African-American resentment of Jews.

“Such remarks,” the Agudah leader said, “which almost appear to justify violent assault against Jewish people, underscore the urgent need for the NYPD to exercise special vigilance to ensure that Jewish New Yorkers can walk the streets safely without fear of being targeted by ‘resentful’ hoodlums. Mayor-elect de Blasio’s choice of a proven crime-fighter and a proven friend of the Jewish community to head up the NYPD is an important step in providing such vigilance.”

“Those who were concerned about safety under the new mayoral administration should not have been,” Assemblyman Dov Hikind (D-Brooklyn) said in a statement. “Bill de Blasio has proven that with this appointment, and I enthusiastically applaud him.”

Councilman David Greenfield praised Bratton while drawing attention to a surge in crime targeting the Jewish community over the past few months.

“During a time when our community is witnessing ongoing acts of hatred in the form of ‘knockout’ attacks,” Greenfield, a Brooklyn Democrat, said, “it is especially reassuring that mayor-elect de Blasio has selected a commissioner who has a strong history of working well with the Jewish community.”

De Blasio chose to announce the appointment in front of the Red Hook Justice Community Center, a community court that has turned to alternative penalties to bring down recidivism rates among youths. It is a model that is looked at across the country, and one that the mayor-elect wants to replicate across the city.

Bratton is being named to lead the NYPD as it tries to maintain a historic drop in crime and an extensive counterterrorism program, even as its tactics have come under increased scrutiny.

Bratton, who has also headed the Boston and Los Angeles police departments, will succeed Raymond Kelly, the NYPD’s longest-serving commissioner. He is arguably the most important administration appointment for de Blasio, a Democrat who takes office Jan. 1.

“Together, we are going to preserve and deepen the historic gains we’ve made in public safety — gains Bill Bratton helped make possible,” de Blasio said in a statement. “We will do it by rejecting the false choice between keeping New Yorkers safe and protecting their civil rights. This is an administration that will do both.”

Bratton said his first duty will be “to bring police and community together. … It must be done fairly, compassionately and consistently.”

“De Blasio’s priorities are my priorities,” he said. “This department will not rest on its laurels. We are going to continue making history as the safest big city in America.”

Bratton, known for his outsized personality and fondness for the limelight, was police commissioner under Giuliani, a Republican, from 1994 to 1996. He emphasized the broken-windows theory of police work — that criminals who commit small crimes such as vandalism also commit more serious crimes.

Bratton helped spearhead the use of CompStat, a data-driven system of tracking crimes that allows police to better allocate their resources to high-crime areas. The real-time system is still used today.

Crime immediately plummeted under Bratton, who also benefited from an influx of new police officers. The year before Bratton took office, there were 1,946 murders citywide; by contrast, in 1996 there were 983, the first time it had dipped under 1,000 since 1968.

But Bratton frequently fought with Giuliani over who deserved the lion’s share of the credit. He resigned after two years.

Bratton, who had headed the Boston Police Department and the formerly independent New York City Transit Police before running the NYPD, was tapped to head another big-city police force in 2002. He spent seven years atop the Los Angeles Police Department and is credited with cleaning up the scandal-plagued department’s image. Crime dropped every year he was in office.

He has been working at private security firms since 2009.

But the mayor-elect has stressed he will try to continue the city’s record public-safety gains while improving police–community relations, which he believes have been strained by the police tactic known as stop-question-and-frisk.

The tactic allows police to stop anyone believed to be acting suspiciously, specifically in high-crime neighborhoods. While it has been proven to drive down crime to historic lows, some progressive and minority groups say it unfairly targets black and Latino men. Last year, there were 414 murders in the city, a record low, and this year is on pace to be lower still.

Bratton, a Boston native, has said he supports the proper use of the tactic. Police stops surged 49 percent during his time in Los Angeles. That reputation has caused some to question de Blasio’s choice.

The Muslim Advocates, a national legal advocacy organization that challenged the NYPD’s monitoring of Muslim neighborhoods, released a statement that they were “seriously concerned” about Bratton’s “troubling record of supporting the types of practices that have caused so much concern among New Yorkers.”

A federal judge ruled over the summer that the NYPD sometimes carried out its stops unconstitutionally by unfairly targeting minorities. Her ruling is on hold pending an appeal by the city. The appeal won’t be heard until after de Blasio takes office, and he has said he’d drop it.

Kelly, who served as commissioner for two years under former mayor David Dinkins and then 12 years under outgoing Mayor Michael Bloomberg, has been praised as one of the most effective commissioners in the NYPD’s history.