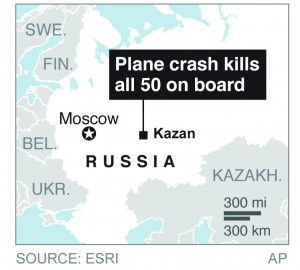 A Russian passenger plane crashed in gusty weather Sunday evening while attempting to land at the airport in Kazan in central Russia, killing all 50 people on board, authorities said.

The Boeing 737, with 44 passengers and six crew members aboard, was arriving from Moscow when it crashed into the airport tarmac, caught fire and broke apart, according to Sergei Izvolsky, a spokesman for Rosaviatsia, a federal air transportation agency.

The head of the Tatarstan department of the Federal Security Service, or FSB, Alexander Antonov, was also on board, RIA Novosti reported,

“Now a commission is being created to investigate all the circumstances and reasons of the catastrophe,” Izvolsky said to Rossiya-24, a news network. “It is too early now to speak about the reasons. As soon as we discover the flight recorders we will be able to say what caused the catastrophe.”

Izvolsky confirmed that there were no survivors.

Yelena Volosyuk, a senior meteorologist with the weather forecasting company Fobos, said that there were strong and sudden wind gusts in Kazan around the time of the crash.

“The weather [at the airport] was close to extreme,” said Ruben Esayan, a prominent Russian test pilot, “which compelled the crew to attempt landing twice or three times. I am under the impression that there could be some technical fault on board which resulted in a rough landing.”

Esayan, speaking to Rossiya-24, also noted that the Boeing 737 is the most popular passenger plane in Russia and one of the most reliable.

The Interfax news agency quoted unidentified law enforcement sources as saying that the plane, which had been in service for 23 years, made an emergency landing in Kazan a year ago because of depressurization.

This article appeared in print on page 3 of the November 18th, 2013 edition of Hamodia.