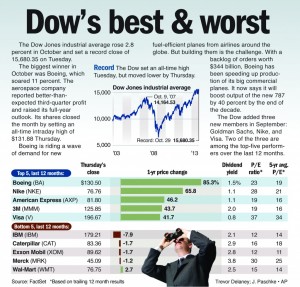 The stock market started November on a strong note as investors reacted to an expansion in U.S. manufacturing last month.

The improvement came during what could have been a difficult month for the U.S. economy, with a partial government shutdown that lasted 16 days and a narrowly averted default on the U.S. government’s debt, which could have rattled financial markets.

“With what happened in the last two months, it’s amazing how strong this market has been,” said Bob Doll, chief equity strategist at Nuveen Asset Management.

The Institute for Supply Management reported that its manufacturing index increased to 56.4, the highest level since April 2011. That was better than the 55.1 figure economists were expecting, according to financial data provider FactSet.

Energy stocks lagged the market after Chevron reported that its third-quarter income fell 6 percent, missing analysts’ estimates, due to weakness in the company’s oil refining business. Chevron fell $1.95, or 1.6 percent, to $118.01.

The positive start to this month’s trading comes after a strong October for the stock market. The S&P 500 closed at a record high seven times during the month, most recently on Tuesday. It ended October with a gain of 4.5 percent.

However, some investors have expressed skepticism that stocks can keep up this rapid pace heading into the last two months of the year.

The S&P 500 is up 23 percent so far this year, while the average annual return on the S&P 500 is around 8 percent. Stocks are also starting to look expensive by some measures. Investors are paying more than $16 for every $1 of earnings in the S&P 500, the highest that ratio has been since February 2011.

“I don’t think this market is cheap by any means,” said Brad McMillan, chief investment officer for Commonwealth Financial. “We’ve been urging caution for some time now.”

On Friday morning, the Nasdaq’s options market was halted due to a technical glitch. Regular stock trading was not affected.

• The Container Store more than doubled on its first day of trading on the New York Stock Exchange. The company raised $225 million in its initial public offering, pricing 12.5 million shares at $18 each. The stock soared $18.20 to $36.20.

This article appeared in print on page 12 of the November 4th, 2013 edition of Hamodia.