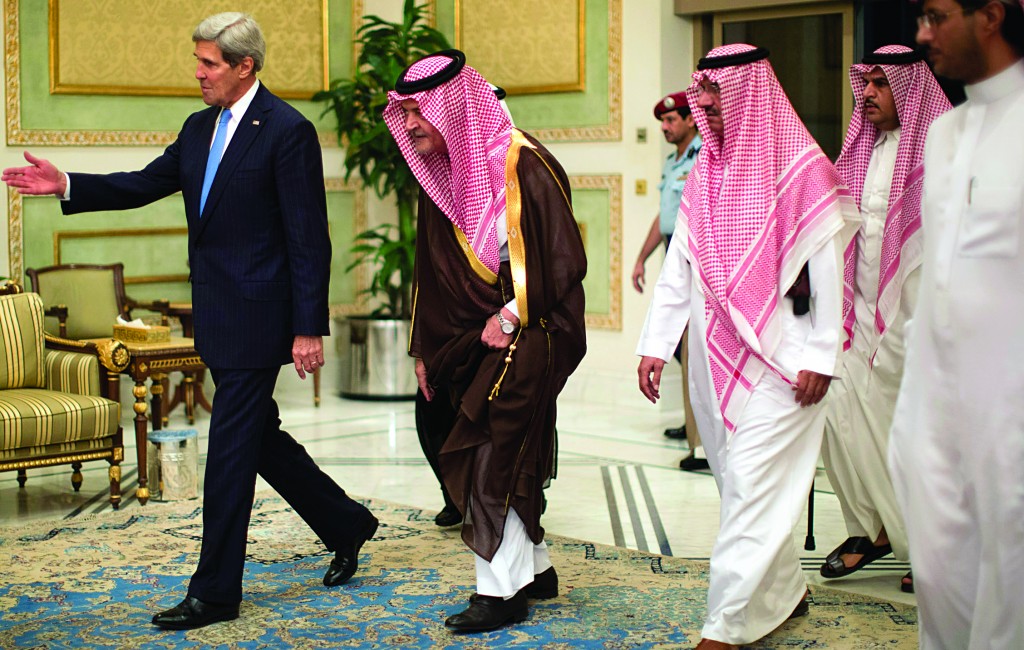 U.S. Secretary of State John Kerry moved Sunday to reassure America’s Arab friends that the United States will not allow them to be attacked “from outside,” in an apparent warning to Iran.

Speaking in Egypt while en route to Saudi Arabia, where he hopes to mend relations strained by Saudi unhappiness with U.S. actions in Syria, its tentative warming with Iran and stance on Egypt, Kerry acknowledged differences with some partners but stressed they shared common goals in each case.

In addition, he said Saudi Arabia and other U.S. allies in the Gulf could count on America’s support.

“The United States will be there for the defense of our friends and our allies,” Kerry told reporters in Cairo. “We will not allow those countries to be attacked from outside. We will stand with them.”

He specifically mentioned the Sunni majority states of Saudi Arabia, the United Arab Emirates, Qatar, Jordan and Egypt as nations, along with unspecified “others.” Those others likely would include Israel, the strongest U.S. ally in the region. All have vested interests in seeing an end to the turmoil in Syria and are extremely wary of Shiite Iran’s regional intentions.

But Saudi officials have been the most vocal. They have complained that the United States did not follow through on its threat to punish Syrian President Bashar Assad with military strikes for his government’s use of chemical weapons. Last month, the Saudis won but turned down an elected seat on the U.N. Security Council, saying the body had proved itself largely meaningless because of its inability over two years to address the crisis in Syria. The Saudis also have watched with increasing nervousness as President Barack Obama has approved a cautious opening with their archrival, Iran.

Kerry, who met late Sunday in Riyadh with Saudi Foreign Minister Prince Saud al-Faisal and will see King Abdullah on Monday, acknowledged U.S. divisions with Gulf nations over Syria and Iran, but he played down those differences. He said some countries do differ with U.S. “tactics” in Syria.

“There may be some differences on a tactic here and there,” he said. But he said they all agree on the goal of ending the fighting and forming an interim government.

“We can have a difference on a policy,” he said. “For instance, there are some countries in the region that wanted the United States to do one thing with respect to Syria and we have done something else.”

He stressed, though, that “those differences on an individual tactic on a policy do not create a difference on the fundamental goal of the policy. We all share the same goal that we have discussed — that is, the salvation of the state of Syria and a transition government put in place … that can give the people of Syria the opportunity to choose their future.”

Kerry said the United States would never allow Iran to obtain nuclear weapons. The administration is seeking a pause from the U.S. Congress in putting in place fresh penalties against Iran, in order to provide flexibility in negotiations.

A new round of nuclear talks between Iran and the five permanent members of the U.N. Security Council and Germany is set to begin Thursday in Geneva.

“Iran will not get a nuclear weapon,” he said. “That is a promise by the president of the United States.” His comments in Cairo came on the first stop of a 10-day tour of the Middle East, Europe and North Africa.