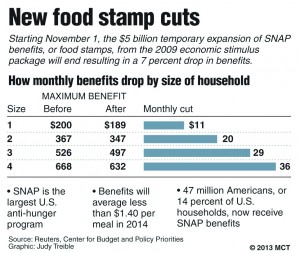 More than 47 million Americans who receive food stamps will see their benefits go down starting Friday, just as Congress has begun negotiations on further cuts to the program.

Beginning in November, a temporary benefit from the 2009 economic stimulus that boosts food stamp dollars will no longer be available. According to the Agriculture Department, that means a family of four receiving food stamps will start receiving $36 less a month.

The benefits, which go to 1 in 7 Americans, fluctuate based on factors that include food prices, inflation and income. The rolls have swelled as the economy has struggled in recent years, with the stimulus providing higher benefits and many people signing up for the first time.

As a result, the program has more than doubled in cost since 2008, now costing almost $80 billion a year. That large increase in spending has turned the program, now called the Supplemental Nutrition Assistance Program, or SNAP, into a target for legislators looking to reduce spending.

Negotiations on a wide-ranging farm bill, including cuts to the SNAP program, began Wednesday. Five-year farm bills passed by both the House and the Senate would cut food stamps, reductions that would come on top of the cut that will go into effect Friday. But the two chambers are far apart on the amounts.

Legislation passed by the GOP-controlled House would cut food stamps by an additional $4 billion annually and tighten eligibility requirements. The House bill would also end government waivers that have allowed able-bodied adults without dependents to receive food stamps indefinitely and allow states to put broad new work requirements in place.

The Senate farm bill would cut one-tenth of the House amount, with Democrats and President Obama opposing major cuts.

This article appeared in print on page 3 of the November 1st, 2013 edition of Hamodia.