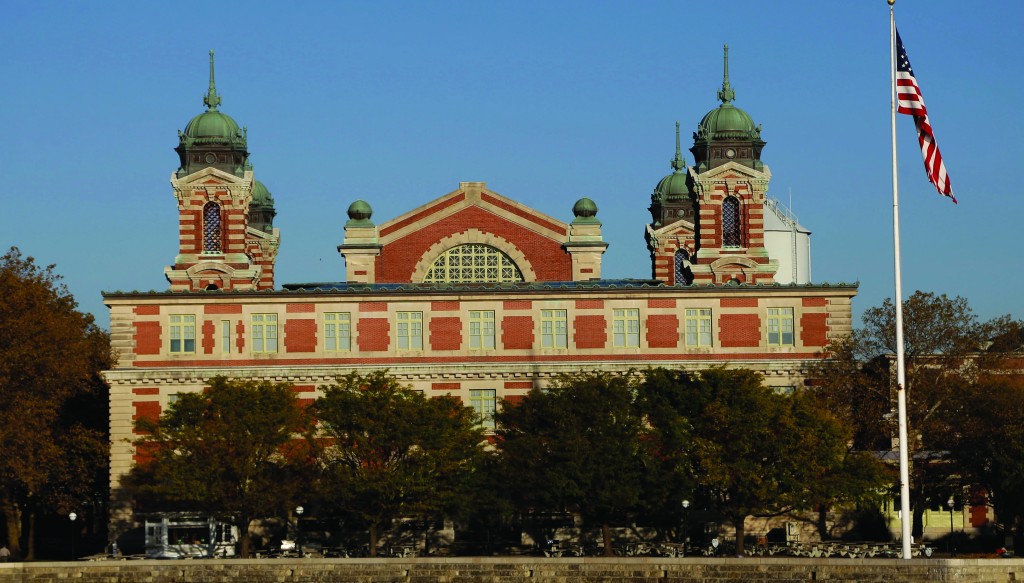 The island that ushered millions of immigrants into the United States and became a monument to its mosaic of ancestries reopened to visitors Monday for the first time since Superstorm Sandy, adding a chapter to the narrative of hard-won recovery on the eve of the storm’s anniversary.

The Ellis Island Immigration Museum hasn’t fully recovered from the floods that filled its basement; many of its more than 1 million photographs and other artifacts are still in storage, and officials haven’t yet repaired computers the public can use to research forebears. But visitors were able to return to much of the graceful main building, including some exhibits, and to absorb the island’s singular views of the nearby Statue of Liberty and lower Manhattan.

“Awe” was Cathy Scheer’s reaction as she stepped off the first visitor ferry Monday morning. The Riverside, Calif., resident and a colleague at a school bus driver-training company had arrived a day early for a business trip in hopes of seeing the statue and Ellis Island.

Some of Scheer’s German and Scottish forebears immigrated via Ellis Island, so she was excited at “the chance to walk in my ancestors’ shoes,” she said.

Sandy’s surge swamped Ellis Island, the entry point for about 12 million newcomers from 1892 to 1954 and a public historic site since 1976. David Luchsinger, the National Park Service superintendent for the island and the Statue of Liberty, arrived the day after Sandy to find doors and windows blown out, pilings strewn on the grounds and the basement full of water, which destroyed the electric, heating, air conditioning and phone systems.

Liberty Island was also inundated during Sandy and reopened on July Fourth, only to close again for a time during the recent partial federal government shutdown.

The floodwaters didn’t touch the Ellis Island exhibits, which are on the first and higher floors, but they were later moved to storage because they could have deteriorated without climate control.

Rebuilding and storm proofing the electrical and other networks without marring the 1900, Beaux-Arts-style building was a challenge to plan and is still a $21 million, 18-month work in progress. Heat is currently running through the building’s original radiators, instead of the modern climate-control system.

Officials are still working on regulating the radiators before bringing back venerable documents, clothes, musical instruments and other objects, Luchsinger said. He hopes to start returning the items to their galleries within about a month and to have the public family-research computers running again by the end of November.

“Yes, we are shy a little bit on exhibits and artifacts, but we’re not shy on character at all,” he said standing before a glass-enclosed array of steamer trunks and suitcases in the former baggage room where immigrants left belongings.

The climate-control and other systems are being elevated and waterproofed as much as possible without compromising the building’s historic and architectural qualities, Luchsinger said. He estimates the building will be able to recover from any future major floods in a month or less.

“This is an icon,” he said, speaking of the island and its role in the nation’s diversity. “It’s what this country is all about.”