Stocks Rise on Profit Gains From Microsoft, Others 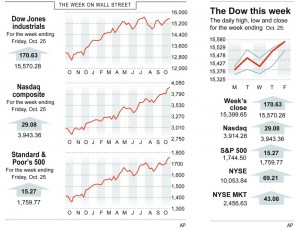 After reporting results that topped expectations, Microsoft rose 6 percent and Amazon.com rose 9 percent. The Standard & Poor’s 500 index hit a record. The Nasdaq is the highest it’s been in 13 years.

The gains were broad. All 10 industry groups in the S&P 500 rose, led by telecommunications with an increase of 1 percent.

Earnings for companies in the S&P 500 index are expected to grow 4.5 percent in the third quarter over the same period a year ago, according to S&P Capital IQ, a research firm. While respectable, that rate of growth is less than half what was expected at the start of the year.

Some market watchers say even that profit growth may not last. They note that much of it is coming from cutting expenses, not increasing revenue, as the global economy remains sluggish.

“The question is: ‘What is the outlook for earnings?’” Steven Ricchiuto, chief economist at Mizuho Securities, said. “There is only so much you can do with cost-cutting.”

Major U.S. stock indexes have soared this year. The S&P 500 is up 23 percent, the Nasdaq composite 31 percent. In addition to higher earnings, investors have been encouraged by continued economic stimulus from the Federal Reserve. Many had expected the Fed to pull back from its stimulus before the end of year, but now think the central bank will hold off until next year, possibly until March.

The Fed is buying $85 billion worth of U.S. government and other bonds with the aim of keeping interest rates low.

The stimulus program has helped investors brush aside a few warning signs about the market. Stocks look fully priced by some measures comparing them to earnings, for instance. And revenue growth is slowing. Revenue for S&P 500 companies is expected to grow just 2 percent for all of 2013, half the growth of the year before.

Economic news Friday suggested they may struggle to increase sales for a while yet.

Also, the University of Michigan said its index of U.S. consumer sentiment fell in October as concern grew that the partial government shutdown this month and the political fight over the nation’s borrowing limit would slow growth.

Among stocks making big moves, Microsoft beat analysts’ forecasts for revenue and earnings, giving hope to investors that its shift to devices and services from PC-based software will be successful. Microsoft rose $2.01, or 6 percent, to $35.73 after reporting a 17 percent increase in third quarter net income late Thursday.

Amazon.com was up $31.18, or 9 percent, to $363, as investors continue to shrug off its losses. The online retailer reported late Thursday that its revenue surged 24 percent to $13.8 billion in the third quarter, more than financial analysts had expected.

Zynga rose 19 cents, or 5 percent, to $3.73 after the internet gaming company reported it had cut its losses in the third quarter. Zynga is trying to appeal more to users of smartphones and tablet computers under a new CEO.

In bond trading, the yield on the 10-year Treasury note, a benchmark for mortgages and many other kinds of loans, edged down to 2.51 percent from 2.52 percent. The yield has fallen sharply since Sept. 5, when it hit 3 percent, and is the lowest it’s been in three months.

This article appeared in print on page 8 of the October 28th, 2013 edition of Hamodia.