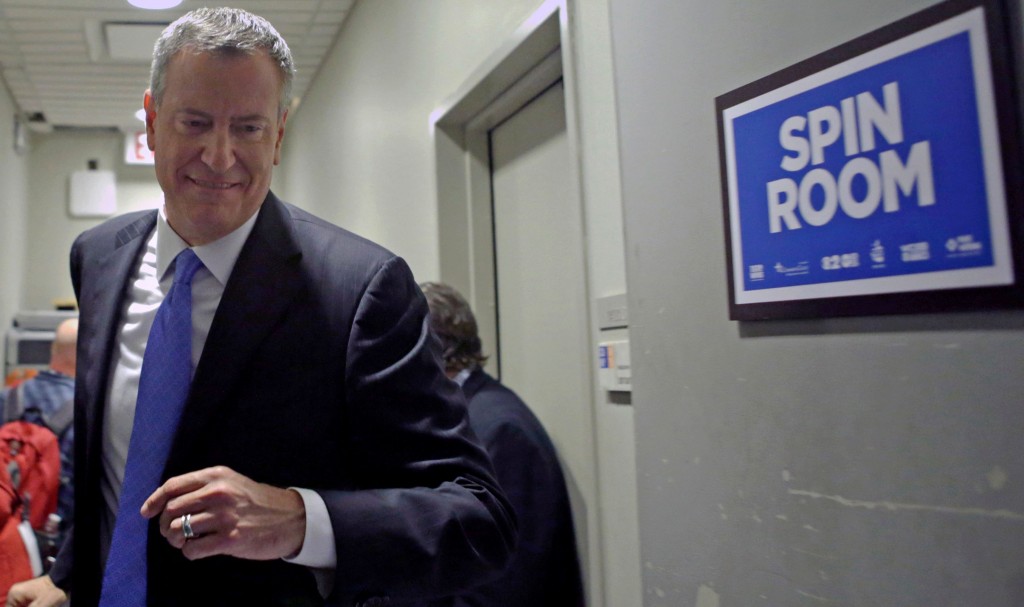 It was Democrat Bill de Blasio and Republican Joe Lhota on the podiums, but the ghosts of their former bosses were at the table at the sometimes-bitterly personal Tuesday night debate that featured a trailing but energized Lhota taking the fight to his rival on security and taxes.

De Blasio, who worked for Democrat David Dinkins, and Joe Lhota, who was a top aide to Republican Rudolph Giuliani, frequently raised their voices over charges of race-baiting and the legacies of their one-time mentors.

In particular, the debate was marked by a nasty back-and-forth over an ad released by Lhota last week that featured graphic images of violence to suggest that the city would return to its pre-Giuliani, crime-filled past if de Blasio is elected.

“It’s race-baiting and it’s fear-mongering, and you know it,” said de Blasio, the city’s public advocate who is looking to become the city’s first Democratic mayor since his former boss was elected in 1989.

“Anybody who looks at that ad knows what he’s up to and it’s what his boss, Rudy Giuliani, used to be up to,” said de Blasio. “And it’s not what a mayor should be doing.”

“Stop. There’s nothing race-baiting about it,” Lhota interrupted. “You want to throw out the race card? Let’s talk about the various different mass cards that are put out for the thousands of people that are killed in this city…. Don’t tell me I threw out the race card because there is nothing racial in there, and Bill, you cannot stoop that low.”

Lhota angrily said that he was “sick and tired of you impugning the integrity of Rudy Giuliani, who created the renaissance in this city, who started the programs to make all New Yorkers safe, to expand our economy, to expand our jobs.” He then argued that the “murders that happened, the race riots that happened” under Dinkins led to his loss to Giuliani in their 1993 rematch.

“That’s the reason why he got thrown out — because he was divisive,” said Lhota, who was seemingly so irritated by de Blasio’s claim that the ad was filled with racial imagery that Lhota blurted out: “What is the color of the sky on your planet?”

To that, de Blasio smiled and responded: “Mr. Lhota appears to think he has his own planet,” drawing some laughs from the audience. But de Blasio also seemed irritated at times as Lhota adopted a significantly more aggressive tone than in their first debate last week.

“Look, we are one mayor away from unsafe streets, unsafe schools and unsafe fiscal policies,” warned Lhota in his closing remarks, asking, “In two weeks, when you go to vote on November 5th … do you want your vote to be safe or sorry?”

In that meeting, Lhota appeared caught off guard by de Blasio’s decision to eschew the play-it-safe strategy he’d used since the primary and go on the offensive, repeatedly linking Lhota to the conservative tea party, a natural play in a city where registered Democrats outnumber the GOP by nearly 6-to-1.

De Blasio went to that well again on Tuesday, but Lhota was ready with some snappy comebacks, twice suggesting that de Blasio was so “obsessed with tea” that he resembled the Mad Hatter from “Alice in Wonderland.”

Lhota also brandished his bipartisan credentials by stressing that he was far more moderate than the national Republican Party and noting that he was appointed to run the region’s transit agency by Gov. Andrew Cuomo, a Democrat. His widely praised work steering the agency through Superstorm Sandy, which struck the city one year ago next week, was the impetus for his mayoral campaign.

Lhota also invoked Cuomo by claiming that the governor would not sign off on de Blasio’s plan to raise taxes on the wealthy to fund universal pre-kindergarten, the public advocate’s signature campaign promise. De Blasio insisted that Cuomo was open to the idea.

On Wednesday, Lhota agreed with the general consensus that his debate performance was significantly more robust than his first one last week. 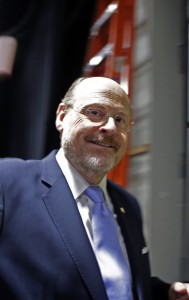 A day after delivering a fiery debate performance designed to jumpstart his sluggish campaign, Lhota redoubled his criticisms of de Blasio, suggesting that his rival showcases his African-American wife and children in all his ads because “he has no policies.”

De Blasio has put his family at the center of his advertising campaign. One ad featuring his Afro-sporting 15-year-old son Dante is credited with helping de Blasio’s unlikely surge to the Democratic nomination.

“My wife and my daughter are both wonderful people,” Lhota said. “My family has taken a position just like the Clintons did: let’s not focus on Chelsea. I am the candidate. My wife is my partner. The reality is, don’t fall into the trap, wonderful family, great mayor. Ed Koch: no family, great mayor.”

“If you didn’t have any policies and plans, you’d put your lovely family out there,” he said. “It’s as simple as that.”

“I mean, he talks a good game. But, boy, he can’t get even get into the first inning because once you go past and ask any type of a detailed question, it’s blah blah blah blah blah,” Lhota told reporters after a speech in Manhattan on Wednesday.

De Blasio responded during a rally on the steps of City Hall to announce his support for immigration reform by repeatedly flipped through his 69-page policy booklet.

“I think we may even have a copy of our platform book somewhere over there?” de Blasio said. “Hand it over sir!” he told an aide.

“I’d like to visually display — why, what’s this? My friends, this is a platform book, our friends in the media. Look at all the pages of platforms,” he said, turning page after page. “We put this out months ago. At the time, one of our leading newspapers said it was one of the most comprehensive mayoral platforms that have been put out in recent memory. It is filled with bold, progressive ideas that acknowledge we can’t continue the status quo in this town and we have to make serious changes.”

The frontrunner again went back to his booklet later when questioned about the legacies of the Dinkins and Giuliani administrations.

“I just wish I had some way to illustrate that my vision is forward-looking and about the substantive changes we need to make in this city,” de Blasio said sarcastically.

“I just wish I had something that would physically — oh look, I have a platform book which was published months ago. Which is the reason a lot of people here are actually supporting me because of the vision and the ideas in this book.”

Meanwhile, trailing by more than 40 points, Lhota says he plans to stay aggressive through the finish line.

Some of that aggressiveness came during a Wednesday morning speech to the Building Owners and Managers Association of New York, a real estate group.

“When you think about the billions of dollars in revenue that your buildings provide for the City of New York [it] is extraordinary,” he said, slyly continuing: “But I want you to think about this: you’d be giving a lot more if my opponent wins.”

He pressed on with his attacks on de Blasio, contrasting his rival’s experience with his own.

“We’ve seen that movie before, the dark days of the ‘80s, where Bill de Blasio learned the ropes. The problem is, he learned all the wrong lessons,” Lhota charged. “It’s the opposite of the tried and the true. It’s the tried and the fail.”

De Blasio served as a top aide to Dinkins’s deputy mayor, Bill Lynch. Lhota contrasted that with his own former boss, Rudy Giuliani.

“This all started with my opponent,” he said. “That’s fine. I’m inextricably linked to Rudy Giuliani. But if that’s the direction he wants to go in, I want to remind everybody that he worked for the biggest failure of a mayor that’s ever hit the shores of the City of New York. David Dinkins was an abysmal failure right from the get-go.”

“Did you miss me?” Lhota told a Capital New York reporter who wondered after the speech about his new aggressive style. “I’m back!”

Deprived of any newspaper endorsements in the Democratic primary, Bill de Blasio earned his first editorial backing on Wednesday.

The New York Observer said that they were ideologically aligned with Republican Joe Lhota, but disappointment over his campaign led them to back the Democrat in a “cautious” but “hopeful” way.

“Almost 20 years after the election of Rudolph Giuliani — a seismic event in New York political history — New York is preparing to turn the page on a remarkable era of change, challenges, tragedy and progress,” the editorialist wrote. “We believe Bill de Blasio is the better choice to guide the city as it continues to adapt to the challenges of the 21st century.”

The Observer, which publishes the Politicker website, pronounced themselves skeptical of de Blasio’s “divisive rhetoric over the summer,” particularly his “criticism of the New York Police Department and his embrace of higher taxes as the solution to New York’s problems [which] struck us not as progressive but as retrograde — ideas and rhetoric better suited to the New York of 40 years ago.”

“Mr. de Blasio … has run a superb campaign, and, yes, that means something,” they said. “What’s more, he’s as smart as they come, and, despite the caricature of his own making, he can be quite reasonable.”

The host committee of Democrat Bill de Blasio’s Monday night fundraiser with Hillary Clinton raised $1 million. But its host committee was full of lobbyists hoping for influence in a de Blasio mayoralty by donating lavishly to his campaign, a Daily News report charged.

“The level of Bill de Blasio’s hypocrisy is alarming. He takes cash from developers and special interests while telling New Yorkers he supports something different,” said Jessica Proud, a spokeswoman for Republican Joe Lhota. “I don’t think anyone can trust who the real Bill de Blasio is when he always tries to play both sides.”

De Blasio spokesman Dan  declined to comment on the report.

Among the 42 event chairmen or members of the host committee for the Roosevelt Hotel dinner was James Capalino, a former lobbyist for a developer who wants to build high-end condos near the site of the shuttered St. Vincent’s Hospital, and Suri Kasirer, who has in the past discussed moving the Atlantic Yards housing project with de Blasio.

However, Kasirer said that she hosted the event more as a way of rekindling an old friendship than about future business with the city, and as “a way for a lot of New Yorkers to give a boost to Hillary and let her know that we were eagerly waiting for her decision and want her to run [for president].”

Costas Panagopoulos, a political science professor at Fordham University, said the list wasn’t surprising given that “money follows power and special interests can read the polls just as well as anyone else can.”

“Race to City Hall 2013” is a daily Hamodia column focusing on the New York City mayoral race, ahead of the general election on Nov. 5. It is culled from reports from AP, Politicker, the New York Post, Daily News and others.