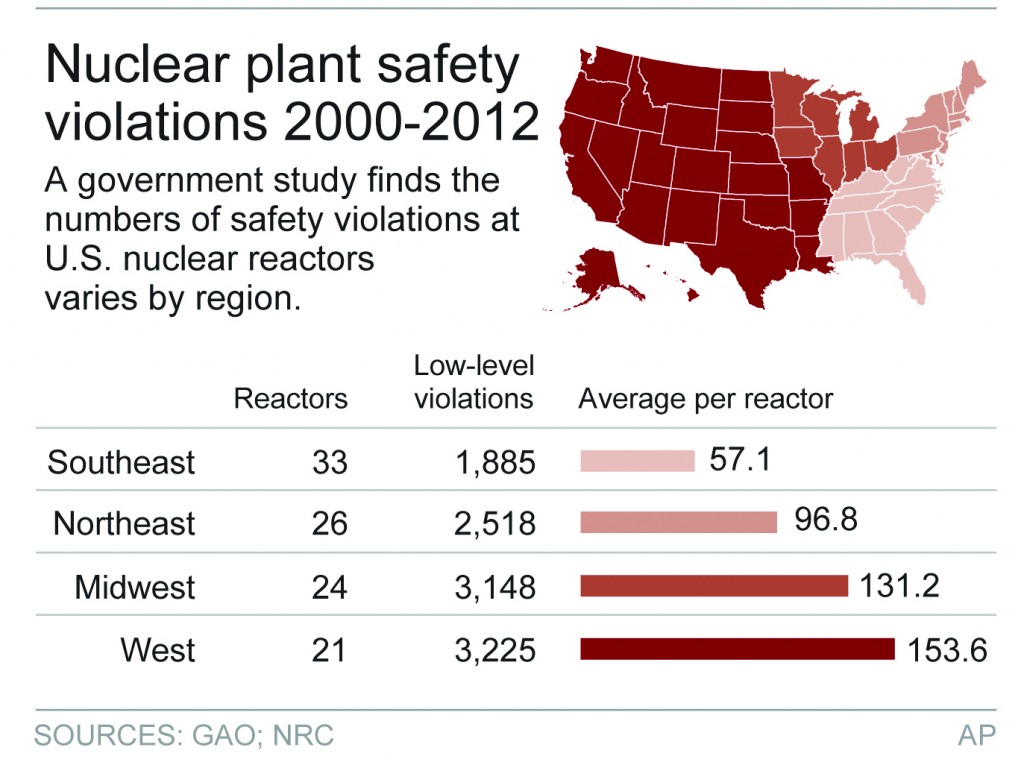 The number of safety violations at U.S. nuclear power plants varies dramatically from region to region, pointing to inconsistent enforcement in an industry now operating mostly beyond its original 40-year licenses, according to a congressional study awaiting release.

Nuclear Regulatory Commission figures cited in the Government Accountability Office report show that while the West has the fewest reactors, it had the most lower-level violations from 2000 to 2012 — more than 2 1/2 times the Southeast’s rate per reactor.

The Southeast, with the most reactors of the NRC’s four regions, had the fewest such violations, according to the report, a copy of which was obtained by The Associated Press.

The striking variations do not appear to reflect real differences in reactor performance. Instead, the report says, the differences suggest that regulators interpret rules and guidelines differently among regions, perhaps because lower-level violations get limited review.

The study also says that the NRC’s West region may enforce the rules more aggressively and that common corporate ownership of multiple plants may help bolster maintenance in the Southeast.

However, the reasons aren’t fully understood because the NRC has never fully studied them, the report says. Right now, its authors wrote, the “NRC cannot ensure that oversight efforts are objective and consistent.”

Told of the findings, safety critics said enforcement is too arbitrary and regulators may be missing violations. The nuclear industry has also voiced concern about the inconsistencies, the report said.

The analysis was written by the GAO, the investigative arm of Congress, at the request of four senators. Before the government shutdown, the report had been set for public release later this month.

Steven Kerekes, a spokesman for the industry group Nuclear Energy Institute, declined to comment pending release of the report. The NRC’s public affairs office had no comment, citing the government shutdown.

The GAO analysis focuses on lower-level safety violations known as “nonescalated.” They represent 98 percent of all violations identified by the NRC, which regulates safety at the country’s commercial reactors.

Lower-level violations are those considered to pose very low risk, such as improper upkeep of an electrical transformer or failure to analyze a problem with no impact on a system’s operation, such as the effect of a pipe break. Higher-level violations range from low to high safety significance, such as an improperly maintained electrical system that caused a fire and affected a plant’s ability to shut down safely.

The GAO’s analysis shows 3,225 of these violations from 2000 through the end of 2012 across 21 reactors in the West. By contrast, there were 1,885 such violations in the Southeast. Yet that region is home to 33 reactors — 12 more than in the West. The West registered 153.6 violations per reactor, while the Southeast saw just 57.1.

The GAO found less regional variation in higher-level safety violations. The five plants with the most higher-level violations per reactor from 2000 to 2012 were Davis-Besse in Oak Harbor, Ohio, with 14; Kewaunee, nine; Perry, eight; Palisades, in Covert, Mich., eight; and Fort Calhoun, in Fort Calhoun, Neb., eight.

“I believe the oversight process is totally arbitrary,” said Paul Blanch, an engineer who once blew the whistle on problems from within the industry and later returned to work on safety. He also said the NRC isn’t providing consistent training to inspectors and regional staff. Blanch was made aware of the GAO findings by the AP.

The report also indicates that some regulators may be missing small problems or giving them short shrift, safety experts said. And they said little violations can pile up and interact with one another to create bigger risks.

“Any time you start tolerating minor problems, you’re just setting the stage for major safety problems down the road,” said nuclear engineer David Lochbaum of the Union of Concerned Scientists. He once trained NRC staff.