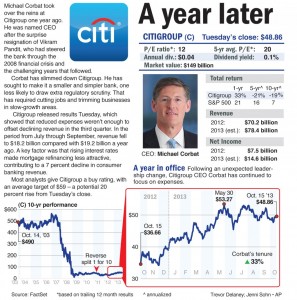 Excluding that item as well as debt-related accounting adjustments and tax benefits in both quarters, the bank made $1.02 per share – a decline of 4 percent and below the $1.04 expected by analysts surveyed by Thomson Reuters.

Michael Corbat, Citi’s chief executive, said the bank continued to make progress in its turnaround. He said the bank had further unwound its Citi Holdings segment, a repository of troubled mortgage investments stemming from the financial crisis.

“We performed relatively well in this challenging, uneven macro environment,” Corbat said in a statement. “While many of the factors which influence our revenues are not within our full control, we certainly can control our costs, and I am pleased with our expense discipline and improved efficiency year-to-date.”

Bond-trading revenue fell sharply in the third quarter – by 26 percent to $2.8 billion – amid “lower volumes and a more uncertain macro environment,” the bank said. Investment banking revenue also slid, but the bank saw an increase in equity markets revenue.

It was a year ago this week that Corbat took over as Citi’s CEO, following the ouster of Vikram Pandit.