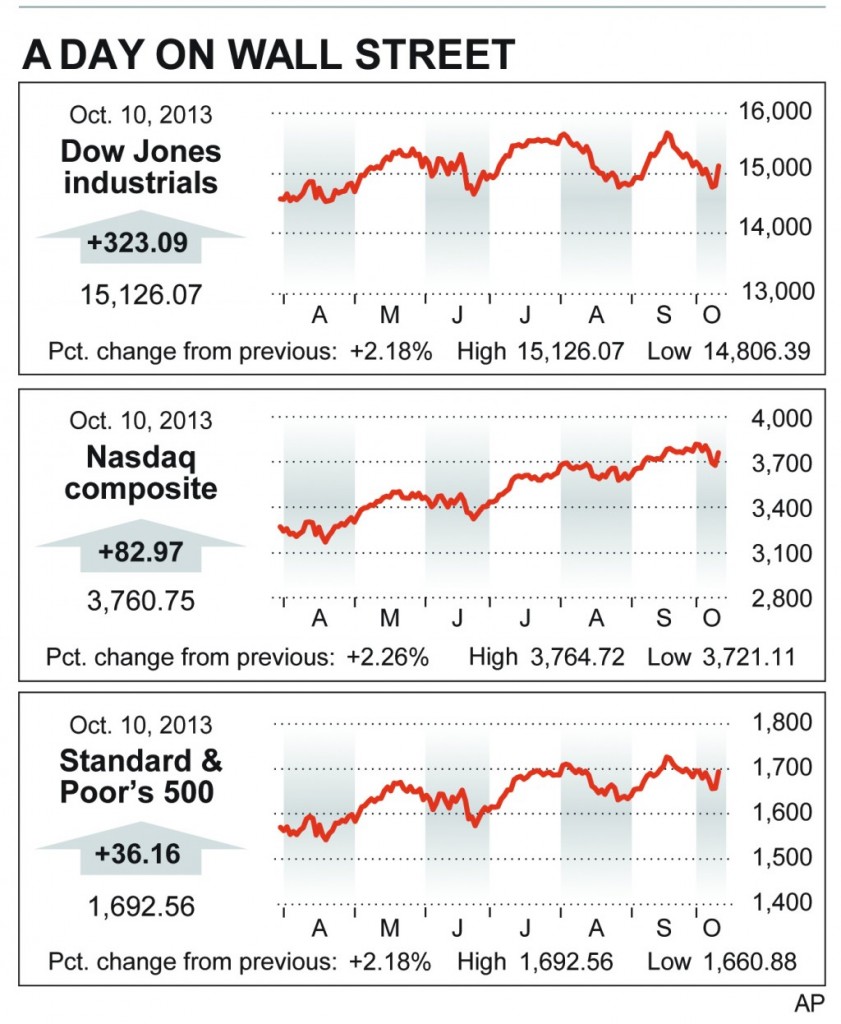 The Dow Jones industrial average soared more than 300 points Thursday after Republican leaders and President Barack Obama finally seemed willing to end a 10-day budget standoff that has threatened to leave the U.S. unable to pay its bills.

The news drove the Dow to its biggest point rise this year and ended a three-week funk in stocks. It also injected some calm into the frazzled market for short-term government debt.

Republican leaders said Thursday they would vote to extend the government’s borrowing authority for six week. A spokesman for Obama said the president would “likely” sign a bill to increase the nation’s ability to borrow money so it can continue paying its bills.

“Congressmen and women are coming to terms with how calamitous it would be if the debt ceiling was not raised,” said Joseph Tanious, global market strategist for J.P. Morgan Asset Management. “Cooler heads are prevailing.”

The final surge came even as Senate Majority Leader Harry Reid said Democrats would not negotiate with Republicans as long as the government remains partly shut. Reid’s comments were reported about 15 minutes before the market closed at 4 p.m. Eastern time.

Stocks have steadily declined since mid-September as Washington’s gridlock raised concern among investors that the U.S. could default on its debt and wreak havoc on global financial markets. While traders applauded a potential deal between the White House and Congress, more volatility could be ahead if it falls through.

“We don’t need some grand bargain; we just need to avoid a default,” said Brian Reynolds, chief market strategist at Rosenblatt Securities. “Just don’t bring us to the edge again.”

Thursday’s gains were extraordinarily broad. Of the 500 stocks in the S&P 500 index, only 11 fell. Banks and industrial stocks rose the most.

A possible compromise between the two political parties could not come soon enough. Treasury Secretary Jack Lew has said the government will hit its borrowing limit on Oct. 17. That would leave the U.S. with enough cash to last just a week or two before a default became a real risk.

A short-term extension of the debt limit is “the right approach,” said Jack Ablin, who manages $66 billion as chief investment officer at BMO Private Bank.

“It allows politicians to turn down the heat a bit while still keeping the broader issues on the front burner,” Ablin said.

There were also hopeful signs in the market for short-term U.S. government debt. The yield on the one-month Treasury bill eased to 0.21 percent from 0.27 late Wednesday.

The yield had spiked from near zero at the beginning of the month to as high as 0.35 percent Tuesday as investors dumped the bills out of concern that the government might not be able to pay them back when they’re due. Investors demand higher yields when they perceive debt as being risky.

In other government bond trading, the yield on the 10-year Treasury note edged up to 2.68 percent, from 2.67 percent late Wednesday.