US Housing Rebound Likely to Handle Spike in Rates 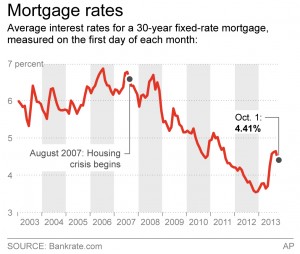 When mortgage rates began climbing in May from rock-bottom lows, Kevin Williams worried he might miss out on an opportunity.

So he listed his home in Orange County, Calif., and planned to buy a bigger house in San Diego after it sold. The process took all summer. Last week, he and his wife locked in a mortgage.

The extra time added at least $1,000 more a year than if they had secured a loan in May. Still, Williams believes they made a prudent decision.

“I don’t know what rates are going to be in four years,” he said. “I felt I had to act now before I was priced out.”

Williams’s justification — buy now or risk paying more later — is why many brokers and analysts remain confident that the housing recovery can handle higher mortgage rates. While the jump in rates should test the strength of the recovery, analysts foresee stable sales increases over the next year for a number of reasons.

Home prices have been rising at the fastest pace since 2006, helping Americans regain wealth they lost during the housing crisis. Many would-be sellers have been waiting out the downturn, and could put their houses on the market in the next year. That should ease supply constraints, one of the biggest obstacles for sales over the past year.

Financing a home is still more affordable than in decades past. The average rate on a 30-year mortgage remains a bargain at below 5 percent, and many buyers sense it won’t stay that low for long.

There’s also pent-up demand. A growing number of people are moving out from group homes or with relatives to form their own households, according to U.S. Census data. Sales typically increase when households grow.

“It’s the demographics that make a strong housing recovery pretty much a sure thing,” said Patrick Newport, a housing economist at IHS Global Insight.

Newport expects sales will rise 10 percent this year, to 5.14 million. After that, he predicts an 8 percent gain next year to roughly 5.55 million, and a 4.5 percent rise in 2015 to 5.8 million. All are relatively healthy levels.

Rates tend to rise when the economy is strengthening. More jobs and better pay would likely boost home sales.

Still, the increase in rates has added thousands of dollars to the cost of financing a home, at a time when wages have barely kept pace with inflation and unemployment is a still-high 7.3 percent.

And there’s some concern that the government shutdown could delay the processing of some home loans, particularly those backed by the Federal Housing Administration.

Buyers who could get loans in June and July moved swiftly to lock in the lower rates. Completed sales of previously occupied homes rose in August to a six-year high, according to the National Association of Realtors.

But fewer Americans signed contracts to buy homes in August. It typically takes a month or two for buyers to close on a house after locking in rates and signing a contract. Some analysts predict sales are cooling off this fall.

“I am concerned because prices are rising and higher rates squeeze your limits,” said Brian Guzman, a broker at Coldwell Banker in Chicago who mostly caters to first-time buyers.

Many buyers are carefully watching the change in mortgage rates.

Jeff Tyni and his wife are still shopping for a home in Orange County, Calif., and would like to buy soon. But if rates go much higher, they may continue renting.

“I would say 5 percent is the tipping point,” Tyni said. “If I have to pay over 5 percent, I’ll just wait.”

The Federal Reserve is also paying close attention to the spike in mortgage rates. That was a big reason the Fed opted last month not to slow its $85-billion-a-month in bond purchases, which are intended to keep longer-term interest rates low.

Rates began to increase in May, after Chairman Ben Bernanke signaled the Fed might reduce those purchases, if the economy strengthened. But the Fed held off last month, and since then, mortgage rates have fallen for three straight weeks.

Even small fluctuations in rates can translate into added costs or savings. In the case of the Williamses, it was a little of both.

The couple will close this month on a four-bedroom home. They secured a $607,000 mortgage in late September at 4.125 percent, a quarter-percentage point higher than what they were quoted in late May. That’s $88 more a month, or $31,504 over 30 years.

Kevin Williams says it could have been worse. In early September, he was quoted a rate of 4.375 percent, which would have added another $89 each month.

Still, they are buying in San Diego, one of the nation’s priciest real estate markets. The added financing costs convinced the couple to buy a smaller house.

“Essentially, we ended up giving up an extra bedroom,” said Williams.

Home sales typically drop off in the fall, because many buyers want their children enrolled in school when they move. Yet some brokers are still seeing steady demand.

Completed home sales at Century 21 Redwood Realty in Ashburn, Va. — about 30 miles outside of Washington, D.C. — are up 65 percent from a year ago, said Edward Berenbaum, co-owner of the brokerage. And attendance at open houses remains high.

“If you have a desirable listing that is priced where the market is, you’re not going to be on the market for too many weekends,” Berenbaum said.