A former Navy man launched an attack Monday morning inside a building at the Washington Navy Yard, spraying gunfire on office workers in the cafeteria and in the hallway at the heavily secured installation, authorities said. Thirteen people were killed, including the gunman.

Authorities said they were looking for a second possible attacker who may have been disguised in a military-style uniform.

Investigators said they had not established a motive for the shooting rampage, which unfolded in the heart of the nation’s capital, less than four miles from the White House.

As for whether it may have been a terrorist attack, Mayor Vincent Gray said: “We don’t have any reason to think that at this stage.” But he said the possibility had not been ruled out.

President Barack Obama lamented yet another mass shooting in the U.S. that he said took the lives of American patriots. He promised to make sure “whoever carried out this cowardly act is held responsible.”

It was the deadliest shooting at a U.S.-based military installation since Maj. Nidal Hasan killed 13 people and wounded 30 others in 2009 at Fort Hood in Texas. He was convicted last month and sentenced to death. 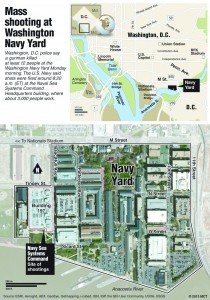 The FBI took charge of the investigation at the Navy Yard and identified the gunman killed in the attack as 34-year-old Aaron Alexis of Texas. He died after a running gunbattle with police, investigators said.

A federal law enforcement official who was not authorized to discuss the case publicly and spoke on condition of anonymity said Alexis was believed to have gotten into the Navy Yard by using someone else’s identification card.

It was not clear if that person was an accomplice or if the ID was stolen, authorities said.

The Navy said Alexis was a full-time reservist from 2007 to early 2011, and left as a petty officer third class. It was not immediately clear why he left.

He had been working for a fleet logistics support squadron in Fort Worth, Texas. The Navy listed his home of record as New York City.

In addition to those killed, at least three people — a police officer and two female civilians — were wounded. They were listed in stable condition and were expected to survive.

The rampage took place at Building 197, the headquarters for Naval Sea Systems Command, which buys, builds and maintains ships, submarines and combat systems. About 3,000 people work at headquarters, many of them civilians.

The Washington Navy Yard is a sprawling labyrinth of buildings and streets protected by armed guards and metal detectors, and employees have to show their IDs at doors and gates to come and go.

Witnesses described a gunman opening fire from a fourth-floor overlook, aiming down on people in the cafeteria on the main floor. Others said a gunman fired at them in a third-floor hallway. It was not clear whether the witnesses on different floors were describing the same gunman.

Patricia Ward, a logistics-management specialist, said she was in the cafeteria getting breakfast.

Todd Brundidge, an executive assistant with Navy Sea Systems Command, said he and other co-workers encountered a gunman in a long hallway on the third floor. The gunman was wearing all blue, he said.

Terrie Durham, an executive assistant with the same agency, said she also saw the gunman firing toward her and Brundidge.

“He aimed high and missed,” she said. “He said nothing. As soon as I realized he was shooting, we just said, ‘Get out of the building.’”

Around midday, police said they were searching for two men who may have taken part in the attack — one with a handgun and wearing a tan Navy-style uniform and a beret, the other with a long gun and wearing an olive-green uniform. Washington Police Chief Cathy Lanier said it was unclear if the men were members of the military.

But later in the day, police said that the man in the tan uniform had been identified and was not involved in the shooting.

As emergency vehicles and law enforcement officers flooded streets around the complex, a helicopter hovered overhead, nearby schools were locked down and airplanes at nearby Reagan National Airport were grounded so they wouldn’t interfere with law-enforcement choppers.

A short distance away, security was beefed up at the Capitol and other federal buildings, but officials said there was no known threat.

This article appeared in print on page 1 of the September 17th, 2013 edition of Hamodia.