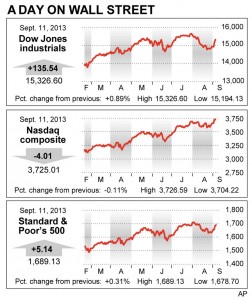 Investors decided the risk of a conflict with Syria is shrinking and sent stock prices higher.

The Dow Jones industrial average rose 135.54 points, or 0.9 percent, to 15,326.60 on Wednesday. A big decline in Apple and other technology companies held back the Standard & Poor’s 500 index and the Nasdaq composite. The S&P 500 managed a small gain, its seventh in a row.

U.S. and Russian diplomats are working on a plan that would lead to Syria giving up chemical weapons that President Barack Obama says were used against civilians. Obama said the U.S. will explore a possible diplomatic solution, though the U.S. military remains ready to attack.

After a tough August, stocks have been rising in September. The S&P 500 is up 3.4 percent so far this month. Since September began, a U.S. strike on Syria has gone from seeming imminent to being something that may or may not ever happen.

The risk that a confrontation with Syria could spread means most investors would be happy if the U.S. doesn’t act, said Cam Albright, director of asset allocation at Wilmington Trust Investment Advisors. “Markets are much more happy when they don’t have to deal with that particular risk,” he said.

Disappointment over Apple’s new iPhone lineup dragged down tech stocks. The two S&P 500 stocks with the biggest declines were Apple and the chip supplier Qualcomm, which makes the radio chip used in previous iPhones and is expected to make the chip used in the new iPhones, too.

Apple’s new iPhones struck many as only a modest advance from previous models. Investors fretted that Apple is offering the phone’s new operating system for free to people who already own older iPhones, removing an incentive to buy the new model. Also, some analysts felt that Apple’s lowest-priced iPhone — $549 without a two-year cell phone contract — isn’t cheap enough to win many buyers in emerging markets.

There was a broad expectation that Apple would cut prices more and go for bigger market share, said Wayne Lam, an analyst for IHS iSuppli, which tracks components used in electronics. Instead, they stuck with their business model of avoiding cheap versions of its products.

“It’s a proven business model, and good for them, but I think the expectation is that Apple is losing market share and they’re not innovating,” he said.

Utilities and tech were the only two industry sectors in the S&P 500 that fell. The other eight rose, led by energy stocks.

Traders on the floor of the New York Stock Exchange observed a moment of silence shortly before trading began on the 12th anniversary of the Sept. 11 terrorist attacks.

This article appeared in print on page 8 of the September 12th, 2013 edition of Hamodia.