Jews in Brooklyn Make Effort to Vote in NYC Primaries 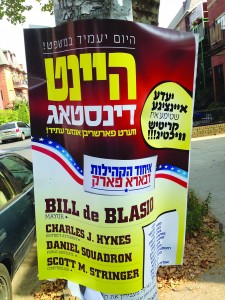 With speakers blaring from its roof, the converted delivery truck rounded the corner onto 16th Avenue in Brooklyn, the voice coming from the speakers emphatically shouted in Yiddish.

The truck, along with a barrage of signs and advertisements — as well as campaign workers hawking campaign material on busy street corners – were the sights and sounds of Brooklyn’s Boro Park neighborhood during Tuesday’s New York City election primaries. Despite the rare September heat, voters made their way to polling stations across New York to choose their nominees for Mayor, Brooklyn District Attorney, City Comptroller, and various local city council elections.

As the de Blasio truck drove down 16th Avenue it passed Flatbush resident Pinny Krieger and three other young men, all sitting on  large tricycles carrying  Yiddish advertisements supporting candidate Bill Thompson, the former City Comptroller who narrowly lost the 2009 Mayoral race to Mayor Michael Bloomberg. Krieger said that the crew, all of whom work for Cycle Media, would likely bike around eight miles in circles around the neighborhood by the day’s end.

When approached by Hamodia at the popular polling station at Montauk IS 223 at 4200 16th Avenue, some voters agreed to discuss their election choices.

One woman, who asked to be identified only by her initials, L.G., explained that despite the many endorsements that Public Advocate Bill de Blasio had received, she voted for Bill Thompson for mayor in the Democrat primary.

“I looked at the issues and saw that Bill de Blasio was too liberal for me, and his pandering really put me off. I think Bill Thompson will be more of a real friend of the frum community.”

The Democrat nomination for Brooklyn District Attorney has in recent weeks become an election to watch as well, with former prosecutor Ken Thompson putting up a tough fight against long-time incumbent Charles Hynes. Despite some misgivings, L.G. voted for Hynes.

“I look at the long-term record. I think as a whole Hynes’ record with regards to our community has been a good one; I’m not just going to judge him on a few things that he may have said recently.”

Tuesday’s elections chose the Democrat and Republican parties’ respective choices to represent them at the ballot box during the general election, which will take place on November 5.

A chassidishe man was next to exit the public school. Meir, the middle name that he asked to be quoted by, voted for Bill Thompson for mayor and Hynes for District Attorney too. “The kehillah here in Boro Park that I am a part of asked that we vote for them.”

Meir was followed soon by Chaim Laufer, who came out together with his son. While declining to state his voting choices, he did say that it was the action of voting that he valued more than the particular candidate he had voted for.

“It’s very important for our community to come out and vote in large numbers,” he said.

An elderly couple that had accidentally arrived at the wrong voting spot and were heading to their correct location both said they had still not made up their minds whom they would be pulling the lever for. “Nothing’s guaranteed until I go into the booth,”said the woman.

As the day moved on, a few short blocks away at PS/IS 192 on 18th Avenue between 47th Street and 48th Street, more voters lined up to cast their votes.

“I voted for Bill de Blasio and Elliot Spitzer for City Controller,” said one woman at the site, “I felt that they were the candidates that would help our community the most.”

Not more than two minutes later, N.Z. came rushing out of school, in a hurry to get on with his day. He too had voted for de Blasio, but was not as keen on Spitzer as the previous voter had been.

“I voted for [Manhattan Borough President Scott] Stringer for City Controller, and I would never even consider voting for Spitzer, he’s messed up too many times,” N.Z. said, referring to the former New York State Governor’s scandal-ridden past.

Across Brooklyn in Crown Heights, a Lubavitcher man was exiting the polling station at the corner of Albany Avenue and Lefferts Avenue. He was a registered Republican voting in the not-so-talked-about Republican primaries that pit former deputy mayor and MTA chairman Joe Lhota against grocery store billionaire John Catsimatidis and non-profit president George McDonald.

“I voted for John Catsimatidis. I think he’s less of a bureaucrat than Joe Lhota, and less of a socialist than any of them.”

While New York City is considered a liberal city, it has not chosen a Democrat as mayor since David Dinkins was elected in 1989. In the years since, Republicans Rudolph Giulianni and Michael Bloomberg, who became an Independent in 2009, have served a combined five terms as Mayor of New York. During that time New York’s crime rate has dropped dramatically, and it is consistently rated as the country’s safest big city year after year.

For C.G., another Crown Heights Lubavitcher, that record is enough for him to change his party identification from Democrat to Republican.

“I walked into the polling station and I was maybe the fifth Republican voter of the day,” said C.G., who voted for Joe Lhota in his first-ever Republican primary. “They actually started filling out my name on a Democrat paper before I corrected them. I changed my party affiliation because I don’t want to go back to the way this city was in the 1970s and 1980s. New York — and Crown Heights in particular — is safer than it’s ever been; why would I ever want it to go back to the way it was before?”

This article appeared in print on page 15 of the September 11th, 2013 edition of Hamodia.