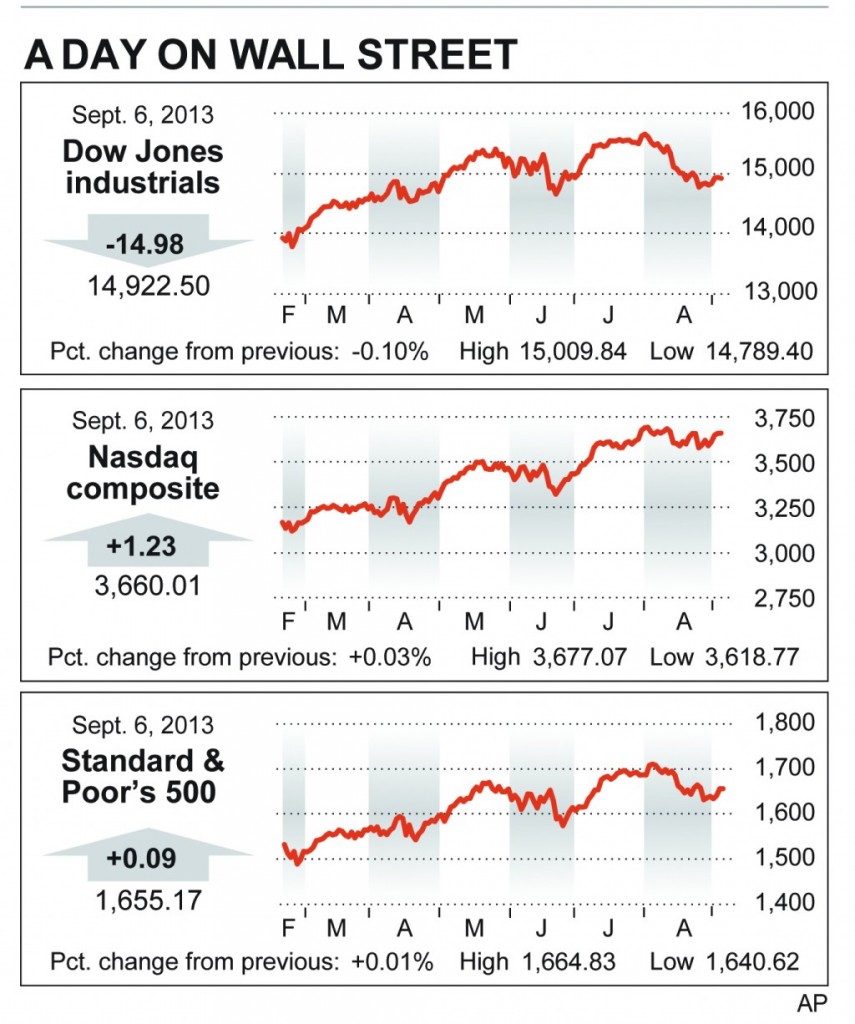 The stock market ended flat Friday as traders hoped for more economic stimulus from the Federal Reserve, and worried about escalating tensions between the U.S. and Syria.

While stocks ended close to where they began, their prices were volatile throughout the day. Stocks opened slightly higher but soon fell after Russian media reported that naval ships were en route to Syria, raising worries of a wider conflict and sending the Dow Jones industrial average down as much 148 points in the first half-hour of trading. The Dow rose as high as 15,009 and dropped as low as 14,789 — a big 220 point range.

Traders were rattled by conflicting forces. A mediocre August jobs report suggested that U.S. economic growth was slowing, while providing a reason for the Fed to keep up its stimulus program. The geopolitical risks of Syria added to the uncertainty Friday.

One clear trend emerged: investors moved money into safer assets. The yield on the 10-year Treasury note fell to 2.94 percent from 3 percent the day before. Relatively safe, dividend-paying stocks such as utilities were among the best performers in the S&P 500 and gold rose more than 1 percent.

The price of crude oil rose as traders anticipated that any escalation of tensions in the Middle East might disrupt the flow of oil from the region. Oil rose $2.07 to $110.43 a barrel.

Putting aside Friday’s volatility, Wall Street had a pretty good week. The S&P 500 rose 1.4 percent for the week, and the Nasdaq was up nearly 2 percent. It was the best five-day gain for the S&P 500 in two months.

“This was a horrible set of jobs figures, starting with large revision to last month’s number,” Tom di Galoma, head of fixed-income rates sales at ED&F Man Capital, wrote in an email to clients.

Friday’s jobs survey is the last major piece of economic data the Fed will have to consider before its September 17-18 policy meeting, when it will decide the fate of its large bond-buying program.

The Fed has been buying $85 billion in Treasurys and other bonds each month to keep interest rates low and encourage hiring and economic growth. It was widely believed that the Fed would start phasing out its purchases this month.

Most market watchers said they still believe the Fed will start pulling back in September, however the amount of the pullback may be smaller, Nuveen’s Chalupnik said.