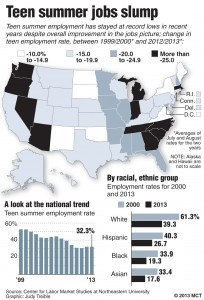 For the fourth consecutive summer, teen employment has stayed anchored around record lows, prompting experts to fear that a generation of youth is likely to be economically stunted, with lower earnings and opportunities in years ahead.

The trend is all the more striking given that the overall unemployment rate has steadily dropped, to 7.4 percent in August. And employers in recent months have been collectively adding almost 200,000 new jobs a month. It led to hopes that this would be the summer that teen employment improved.

“We have never had anything this low in our lives. This is a Great Depression for teens, and no time in history have we encountered anything like that,” said Andrew Sum, director of the Center for Labor Market Studies at Northeastern University in Boston. “That’s why it’s such an important story.”

Summer is traditionally the peak period of employment for teens, as they are off from school and get their first brush with employment and the responsibilities that come with it. Falling teen employment, however, is just as striking in the 12-month numbers over the past decade.

The picture these teen employment statistics provide looks even worse when viewed through the complex prism of race. Sum and colleagues did just that, comparing June and July 2000 with the same two months of 2013. In 2000, 61.28 percent of white teens 16 to 19 held a job, a number that fell to 39.25 percent this summer. For African Americans, a number that was dismal in 2000 – 33.91 percent of 16- to 19-year-olds holding a job – fell to a staggering low of 19.25 percent this June and July.

It wasn’t terribly better for Hispanics, who saw the percentage of employed teens fall from 40.31 percent in the two-month period of 2000 to 26.7 percent in June and July 2013.

That finding is important, because a plethora of research shows that teens who work do better in a wide range of social and economic indicators. The plunging teen employment rate is likely to mean trouble for this generation of young workers of all races.

“Kids that get work experience when they are 17 or 18 end up graduating from college at a higher rate,” said Michael Gritton, executive director of the Workforce Investment Board, which promotes job creation and teen employment in Louisville, Ky., and six surrounding counties. “There are economic returns to those young people, because they get a chance to work. Almost every person you ask remembers their first job, because they started to learn things from the world of work that they can’t learn in the classroom.”

The weak employment numbers sometimes prompt a mistaken narrative that younger workers are just staying in college longer rather than entering the workforce, or are going on to graduate school given the impaired jobs market.

“I think there is this myth out there that there is some silver lining for young people, that they are going on to college. … You don’t see an increase in enrollment rates over and above the long-term trend. You can’t see a Great Recession blip,” said Heidi Shierholz, a labor economist at the liberal Economic Policy Institute, a research group. “They are not in school. There’s been a huge spike in the not-in-school, not employed. It’s just a huge missed opportunity.”