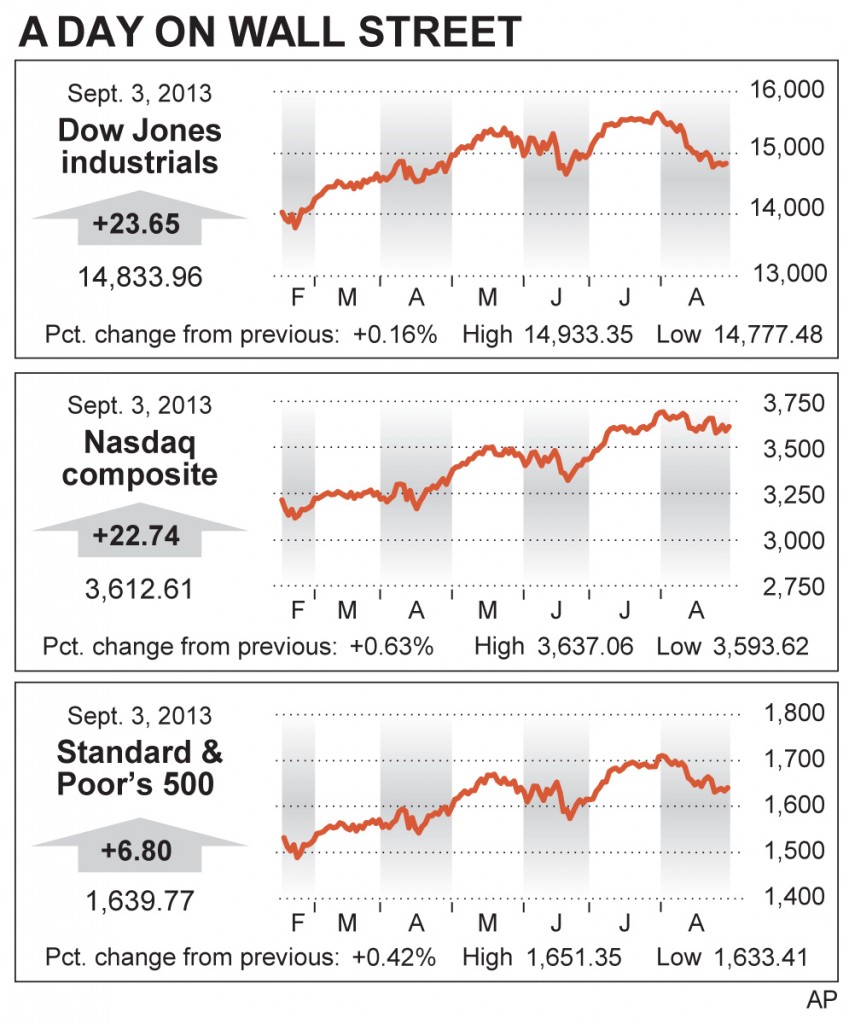 The stock market rose modestly Tuesday as renewed worries about a U.S.-led attack on Syria dampened an early rally.

Stocks surged in the opening minutes of trading as traders felt that a U.S. attack on Syria wasn’t imminent after President Barack Obama announced over the weekend that he would seek congressional approval for a strike.

But the early rally faded after the top Republican in Congress said he would support President Obama’s call for the U.S. to take action. Speaking in the late morning, House of Representatives Speaker John Boehner said the use of chemical weapons must be responded to.

“Key Republicans seem to agree with Obama on Syria,” said JJ Kinahan, chief derivatives strategist for TD Ameritrade. “It puts us in a difficult situation as to what might happen from here.”

The Dow was also held back by Microsoft and Verizon, which both slumped after announcing deals.

The stock market also got an early boost from a report showing that U.S. manufacturing expanded last month at the fastest pace since June 2011. The report was better than economist had expected, according to estimates compiled by data provider FactSet.

In corporate news, CBS surged $2.40, or 2.7 percent, to $53.50 after the broadcaster and Time Warner Cable reached an agreement that ended a blackout of CBS and CBS-owned channels.

Other corporate news was disappointing. Microsoft fell $1.52, or 4.6 percent, to $31.88 after the software company said it would acquire Nokia’s smartphone business and a portfolio of patents and services. Microsoft is trying to capture a slice of the lucrative mobile computing market that is dominated by Apple and Google, and investors are concerned that Microsoft won’t succeed.

After a tough August, stocks may struggle to rally in September because of a string of events that could shake investors, said Randy Frederick, managing director of active trading and derivatives at the Schwab Center for Financial Research.

The S&P 500 logged its worst performance since May 2012 last month as investors fretted about when the Federal Reserve will cut its economic stimulus. The Fed’s next meeting, which starts Sept. 17, is when many on Wall Street think the central bank will begin winding down its massive bond-buying program.

Lawmakers in Washington may also throw investors a curve ball.

To keep the government running, Congress needs to pass a short-term spending bill before the fiscal year starts Oct. 1. Then there’s the government’s $16.7 trillion borrowing limit. Treasury Secretary Jacob Lew warned that, unless it’s raised soon, the government would lose the ability to pay all of its bills by the middle of October.

Political wrangling in Washington shook financial markets in August 2011, when lawmakers fought over raising the debt ceiling. That led the rating agency Standard & Poor’s to strip the U.S. of its triple-A credit rating.

“All these catalysts out there … are still there,” said Frederick. “There’s just not enough upside catalysts, and there’s plenty of downside catalysts.”

September has often been a losing month for the stock market. Since 1945, the S&P 500 index has slumped nearly six out of every 10 Septembers, with an average loss of 0.6 percent.

In government bond trading, the yield on the 10-year Treasury note climbed to 2.86 percent from 2.79 percent Friday. U.S. markets were closed Monday for Labor Day.