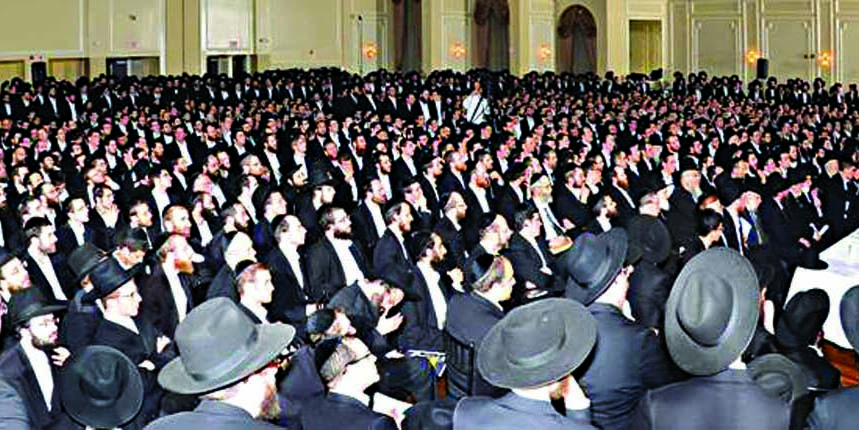 An estimated 5,000 people gathered together on Monday night in Lakewood, at Ateres Chana in Bais Faiga School, for an atzeres tefillah and hisorerus, in conjunction with Keren Birchas Shmuel, in response to the harsh laws and financial cuts that are being imposed on our brothers in Israel.

Keren Birchas Shmuel was founded 10 years ago by Harav Dovid Schustal, shlita, and, l’havdil bein chaim l’chaim, Harav Shmuel Berenbaum, zt”l, when the Israeli government began to cut family benefits. This fund sends money to kollel familes in Eretz Yisrael before every Sukkos and Pesach to help them purchase their Yom Tov needs.

The turnout exceeded all expectations. Maariv was scheduled for 8:30 p.m., at which point there was not a seat available in the hall and the side rooms and additional tent were filled to capacity as well. Many had to make do with sitting on the surrounding streets.

Emcee Reb Menashe Frankel began the evening by explaining that this year’s gathering is unique because it comes against the backdrop of a clear declaration of war on amalei Torah and it is therefore crucial that we are inspired and stimulated to strengthen our learning and make a stand for the kvod haTorah that is being attacked in Eretz Yisrael!

Harav Malkiel Kotler stressed the importance of being nosei b’ol im chaveiro. When the secularists direct their assault on bnei Torah in Eretz Yisrael, they mean all yungeleit! We are under attack together and we must share the burden with our brothers in Eretz Yisrael.

The Rosh Yeshivah noted that  although details of the new laws may differ, it is clear that they share a common denominator — to get yungeleit out of kollelim.

Harav Chaim Epstein brought in the concept of Malchuyus in connection to Rosh Hashanah. Making Hakadosh Baruch Hu our Melech means we should emphasize our reliance on Hashem throughout our lives. All materialistic things should only be secondary to what our Melech wants and expects of us as His people.

The guest speaker, Harav Elya Chaim Swerdloff, began by quoting the Chofetz Chaim’s words uttered at the first Knessiah Gedolah: that when any mitzvah is being threatened, we must fight to uphold it and correct what’s wrong, just as we would fix a broken limb. However, when the Torah is under attack, we must react as we would if the heart stopped beating! The way to do this is by strengthening our own learning and respecting all those who are learning.

Harav Swerdloff ended his inspiring speech by once again quoting the Chofetz Chaim based on the Selichah on Tzom Gedaliah, “Torah Hakedoshah, hischaneni b’vakashah” — that if someone does not have enough of his own zechuyos to ask for a good year on Rosh Hashanah, he can ask the Torah to daven and ask Hakadosh Baruch Hu for a good year on his behalf. The Chofetz Chaim adds that the Torah will ask you: “Do you learn Torah, do you have respect for those who are learning Torah and do you support those who are learning Torah?” Only then can the Torah daven on your behalf.