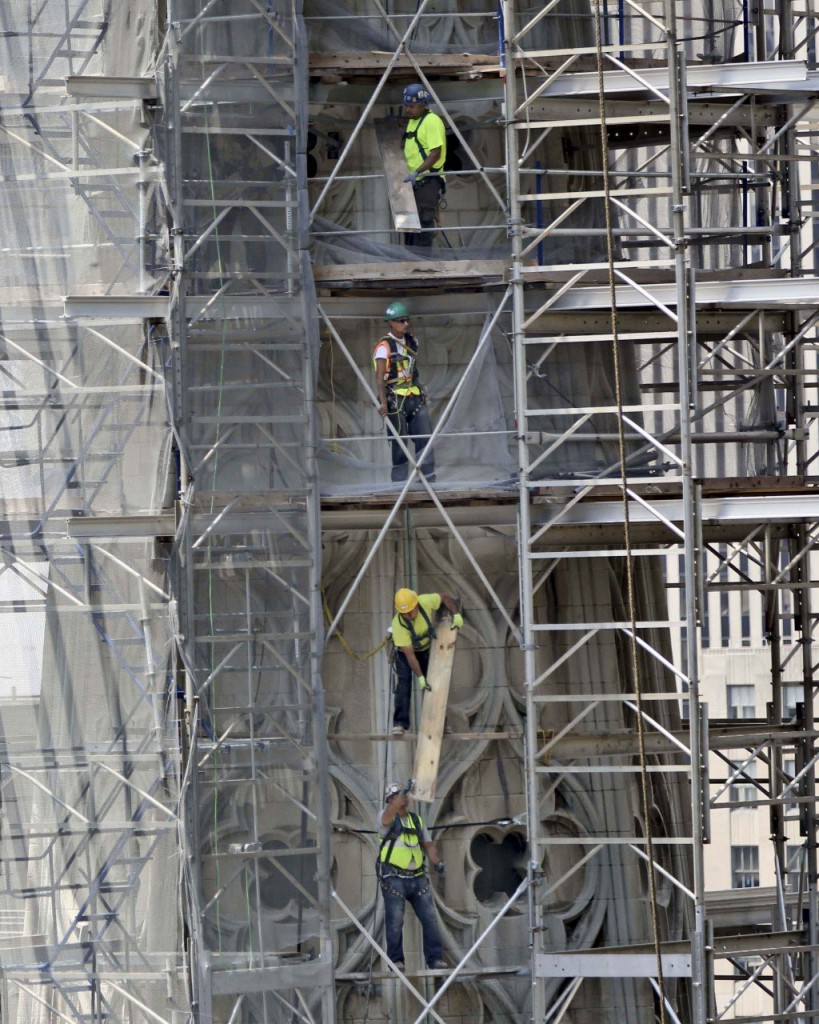 Years before skyscrapers, when New York City’s tallest building was still the 281-foot spire of Wall Street’s historic Trinity Church, state lawmakers passed the Scaffold Law, which made property owners and contractors liable for most “gravity-related” injuries to workers on construction sites.

As the years went by, and the buildings and dangers climbed ever higher, the 1885 law stayed on the books and allowed injured workers to collect big court verdicts for medical bills, pain and suffering. And it remained long after other states abandoned similar laws in favor of less costly federal workers’ compensation insurance.

Today, New York’s Scaffold Law, protected by the state’s powerful labor unions and trial lawyers, is the only one of its kind in the nation. It requires another layer of general liability insurance for contractors and hits taxpayers by adding hundreds of  thousands, even millions, of dollars to the cost of every public project.

Some New York government agencies and contractors say the cost of the insurance, which can often be double that of other states, is hitting a crisis point that could soon suspend work on bridges, schools and the recovery from Superstorm Sandy.

“It increases the cost of doing business and decreases what we are capable of doing in New York state,” said Carley Hill, of Union Concrete and Construction Corp. in West Seneca. “You are losing potential millions of dollars in jobs that could go to people.”

For example, building groups estimate that the law’s required liability insurance premiums will add an extra $200 million to $400 million to the state’s $5 billion replacement of the Tappan Zee Bridge.

New York City’s school system says the insurance cost it incurs from the law is enough to build two new schools every year, according to an internal document obtained by The Associated Press.

In western New York, the general liability insurance premium was $380,000 to cover rehabilitation on just 23 miles of the state Thruway.

That liability insurance existed in other states but was long ago replaced by federal workers’ compensation insurance, which requires workers to give up their right to sue for liability and provides standard payments for medical bills and lost wages as a quick way to settle claims without assessing blame.

What makes New York unique is that the Scaffold Law gives workers on all construction sites the ability to sue property owners and contractors directly for liability, which can include compensation for punitive damages or pain and suffering.

That has spawned multimillion-dollar settlements against construction companies, which have, in turn, driven up the premiums to pay for the general liability insurance.

Former General Motors Co. worker Tim Swedenhjelm of East Concord credits the law with helping him walk again after a 1999 accident when scaffolding collapsed on him, breaking bones in his back, paralyzing his leg and stopping his heart for two minutes. A big court award he didn’t want to divulge paid for more tests, four back surgeries and two knee surgeries.

“I would have been written off if it was just workers’ compensation,” he said.

But opponents of the law say taxpayers can no longer afford the cost of the required liability insurance, and public projects are reduced or lost at a time when New York’s job growth is already trailing that of the nation. Some also complain that the general liability insurance required by the law has become difficult to obtain.

“It is now fast becoming a crisis of availability,” said Mike Elmendorf, CEO of the Associated General Contractors. “If you can’t insure it, you can’t build it.”

Those were among the argument of business this year in the 2013 legislative session. Through a series of closed-door, unannounced negotiations, the perennial issue came perhaps closer than ever to substantial changes, according to players from both sides.

“For the first time, some of the trade unions are willing to sit down and have discussion,” said Senate Deputy Majority Leader Thomas Libous.

Meanwhile, powerful Assembly Speaker Sheldon Silver has been accused of blocking repeal or changes because he works for a Manhattan law firm that handles such cases and paid him $450,000 last year.

Brian Sampson of the business group Unshackle Upstate called the law “the symbol that continues to tie us to the dark old days of Albany where a few well-connected people and some behind closed doors ‘negotiations’ controlled nearly all legislative decisions.”

The Trial Lawyers Association alone has spread more than $2 million in campaign contributions since the 2010 elections to Democrats and Republicans in the Assembly and Senate as well as Gov. Andrew Cuomo, who would be a key to forcing changes it the law.

Mike McGuire of Construction and General Building Laborers Local 79 in New York City, who spent 16 years on high-rise construction sites, acknowledges the current system isn’t perfect and there may be room for compromise.

“The big guys are pretty good, they don’t nickel and dime,” McGuire said. But some smaller “bottom-of-the-barrel” operators cut corners with little regard for their, often temporary, employees, he said.

“There are inequities in every law,” McGuire said. “But if you get rid of it, the inequities are going to go 180 degrees. … It will favor the contractors and you put people’s lives in danger.”