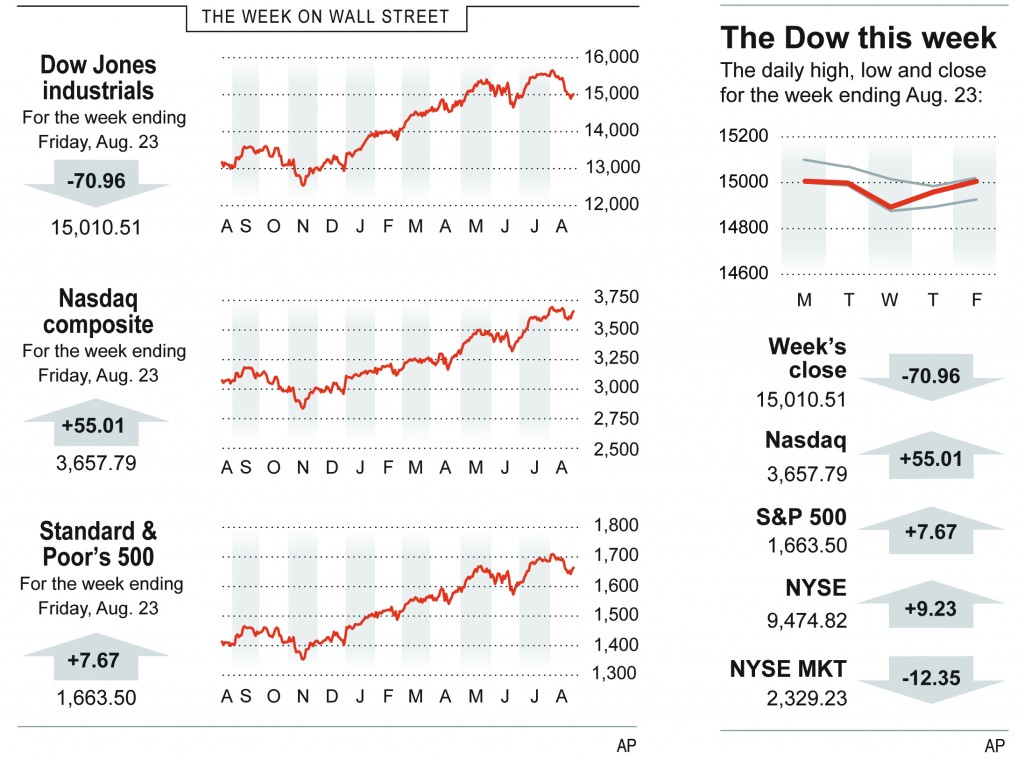 Microsoft had its biggest gain in four years after CEO Steve Ballmer said he will retire. Ballmer took the helm of the software company from founder Bill Gates in 2000. The company has struggled to adapt as consumers switch from desktop computing to mobile devices.

The giant software company is part of the 30-member Dow and its surge contributed more than a third of the index’s advance.

Stocks have sagged in August on concerns that the Federal Reserve will start to pull back on its economic stimulus. The Fed has been buying $85 billion in bonds every month to hold down long-term interest rates and encourage lending.

Minutes from the Fed’s July meeting released on Wednesday failed to give investors any clear indication of when the central bank will start slowing its bond purchases.

Some investors are using the summer slump as an opportunity to buy stocks at less expensive prices, said Joe Bell, a senior equity analyst at Schaeffer’s Investment Research. Stocks climbed to record highs at the start of the month.

Stocks are “getting more attention in the mainstream,” said Bell. “People are buying this pullback right now.”

The stock market stumbled at mid-morning after the government reported a plunge in new home sales, then drifted steadily higher in the afternoon. Trading volume was very light.

A boom in housing has supported this year’s rally in stocks. Now, the drop in sales has traders worried that the U.S. housing recovery could falter because of higher mortgage rates.

Traders reacted to the drop in home sales by buying bonds and gold, investments that become more attractive when the economy appears weaker.

The stock market may become more volatile in the coming weeks as traders try to anticipate the timing of the Fed’s move, said Randy Frederick, managing director of active trading and derivatives at the Schwab Center for Financial Research.

Investors will also start to follow the debt ceiling debate in Washington more closely, he said. The U.S. stock market plunged in the summer of 2011 when policy makers wrangled over lifting the borrowing limit and pushed the country closer to default.

“The softening we are seeing in the market, and the rise in interest rates, these are all in anticipation of these issues,” Frederick said. “Overall, I like the outlook for the rest of the year, I just don’t like the next four to six weeks.”

The Nasdaq composite rose 19.09 points, or 0.5 percent, to 3,657.79. The Nasdaq exchange was closed for most of the afternoon Thursday due to a technical glitch.

— Pandora Media, the online music streaming company, slid $2.80, or 13 percent, to $18.91 after the company issued a disappointing profit outlook for this quarter.

— Aeropostale slid $2.22, or 20 percent, to $8.76 after the teen retailer reported dismal quarterly results and issued a weak profit forecast.