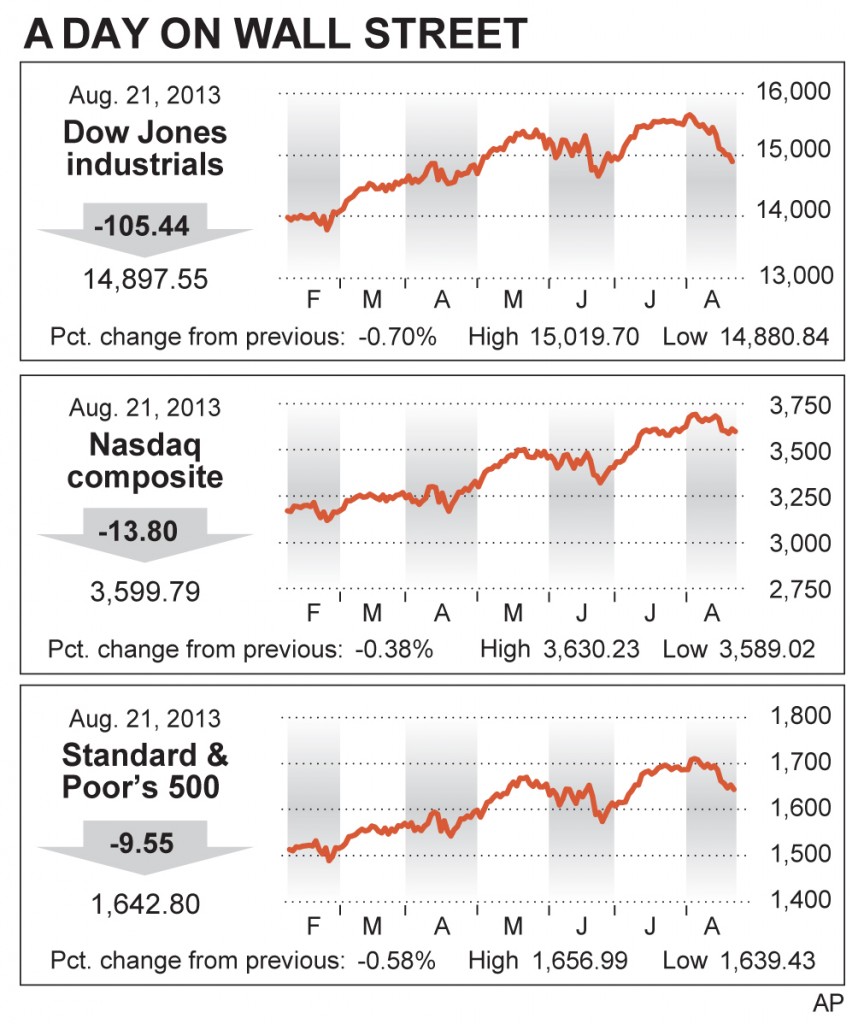 Stocks fell sharply Wednesday after the Federal Reserve disclosed that its top officials were mostly in agreement that the central bank should end its massive bond-buying program.

The Dow Jones industrial average fell 105 points. It was the index’s sixth straight decline, the longest losing streak since July 2012.

In the minutes from Fed’s July policy meeting, board members said it “might soon be time” to slow the purchases. The bond-buying program has been in place in one form or another since late 2008 to keep interest rates low and encourage economic growth.

Traders have been worried about weak earnings and have been looking for clarity on how and when the Fed will wind down its bond purchases. Some investors believe the Fed’s bond-buying has inflated stock prices.

Brad McMillan, chief investment officer for Commonwealth Financial, said the market had been overreacting to the possibility that the Fed is going to taper off its bond purchases.

“The market is starting to realize that, yeah, the taper is going to happen and, maybe, it won’t be the end of the world,” he said.

Guy Berger, U.S. economist with RBS Securities, said the Fed minutes were mostly in line with what the market had expected.

“The minutes are very consistent with what Fed members have been saying since June,” when Fed Chairman Ben Bernanke first laid out the idea of pulling back on bond purchases, Berger said.

The Fed has been purchasing $85 billion in bonds a month since December. Berger expects the Fed may reduce that to $65 billion after the central bank meets in September.

“August’s employment report will be very important,” he said.

Bond yields have risen dramatically the last few weeks as investors anticipate the end of the Fed’s program.

The yield on the benchmark 10-year Treasury note jumped sharply Wednesday, to 2.89 percent from 2.82 percent the day before. The 10-year note is used as a benchmark to determine interest rates on many types of loans, from individual mortgages to borrowing by large corporations.

Retail stocks were once again in focus, and not in a good way. Target, like many other retailers in the last two weeks, issued a muted sales outlook for the rest of the year. The stock dropped $2.45, or 3.6 percent, to $65.50.

Staples sank $2.57, or 15.3 percent, to $14.27 after the office supplies chain reported earnings and sales that missed expectations of financial analysts. The company also slashed its full-year profit forecast.

American Eagle Outfitters plunged $1.62, or 10 percent, to $14.27 after reporting that it had to slash prices because shoppers are reluctant to spend. American Eagle is the latest teen-apparel retailer to report disappointing earnings or cut their outlook, following Urban Outfitters and others.

One bright spot in retail was Home Depot competitor Lowe’s, which was up 3.9 percent, making it the second-biggest gainer in the S&P 500. The home-improvement retail chain said it earned 88 cents per share in the period ending Aug. 2, ahead of financial analysts’ expectations of 79 cents per share. The company also raised its full-year sales and profit forecasts, citing the improving outlook for the U.S. housing market.