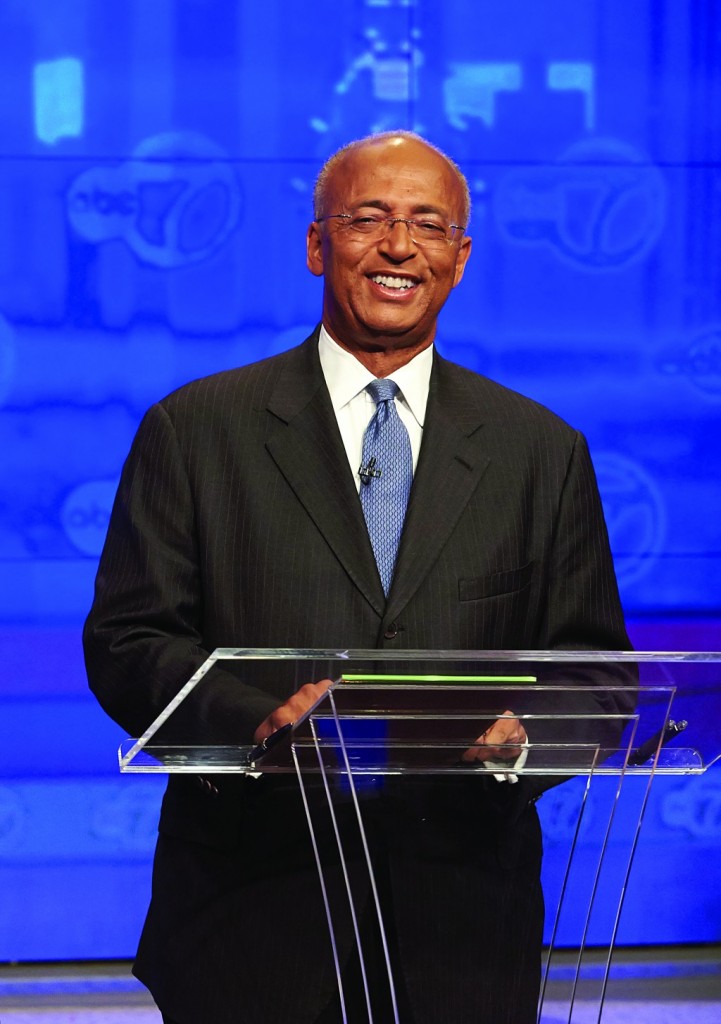 Bill de Blasio should renounce his endorsement by leftist activist George Soros over the latter’s publicized anti-Israel activism over the years, former Sen. Al D’Amato declared in a phone interview with Hamodia.

D’Amato, a former Republican U.S. senator from New York who is supporting Democrat Bill Thompson’s mayoral bid, said that support from the likes of Soros, who has called in the past for boycotting Israel to force them to cede territory to the Palestinians in the name of peace, is inappropriate for a New York City mayor.

“The United States, and New York City in particular, has had an unbreakable bond with the state of Israel,” D’Amato said. “And so, that means that the next person we elect as mayor will have a major platform, a major spokesperson, not only for New York but for our nation, as it relates to the safety and security of the people of the state of Israel.”

“That is why I find that Bill de Blasio’s decision to accept support from a known anti-Israeli, George Soros, is so deeply distressing and disturbing. And it troubles me as a New Yorker. And it should trouble every New Yorker, especially Jewish voters who want to maintain our city’s strong relationship with Israel.”

In a statement, Dan Levitan, de Blasio’s spokesman, skirted D’Amato’s call and said that the public advocate “has been one of Israel’s staunchest defenders against terrorist threats.”

Levitan also noted that de Blasio has successfully fought for carmakers to stop selling vehicles in Iran as long as that country continues its nuclear program, and has called on Saudi Airlines to call off a boycott of Jews in New York airports.

But D’Amato said that generic statements of support are insufficient.

“I call on Bill de Blasio, who I know and like, to renounce this support,” he said. “…This is about the future of the people of Israel and their country.”

Soros, a Hungarian-born Holocaust survivor who became a billionaire in the finance sector, has used his money to promote boycotting Israel until a peace agreement is reached, and has called on the United States to “impose” a settlement on Israel.

D’Amato, a senator from 1981 until his defeat by Charles Schumer in 1998, added that he hears “rumors” that Soros is planning a super-PAC to support de Blasio’s candidacy.

“Wouldn’t that be interesting?” he said. “Don’t be surprised.”

In supporting Thompson, D’Amato admits he has received flack from his fellow GOPers, but said that the party’s 20-year hold on the Democratic-leaning city is bound to end.

“I told them it is going to be very difficult for a Republican to win, and so I see as our best choice picking a Democrat who is a grownup, who isn’t going to give the town away,” he said.

He promised to continue his support for Thompson, a former city comptroller, even in the general election.

“I’m going to support Bill Thompson all the way through,” he said.

D’Amato has famously wrangled with Republican Mayor Rudy Giuliani in the 1990s, making his reluctance to back current GOP frontrunner Joe Lhota, a deputy mayor to Giuliani, understandable. And he is said to believe that John Catsimatidis and George McDonald, the other Republicans in the race, have no chance in November.

But if Thompson loses the primary, he says, “then I am going to reassess my position depending upon who wins the primary.”